The Effects of Solar Variability on Earth's Climate: A Workshop Report (2012)

Get This Book
Visit NAP.edu/10766 to get more information about this book, to buy it in print, or to download it as a free PDF.
« Previous: Front Matter
Page 1 Share Cite
Suggested Citation:"Overview." National Research Council. 2012. The Effects of Solar Variability on Earth's Climate: A Workshop Report. Washington, DC: The National Academies Press. doi: 10.17226/13519.
×

Solar irradiance, the flux of the Sun’s output directed toward Earth, is Earth’s main energy source.1 The Sun itself varies on several timescales—over billions of years its luminosity increases as it evolves on the main sequence toward becoming a red giant; about every 11 years its sunspot activity cycles; and within just minutes flares can erupt and release massive amounts of energy. Most of the fluctuations from tens to thousands of years are associated with changes in the solar magnetic field. The focus of the National Research Council’s September 2011 workshop on solar variability and Earth’s climate, and of this summary report, is mainly magnetically driven variability and its possible connection with Earth’s climate variations in the past 10,000 years. Even small variations in the amount or distribution of energy received at Earth can have a major influence on Earth’s climate when they persist for decades. However, no satellite measurements have indicated that solar output and variability have contributed in a significant way to the increase in global mean temperature in the past 50 years.2,3,4 Locally, however, correlations between solar activity and variations in average weather may stand out beyond the global trend; such has been argued to be the case for the El Niño-Southern Oscillation, even in the present day.

A key area of inquiry deals with establishing a unified record of the solar output and solar-modified particles that extends from the present to the prescientific past. The workshop focused attention on the need for a better understanding of the links between indices of solar activity such as cosmogenic isotopes and solar irradiance. A number of presentations focused on the timescale of the solar cycle and of the satellite record and on the problem of extending this record back in time. Highlights included a report of progress on pyroheliometer calibration, leading to greater confidence in the time history and future stability of total solar irradiance (TSI), and surprising results on changes in spectral irradiance over the last solar cycle, which elicited spirited discussion. New perspectives on connections between features of the quiet and active areas of the photosphere and variations in TSI were also presented, emphasizing the importance of developing better understanding in order to extrapolate back in time using activity indices. Workshop participants’ reviews highlighted difficulties as well as causes for optimism in current understanding of the cosmogenic isotope record and the use of observed variability in Sun-like stars in reconstructing variations in TSI occurring on lower frequencies than the sunspot cycle.

The workshop succeeded in bringing together informed, focused presentations on major drivers of the Sun-climate connection. The importance of the solar cycle as a unique quasi-periodic probe of climate responses on a timescale between the seasonal and Milankovitch cycles was recognized in several presentations. The signal need only be detectable, not dominant, for it to play this role of a useful probe.

1 G. Kopp, LASP, University of Colorado, “Overview and Advances in Solar Radiometry for Climate Studies,” presentation at the Workshop on the Effects of Solar Variability on Earth’s Climate, September 8, 2011.

Some workshop participants also found encouraging progress in the “top-down” perspective, according to which solar variability affects surface climate by first perturbing the stratosphere, which then forces the troposphere and surface. This work is now informing and being informed by research on tropospheric responses to the Antarctic ozone hole and volcanic aerosols. In contrast to the top-down perspective is the “bottom-up” view that the interaction of solar energy with the ocean and surface leads to changes in dynamics and temperature. During the discussion of how dynamical air-sea coupling in the tropical Pacific and solar variability interact from a bottom-up perspective, several participants remarked on the wealth of open research questions in the dynamics of the climatic response to TSI and spectral variability.

The discussion of the paleoclimate record emphasized that the link between solar variability and Earth’s climate is multifaceted and that some components are understood better than others. According to two presenters on paleoclimate, there is a need to study the idiosyncrasies of each key proxy record. Yet they also emphasized that there may be an emerging pattern of paleoclimate change coincident with periods of solar activity and inactivity, but only on long timescales of multiple decades to millennia. Several speakers discussed the effects of particle events and cosmic-ray variability. These are all areas of exciting fundamental research; however, they have not yet led to conclusive evidence for significant related climate effects. The key problem of attribution of climate variability on the timescales of the Little Ice Age and the Maunder Minimum were directly addressed in several presentations. Several workshop participants remarked that the combination of solar, paleoclimatic, and climate modeling research has the potential to dramatically improve the credibility of these attribution studies.

Next: 1 Background »
The Effects of Solar Variability on Earth's Climate: A Workshop Report Get This Book
× 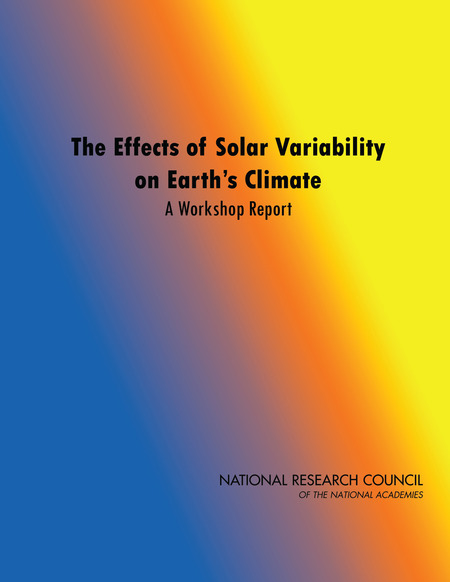 On September 8-9, 2011, experts in solar physics, climate models, paleoclimatology, and atmospheric science assembled at the National Center for Atmospheric Research (NCAR) in Boulder, Colorado for a workshop to consider the Sun's variability over time and potential Sun-climate connections.

While it does not provide findings, recommendations, or consensus on the current state of the science, The Effects of Solar Variability on Earth's Climate: A Workshop Report briefly introduces the primary topics discussed by presenters at the event. As context for these topics, the summary includes background information on the potential Sun-climate connection, the measurement record from space, and potential perturbations of climate due to long-term solar variability. This workshop report also summarizes some of the science questions explored by the participants as potential future research endeavors.