Building the Ohio Innovation Economy: Summary of a Symposium (2013)

Get This Book
Visit NAP.edu/10766 to get more information about this book, to buy it in print, or to download it as a free PDF.
« Previous: II: PROCEEDINGS
Page 25 Share Cite
Suggested Citation:"DAY 1 Welcome and Introduction." National Research Council. 2013. Building the Ohio Innovation Economy: Summary of a Symposium. Washington, DC: The National Academies Press. doi: 10.17226/13538.
×

Mr. Pogue, one of the chief organizers of the symposium, welcomed the audience. He noted that the National Academies, the University of Akron, and NorTech jointly planned and supported this conference.

He said that the conference, one of a series being held in various regions of the country by the National Academies, would address four broad themes. The first was the nation’s concern about “global challenges we all face in this very dynamic worldwide economy”—challenges that could be turned into export opportunities for American firms. The second was the effects of global competition on the economy in Ohio, specifically northeast Ohio. The region’s response to these challenges, he said, will determine the kind of place Ohio would be in the future. The conference would also review the “substantial progress we’re making, particularly in this region but throughout the state, in bringing together the public and private sectors to cooperate and create opportunities for the Ohio economy.” The fourth theme was to explore ways in which the sectors of society can work together in partnership, including the federal government, state government, Ohio foundations, the private sector, investors, and major universities.

In past years, Mr. Pogue said, Ohio has faced significant challenges in its core industries. “It’s important that we identify those challenges,” he said, “and understand what they mean, because policy solutions depend on clear understanding.” The state had responded effectively to many such challenges, he said, by taking advantage of its scientific and technical capabilities, and moving to newer, high-value industries. The state had also initiated programs to spur innovation and entrepreneurship, and some of those programs had been adopted as models by other areas. As examples he cited Jumpstart and the Innovation Fund at Lorain County Community College. “One goal of this conference,” he said, “is to develop a better understanding of what makes for effective programs, and how they might be leveraged throughout the state and beyond to promote economic growth.”

Mr. Pogue then introduced Mary Good, Dean of the College of Engineering and Information Technology at the University of Arkansas in Little Rock and member of the National Academies Board on Science, Technology, and Economic Policy. Dr. Good also chairs the National Academies’ Committee on State and Regional Innovation Initiatives, under whose auspices this conference was organized.

Dr. Good thanked the attendees for their participation on behalf of the National Academies’ Board on Science, Technology, and Economic Policy (STEP) and the Committee on State and Regional Innovation Initiatives. She said that the symposium was part of a series on Best Practices in State and Regional Innovation Initiatives. “Our study is reviewing state, regional, and Federal efforts to develop a robust manufacturing base,” she said, “and address critical national needs, such as development of renewable energy.”

A second goal of the study is to review best practices among state and regional innovation programs that seek to develop and reinforce high-technology clusters. The committee had held meetings on innovation policies in a number of states, she said, and had found them to be a diverse set. “This has given us some idea of the value of innovation strategies that are appropriate for small, medium, and large states; in those that have a strong tradition in manufacturing and those that do not.” Previous meetings had been held in Arkansas, Michigan, and Hawaii; the Ohio meeting would be followed by a symposium at the new nanotechnology cluster in Albany, New York.

Dr. Good called the Ohio conference an important part of the study because of the “substantial progress Ohio has made in addressing its many challenges. Specifically we hope to highlight best practices among innovation programs and their goals, structures, funding levels and mechanisms. We also hope to hear more about how Ohio is capitalizing on the Federal investments that have been made in developing a knowledge-based, innovation-led economy.”

Dr. Good closed by paying tribute to the organizers and supporters of the symposium, citing in particular the leadership of the George Gund Foundation of Cleveland, the lead sponsor, along with Dr. Luis Proenza of the University of Akron, Rebecca Bagley of NorTech, David Morgenthaler, and Richard Pogue. She then introduced Dr. Proenza, saying that “he has led the transformation of the University of Akron into a powerful engine for regional economic development, a catalyst for collaborative initiatives, and the preeminent public university in northeastern Ohio.”

Next: Keynote Address »
Building the Ohio Innovation Economy: Summary of a Symposium Get This Book
× 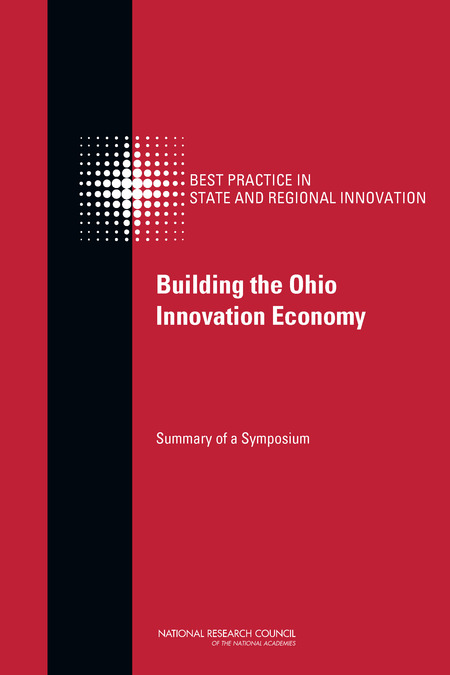 Since 1991, the National Research Council, under the auspices of the Board on Science, Technology, and Economic Policy, has undertaken a program of activities to improve policymakers' understandings of the interconnections of science, technology, and economic policy and their importance for the American economy and its international competitive position. The Board's activities have corresponded with increased policy recognition of the importance of knowledge and technology to economic growth.

One important element of STEP's analysis concerns the growth and impact of foreign technology programs. U.S. competitors have launched substantial programs to support new technologies, small firm development, and consortia among large and small firms to strengthen national and regional positions in strategic sectors. Some governments overseas have chosen to provide public support to innovation to overcome the market imperfections apparent in their national innovation systems. They believe that the rising costs and risks associated with new potentially high-payoff technologies, and the growing global dispersal of technical expertise, underscore the need for national R&D programs to support new and existing high-technology firms within their borders.

Similarly, many state and local governments and regional entities in the United States are undertaking a variety of initiatives to enhance local economic development and employment through investment programs designed to attract knowledge-based industries and grow innovation clusters. These state and regional programs and associated policy measures are of great interest for their potential contributions to growth and U.S. competitiveness and for the "best practice" lessons that they offer for other state and regional programs. STEP's project on State and Regional Innovation Initiatives is intended to generate a better understanding of the challenges associated with the transition of research into products, the practices associated with successful state and regional programs, and their interaction with federal programs and private initiatives. The study seeks to achieve this goal through a series of complementary assessments of state, regional, and federal initiatives; analyses of specific industries and technologies from the perspective of crafting supportive public policy at all three levels; and outreach to multiple stakeholders. Building the Ohio Innovation Economy: Summary of a Symposium explains the of the study, which is to improve the operation of state and regional programs and, collectively, enhance their impact.