Visit NAP.edu/10766 to get more information about this book, to buy it in print, or to download it as a free PDF.
Page i Share Cite
Suggested Citation:"Front Matter." National Research Council. 1988. Statistical Models and Analysis in Auditing: A Study of Statistical Models and Methods for Analyzing Nonstandard Mixtures of Distributions in Auditing. Washington, DC: The National Academies Press. doi: 10.17226/1363.
×

STATISTICAL MODELS AND ANALYSIS IN AUDITING A STUDY OF STATISTICAL MODELS AND METHODS FOR ANALYZING NONSTANDARD MIXTURES OF DISTRIBUTIONS IN AUDITING Pane! on Nonstandard Mixtures of Distributions Committee on Applied and Theoretical Statistics Board on Mathematical Sciences Commission on Physical Sciences, Mathematics, and Resources National Research Council NATIONAL ACADEMY PRESS Washington, D. C. 1988

PREFACE The Committee on Applied and Theoretical Statistics (CATS) senses under the National Research Council's Board on Mathematical Sciences. CATS was created In 1977 in response to concerns about the uses of statistics in applications to the mathematical and physical sciences. The mandate of the Committee includes the foDow~ng: To maintain the awareness and promote We health of the discipline of statistics. To provide a base within the National Research Council for evaluating applications of statistics to the physical and computing sciences. To encourage the effective use of statistics in physical and computer science. To identify crucial questions in theoretics statistics whose solutions could have major consequences for applied statistics. To initiate studies, including interdisciplinary efforts, on problems of national and scientific importance. The first activity of the Committee was to hold a meeting at the Airlie House, Virginia, on February 9-11, 1978, involving both statisticians and scientists from the physical and earth sciences. Seventeen important problem areas for future emphasis were identified, and brief reports of their descriptions were prepared. These included for example the problems of large data bases, statistical computation, risk assessment and complex modeling. In the ten years that CATS has been in operation, a number of these and other topics have been considered for further study. There remain many other key areas where need for concerted attention remains. Examination of the state of the interface between statistics and auditing was one of the first interdisciplinary projects undertaken. On October 1, 1980, the Panel on Nonstandard Mixtures of Distributions was appointed under the chairmanship of Dr. Donald Guthne. The original purpose of the panel was "to review the existing general methodology of estimation procedures for mixtures of distributions, as well as methodology specific to applications in engineering and the physical sciences, the health sciences, and auditing and accounting." The members of the Panel constituted three subpanels representing the three general subject areas mentioned in the preceding quote. The subpanel for accounting and auditing included S. E. Fienberg, I. Neter, D. M. Roberts and A. J. Wilbum. Meetings and discussions were held by the subpanels and by He Panel as a whole dunug 1981. Preliminary outlines for a report were assigned and some draft material was discussed at a meeting of subpanel editors in 1983. Subsequently, an interim decision was made by CATS to restrict the focus of the report to the important special problems a. V11

conceming nonstandard mixtures mat arise within Be area of statistical methodology in auditing. It was also decided to expand He subpanel for accounting and audimng. To this end, Dr. H. Tamura was added to the Pane! on August 30, 1985 so tot Us expense in auditing come ~ used to assist in the completion of the Report The survey of existing methodologies, Chapter Il. and He post-1981 updating of the subpanel's annotated bibliography. Chapter IV, have been prepared by Dr. Tamura, who has undertaken the overall responsibility for He report since his appointment to the Panel in 1985. The present report is He result of the efforts of many. In particular, I would express my gratitude to me chairman and members of He Panel as weld as to the members of CATS dung the term of this project. The completion of this project may not have been possible without the determined oversight of the previous chair of CATS, Ralph Bradley, who provided detailed comments to all of the preliminary drafts. I would also gratefully acknowledge He support of He staff of the Board of Mathematical Sciences under He direction of Frandc Gilfea~er. Ronald Pyke, Mailman of CATS, July, 1987 ·~e v'''

ACKNOWLEDGMENTS The preparation of dais report has benefited gready fiom the comments and suggestions of many people who reviewed several easier Crafts of He Report. Moreover, others have graciously provided their expertise to clarify technical issues as they arose. ~ addition to past and present members of CATS and Be members of Me Panel, we wish to express our appreciation to Wm. F. Felix, University of Arizona, I. Godfrey, University of Georgia, L. Headl, University of Washington, K. W. Stringer, New York University, and R. Bartyczak, T. Lieb, R. Weakland and D. Wilt of the Internal Revenue Service. Their considerable assistance is gratefully acknowledged. 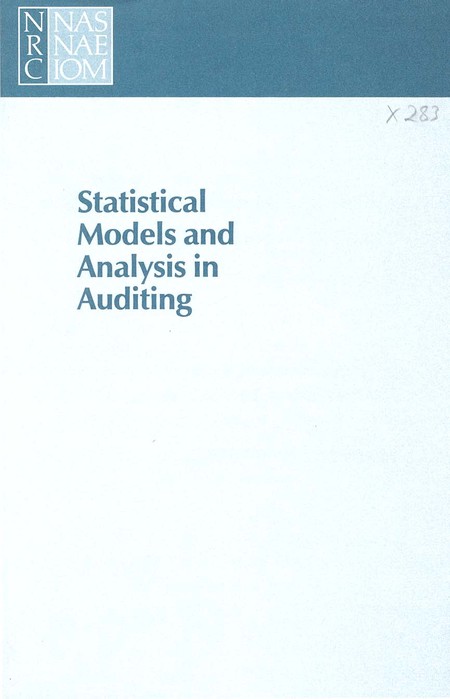 Buy Paperback | $40.00
MyNAP members save 10% online.
Login or Register to save!
Stay Connected!