Toward an Understanding of Global Change: Initial Priorities for U.S. Contributions to the International Geosphere - Biosphere Program (1988)

Visit NAP.edu/10766 to get more information about this book, to buy it in print, or to download it as a free PDF.
Page i Share Cite
Suggested Citation:"Front Matter." National Research Council. 1988. Toward an Understanding of Global Change: Initial Priorities for U.S. Contributions to the International Geosphere - Biosphere Program. Washington, DC: The National Academies Press. doi: 10.17226/1393.
×

Preface Throughout its life on this earth, our human species has faced a varied en c! ever-changing environment. We humans have enjoyed great success. We have learned how to survive, and indeed how to prosper, in winter's cold and summer's heat, and in environments as diverse as Amazonian jungles, Saharan deserts, and arctic steppes. We have not only adapted to the world as we found it; we have turned forests into fields, bent rivers to water deserts, and wrested fuels and goods from the earth itself. Our success has not been achieved without cost. In exploiting the earth's riches for our ends, we are necessarily changing our planet in myriad ways. Sophisticated observers on Mars would note not only our cities, our highways, and the Great Wall of China, but also the disappearance of tropical forests, rapid changes in the composition and radiative characteristics of our atmosphere, and the dramatic annihilation of our protective ozone layer over the Antarctic. They might speculate that further changes could eventually affect the planet's ability to sustain life. They might further suppose that a species clever enough to produce such changes would be astute enough to worry about them. Fortunately, they would be right. Concern about the Tong-term changes humanity is inducing in its planetary environment has indeed been mounting for some decades in the scientific community, and for some years in the broader com- munities of the general public. Fortunately again, this concern about v

human-caused change has built upon a long-growing scientific pre- occupation with natural change in the earth. Scientists have learned that the earth's history has been characterized by ceaseless change, that most of mankincl's' history has been lived in a wintry glacial age, and that our vaunted civilization has flowered in a single brief interglacial summer. But while we have learned much about what has happened, we still understand discouragingly little about why it happened. We have, however, learned that we have no hope of understand- ing the changes of the past, and still less of predicting the changes of the future, by IGoking piecemeal at one or another aspect of this com- plicated planet. If we are concerned with the decades and centuries ahead, we cannot ignore the linkages that have shaped the planet's past and present. The atmosphere has been largely manufactured by life; the ocean's currents have been driven by the atmosphere, and the ocean's living things have been nourished by airborne dust and riverine sediments; and, throughout the ages, climate and life have been inescapably intertwined. We must dare to seek an under- standing of the earth as a single system of which we ourselves are an increasingly important part. This challenge motivated groups of scientists in the early years of this decade to advance the venturesome proposal that science at- tempt fully integrated studies of the Tong-term future and continued habitability of the globe. These proposals led to searching studies of the goals and requirements for research and observational efforts in earth system science to study the problems of global change. Encour- agingly, it was concluded that advances in our capabilities to observe the earth, notably from the vantage point of space, and in our ability to deal with massive and diverse data, made such a quest feasible. Thus, advances in both understanding and capabilities led to pro- posals for the development of an International Geosphere-Biosphere Program (IGBP) to focus the efforts of the worId's scientists on the problem of global change. The objective of the IGBP is to develop the scientific understand- ing needed to anticipate future changes in the earth system. Such predictive information provides the foundation for decision makers to develop policies that respond to global change. Thus, in addition to the immense scientific challenge, the scientific community wiD face the equally difficult challenge of effectively communicating the results of the IGBP to those responsible for formulating policies. Turning such broad goals into concrete projects and plans is V1

no easy task. It demands that scientists shed their Tong-embedded traditions of narrow disciplinary study, and summon the courage to attack together problems that are both exceedingly difficult and surpassingly urgent. Within the United States, many elements of a broad research program in the earth sciences are already being devel- oped within the federal agencies. These federal efforts wiD provide the indispensable foundation for U.S. contributions to the worldwide study of global change problems. In parallel, plans for the IGBP are being elaborated by a Special Committee of the International Coun- ciT of Scientific Unions. Thus organized programs on the problems of global change are currently in their preparatory phases, in which scientific goals are being sharpened, potential projects explored, and resource requirements identified. The task of the Committee on Global Change is to serve as a channel for information, advice, and guidance among the U.S. scientific community, the federal agencies, and the international planning mechanisms in the developmer~t and implementation of these studies of global change. The purpose of this report is to identify early U.S. contributions to the internationally defined IGBP during this preparatory phase of its planning. The initiatives proposed were based upon a review by our committee of the current state of knowledge of the earth system as seen from several discipline-oriented perspectives. These reviews were organized by various members of the committee with the involvement of numerous experts from the scientific community. For example, small workshops were held on biological systems and dynamics in terrestrial and marine systems, and on biogeochemical dynamics. A number of experts were also consulted to provide com- ments on background documents prepared by committee members on the climate and hydrologic system and on the human dimension of global change. These efforts culminated in the background papers included in Part II of this report. These background papers provided the basis for a week-long study by the committee, together with invited experts from academia and government, held in March 1988 at Oracle, Arizona. The com- mittee sought to identify a small number of scientific questions that demanded to be addressed by the U.S. scientific community now, in the preparatory phase of the IGBP. and regardless of the cro~ram's .. . . , . . . ~ ~ v ~ a- -c~- ultimate design. Thus the committee emphasized questions that were fundamental to the understanding of long-term changes in the earth system, and issues that because they cut across conventional disciplinary perspectiveswere not being adequately addressed in · . V11

ongoing programs. Part I of this report presents the results of that analysis. As the international and national programs evolve, the on- going dialogue within the scientific community on the questions that need to be addressed will continue. Thus the committee expects to supplement these recommendations regarding early initiatives in the program with more complete studies, reviews, and scientific plans. i: Throughout the preparation of this report, an enormous number of people aided the committee. We are greatly indebted to the scientists listed in connection with the individual background papers, who gave so freely of their time to participate in workshops and in the drafting and review of manuscripts. We also thank the many colleagues who reviewed early versions of the report. A number of representatives of the federal agencies participat- ng in the Committee on Earth Sciences of the Federal Coordinating Council on Science, Engineering, and Technology have worked excep- tionally closely with our committee, and have greatly enriched our deliberations. Within the National Research Council, our committee has operated under the supervision, and with the steadfast support, of an ad hoc coordinating committee consisting of the chairmen of the Commissions on Physical Sciences, Mathematics, and Resources; Life Sciences; and Behavioral and Social Sciences and Education; and the foreign secretary. With the aid of these groups, we believe that we have forged a new and uniquely productive form of inter- action and partnership among many federal agencies with diverse missions and many scientific disciplines with diverse concerns and constituencies. Finally, we are most appreciative of the support of the com- mittee's staff at the National Research Council: John Perry, Ruth DeFries, Doris Bouadjemi, and Cristina Rosenberg. Harold A. Mooney, Chairman Committee on Global Change · · vail

Next: Summary of Recommendations »
Toward an Understanding of Global Change: Initial Priorities for U.S. Contributions to the International Geosphere - Biosphere Program Get This Book
× 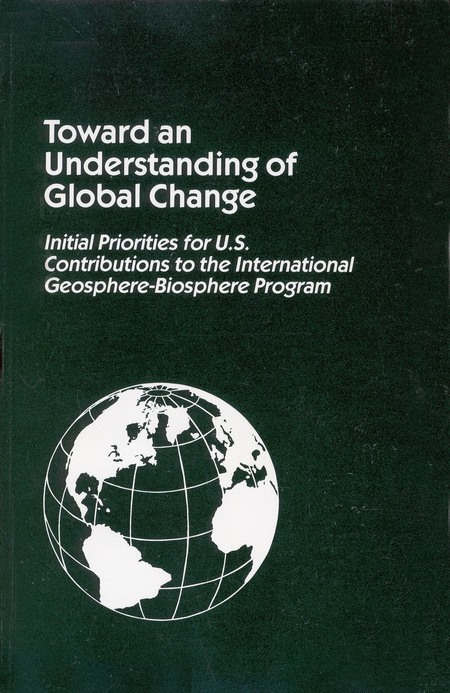 Buy Paperback | $65.00
MyNAP members save 10% online.
Login or Register to save!
Stay Connected!