Visit NAP.edu/10766 to get more information about this book, to buy it in print, or to download it as a free PDF.
« Previous: Yacon
Page 124 Share Cite
Suggested Citation:"Part II: Grains." National Research Council. 1989. Lost Crops of the Incas: Little-Known Plants of the Andes with Promise for Worldwide Cultivation. Washington, DC: The National Academies Press. doi: 10.17226/1398.
×

PART II Grains To the Incas, corn (whose origins are in Mexico and Central America) was a sacred grain and a major food, but climate restricted its cultivation to lower elevations. At altitudes where corn could not thrive, it was replaced by kaniwa, kiwicha, and quinoa. In pre-Hispanic times, these three native grains ranked as staple foods, but they were superseded by the wheat, barley, and oats brought by the Spaniards. Subsequently, the production of native grains fell drastically. In recent decades, it has dropped even further as imported grains particularly U.S. wheat have been available at subsidized prices. Also, the increasingly urbanized and media-dominated lifestyles in the Andean region have lured people away from their cultural roots. As a result, the traditional grains are now mostly cultivated in marginal lands and are consumed by people on the fringes of the predominant society. But for all that, kaniwa, kiwicha, and quinoa have outstanding qualities and are beginning to return to general favor. The Peruvian government, for example, is fostering their increased production- including tariff supports for exports and promotion of their use in processed productsespecially for combating childhood malnutrition in the highlands. All three native grains are broad-leaved plants rather than grasses like wheat, rice, corn, and the other conventional cereals.) They are highly tolerant of marginal conditions. Kaniwa and quinoa are adapted to cold and drought; kiwicha to drought. They are cultivated at elevations up to the rarefied heights of the Andean snow line. There, where few crops can survive the dry air, short seasons, and cold soil, their cultivation goes back thousands of years. ' One South American grass domesticated as a food grain was Bromus mango. Not a true Andean plant, it comes from Chiloe Island and the adjacent Chilean coast. Cultivation was abandoned during the last century after the introduction of wheat. Until recently, domesticated varieties were believed extinct, but a dramatic rediscovery of the plant in Argentina was reported in 1987. Information from R. Reid. 124

GRAINS 125 These three grains are also outstandingly nutritious. Their food value relates particularly to their unusual proteins. All food proteins are composed of differing amounts of 20 amino acids. A few of these cannot be manufactured in the body and are generally referred to as "limiting," because once the body runs out of any one of them, it stops synthesizing proteins. In most plant proteins the three limiting amino acids are lysine, methionine, and tryptophan. But in the protein of kaniwa, kiwicha, and quinoa, the levels of lysine and tryptophan are excellent and the methionine level is adequate. This makes these three grains unusual among plant foods. Indeed, they approach animal foods such as milk or meat in their protein quality. The current limitation of native grains is their low productivity. This can be overcome. Researchers have shown, for example, that sub- stantial yield increases can be achieved through applying a little fertilizer and through the use of better selected seeds. Given such attention, the ancient grains of the Incas seem capable of yielding as much as the best products of modern scienceespecially under marginal conditions. In overall production, none seem likely to rise to the heady heights of wheat, rice, and corn (the world's top three cereal crops), but they all can play a much bigger role in feeding the world than they do today. KIWICHA IN PERU Kiwicha is described in a later chapter (page 139), but here we present the history of its recent resurrection in the Andes. Our purpose is to provide an example of what can be accomplished with the now little- known grains (as well as the other types of crops) that once fed the Incas. After hundreds of years of lying dormant, kiwicha is being reborn. The "midwife" pulling it into the modern world and breathing new life into it is Luis Sumar Kalinowski, a scientist from the ancient Inca capital, Cuzco. Sumar and his colleagues proudly call themselves "kiwilocos"- because, they say, they're crazy about kiwicha. In global terms, today's kiwicha plantings are still small, but they are astounding considering that just 10 years ago the plant had all but vanished. Peru's commercial kiwicha cultivation had risen to more than 700 hectares by 1988, not including several hundred hectares cultivated by farmers for their own use. These days, people looking down into the Sacred Valley of the Incas the Vilcanota can see it studded once more with brilliant red kiwicha fields. Peruvian farmers produced about 1,200 tons of kiwicha grain in 1988, most destined for a children's breakfast program in the Cuzco schools. Now, in Peru's village markets and city supermarkets, the grain can be found in both raw and processed forms, ranging from breakfast foods to

GRAINS developing new food crops. One key feature is that they are developing and promoting the crop simultaneously. Thus, while selecting improved strains and breeding new varieties, they are also visiting farmers and designing suitable implements such as planting and harvesting machines. Moreover, they are investigating the grain's chemistry, processing meth- ods, and culinary uses. Public interest is now so high that kiwicha is one of the most lucrative crops in Peru. In 1988, farmers were paid 40 intis per kg for kiwicha grain compared with 20-26 intis for corn, 14 intis for barley, and 15-16 intis for wheat. In the Quillabamba area, at least one farmer earned twice as much per hectare from kiwicha as from coca leaves. And excitement for the ancient Inca grain is spilling over beyond the borders of Peru. For instance, the United Nations Children's Fund (UNICEF) has provided funds for Sumar to stimulate kiwicha-growing in Bolivia and Ecuador. In agronomic qualities, the kiwicha plant has made remarkable advances. When the researchers started their work in the early 1980s, top yields were around 1,800 kg per hectare and the average was much lower; now top yields are commonly 5,000-6,000 kg per hectare in experimental plots; average yields are about 3,000 kg per hectare. A major advance in yield improvement came when types with large, upright seedheads were found. Before that, the plants had "dangling" heads that tended to spill their seed on the ground. (Sumar says, "Kiwicha was asleep five years ago.") Today's erect types can be cultivated mechanically because few of the seeds fall out when the plants are bumped or shaken. None of this came easily. The researchers initially gathered 400 lines from different sites and altitudes throughout Peru. After four years of evaluation, 16 lines appeared to have good disease resistance and the potential for high yields in a broad range of environments. After three more years, however, only two lines proved promising for profitable production in farmers' fields. While searching for types with good field performance, the researchers also located types likely to show good market performance. These had large white seeds with good cooking characteristics. The big breakthrough came when they perfected a blower that could separate large, heavy seeds from small, light seeds (for example, those that were incompletely filled or had loose seed coats). The bigger seeds showed much better germination and vigor, were easier to harvest and handle, and were much more acceptable in the marketplace. By simultaneously tackling market requirements and farmers' require- ments, the researchers have stimulated modern interest in a truly lost crop of the Incas and laid the foundation for its long and lasting future. 127

Next: Kaniwa »
Lost Crops of the Incas: Little-Known Plants of the Andes with Promise for Worldwide Cultivation Get This Book
× 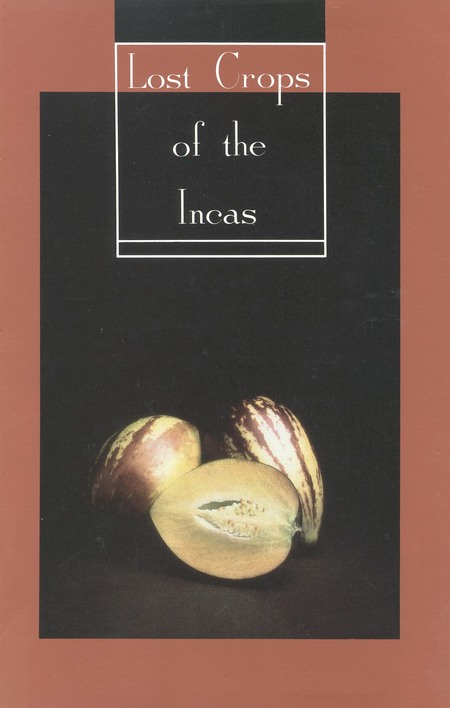