Visit NAP.edu/10766 to get more information about this book, to buy it in print, or to download it as a free PDF.
Page i Share Cite
Suggested Citation:"Front Matter." National Research Council. 1989. Contaminated Marine Sediments: Assessment and Remediation. Washington, DC: The National Academies Press. doi: 10.17226/1412.
×

PREFACE The problem of contaminated marine sediments has emerged as an environmental issue of national importance. The pervasive and widespread nature of the problem has resulted from decades of using coastal waters intentionally or unintentionally for waste disposal. Harbor areas in particular have been found to contain high levels of contaminants in bottom sediments due to wastes from urban, industrial, and riverine sources, as well as navigation. Legislative authority for the management of contaminated marine sediments falls largely under three statutes: the Comprehensive Environmental Response, Compensation, and Liability Act of 1980 (CERCLA), the Marine Protection, Research, and Sanctuaries Act (MPRSA), and the Clean Water Act (CWA). The Comprehensive Environmental Response Compensation and Liability Act of 1980, as amended by the Superfund Amendments and Reauthorization Act (SARA) of 1986, is aimed at the clean-up and remediation of inactive or abandoned hazardous waste sites, regardless of location. Superfund sites are currently ranked by the Environmental Protection Agency (EPA) based on the hazard they may pose to human health and the environment via releases to ~r~r.~+ ~ ~ - As At ^~ m; ~ ~~V~W~-G`' =~= We ~11~ Aft- Underwater accumulations of hazardous wastes in marine environments are unlikely to threaten human health except by way of food chain exposure, which is not currently addressed in EPA's hazard-ranking process. Under the 1986 Superfund amendments, however, EPA was required to modify its Hazard Ranking System to address " the damage to natural resources which may affect the human food chain and which is associated with any release (of a hazardous substance)" (Section 105(a)~2~. It is likely, therefore, that once this amendment is there will be a s ignif icant increase in the number of "underwater Superfund sites" in both coastal and inland areas. Meanwhile, the Clean Water Act of 197(), as amended by the Water Quality Act of 1987, gives EPA lead responsibility for safeguarding the quality of U.S. coastal and inland waters. This includes regulating the disposal of dredged and fill materials (shared with the U.S. Army Corps of Engineers, under Section 404), and removing in-place toxic pollutants in harbors and navigable waterways (under Section 115~. The 1987 amendments added new authorities requiring EPA to study and conduct projects relating to the removal of toxic pollutants from Great v

Lakes bottom sediments (Section 118(c)(3)); and to identify and implement individual control strategies to reduce toxic pollutant inputs into contaminated waterway segments (Section 304~1~. In response to Title II of the Marine Protection, Research, and Sanctuaries Act of 1972 (PL 92-532) and the National Ocean Pollution Planning Act, the National Oceanic and Atmospheric Administration (NOAA) Office of Marine Pollution Assessment conducts comprehensive interdisciplinary assessments of the effects of human activities on estuarine and coastal environments. Among these assessment activities is the National Status and Trends Program (NST), which attempts to create, maintain, and assess a long-term record of contaminant concentrations and biological responses to contamination in the coastal and estuarine waters of the United States. This assessment provides some insight into the extent of contamination nationally. As a result of legislative responsibility and programmatic interests, a wide variety of federal agencies have shown active interest in this subject. EPA's responsibilities under Superfund and the CWA are the source of its interests in water quality concerns and remediation of uncontrolled hazardous waste sites. The U.S. Army Corps of Engineers (COE) is involved because of its responsibility to dredge and maintain navigable rivers and harbors. The COE also assists in the design and implementation of remedial clean-up actions under Superfund. NOAA has responsibility for assessing the potential threat of Superfund sites to coastal marine resources as a natural resource trustee as well as under its NS&T program. The U.S. Fish and Wildlife Service has legal authority for various endangered coastal species, food chain relationships, and habitat considerations, all of which are potentially impacted by contaminated sediments. The Navy has had experience in assessing contaminated sediments and now must grapple with such problems in locating and maintaining homeports for Navy vessels. In response to this emerging problem, the National Research Council convened the Committee on Contaminated Marine Sediments. The members of the committee were selected for their expertise and to ensure a spectrum of viewpoints. Their expertise spanned the fields of aquatic toxicology, dredging technology, resource economics, sediment dynamics and transport, benthic ecology, environmental law, and public policy. Biographies of committee members appear in Appendix A. Consistent with the policy of the National Research Council, the composition of the committee reflected the competing biases that might accompany expertise vital to the study in an effort to seek balance and fair treatment of the subject. The committee convened a symposium and workshop with invited papers in order to determine the extent and significance of contaminated sediments, review the state of practice of technology for clean-up and remediationm identify and assess alternative management strategies, and identify research and development needs and issues for subsequent technical assessment. The committee agreed that contaminated sediments should not be defined simply on a generic basis or as those sediments containing some level of synthetic chemicals or background substances above normal V1

concentrations due to human activities. If so, all sediments would be defined as contaminated. However, for the sake of this report, the committee believed the following could be used as a working definition: Contaminated sediments are those that contain chemical substances at concentrations which pose a known or suspected environmental or human health threat. The committee also recognized the importance of issues related to ultimate sources of contamination and competing uses of the affected areas; however, these subjects were beyond the scope of this study. The invited papers of the symposium and workshop focused on the extent of contamination nationwide, methods for classification of sediment contamination, risks to human health and the ecosystem, sediment resuspension and contaminant mobilization, remedial strategies and technologies for handling contaminated sediments, and lastly, five case studies of the different ways in which a variety of sediment contamination problems are being handled. They included the PCB problem in New Bedford Harbor, Massachusetts; PCBs in the upper Hudson River, New York; kepone contamination of the James River, Virginia; the variety of chemicals contaminating Commencement Bay, Washington; and the Navy Homeport Project in Everett Bay, Washington. The committee met three times, including once after the two and one-half day symposium and workshop in Tampa, Florida. The symposium lasted one and a half days, during which presentations of invited papers were made. The subsequent one-day workshop was composed of two consecutive work groups. The first one discussed the extent, classification, and significance of contaminated sediments, and the resuspension of sediments. The second work group discussed the selection of management strategies and remedial technologies for handling contaminated sediments and the case studies exemplifying marine sediment contamination problems and their remediation. This report is in part a proceedings of the symposium and workshop. It contains all of the invited papers and a summary of the deliberations of the work groups. It also contains a discussion of the major findings and recommendations of the committee with regard to the issues covered in the meeting. The entire report has been reviewed by a group other than the authors, but only the summary and workshop reports have been subjected to the report review criteria established by the National Research Council's Report Review Committee. The papers have been reviewed for factual correctness. nil

ACKNOWLEDGMENTS The committee would like to express its gratitude to a number of individuals whose assistance has been of great benefit in the development of this report. The committee thanks each of the invited speakers whose informative papers were the focus of the symposium and workshop. A special thanks is also extended to Walter Kovalick, Jr., Deputy Director of EPA's Office of Emergency and Remedial Response for his delivery of a stimulating and informative luncheon address. Appreciation is also conveyed to the rapporteurs of each work group, Dr. Michael Palermo of the U.S. Army Engineer Waterways Experiment Station and Dr. Jack Anderson of the Southern California Coastal Water Research Project, for their assistance in preparing the workshop summaries. The committee also thanks all of the workshop participants (listed in Appendix B) for their participation and valuable remarks during the workshop discussions. Finally, the committee extends its thanks to the government liaison representatives whose participation in the committee meetings, the symposium and workshop, and contributions to this report were invaluable: Robert R. Bersson, Naval Facilities Engineering Command; John Cunningham, U.S. Environmental Protection Agency; Kim Devonald, U.S. Environmental Protection Agency; Norman R. Francingues, U.S. Army Engineer Waterways Experiment Station; David B. Mathis, U.S. Army Corps of Engineers; Andrew Robertson, National Oceanic and Atmospheric Administration; John Rogers, U.S. Fish and Wildlife Service; and, Christopher H. Zarba, U.S. Environmental Protection Agency. viii r

Next: Executive Summary »
Contaminated Marine Sediments: Assessment and Remediation Get This Book
× 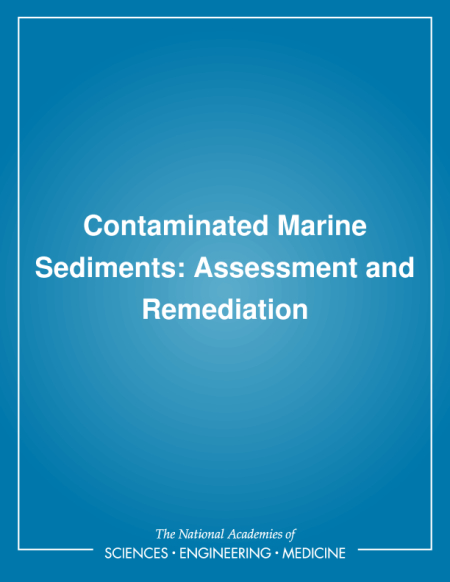 The pervasive, widespread problem of contaminated marine sediments is an environmental issue of national importance, arising from decades of intentionally and unintentionally using coastal waters for waste disposal. This book examines the extent and significance of the problem, reviews clean-up and remediation technologies, assesses alternative management strategies, identifies research and development needs, and presents the committee's major findings and recommendations. Five case studies examine different ways in which a variety of sediment contamination problems are being handled.