Contraception and Reproduction: Health Consequences for Women and Children in the Developing World (1989)

Visit NAP.edu/10766 to get more information about this book, to buy it in print, or to download it as a free PDF.
Page i Share Cite
Suggested Citation:"Front Matter." National Research Council. 1989. Contraception and Reproduction: Health Consequences for Women and Children in the Developing World. Washington, DC: The National Academies Press. doi: 10.17226/1421.
×

( ONTRACEPllON AND hEPRODUCIION Health Consequences for Women and Children in the Developing World Working Group on the Health Consequences of Contraceptive Use and Controlled Fertility Committee on Population Commission on Behavioral and Social Sciences and Education National Research Council NATIONAL ACADEMY PRESS Washington, D.C. 1989

Preface This report is one of a series of studies that have been carried out under the auspices of the Committee on Population to examine the consequences of changes in demographic behavior, particularly as they influence the lives of people in the developing world. In 1986 a working group of the committee released a landmark study of the consequences of population growth for the economic development of the Third World. This report concentrates on what many analysts regard as an equally important aspect of the demographic behavior of couples in developing countries, namely, the health consequences of different patterns of childbearing and contraceptive use. This report focuses on the health effects for mothers and their children of changes in the timing of pregnancies, the interval between them, and the number of children women have. In addition, it provides an overview of what is known about the health risks and benefits of different contraceptive methods used in the developing world. Throughout, the report focuses on the consequences that changes in the number and spacing of pregnancies and the ages of childbearing would have on the health of individual women and children, their families, and the larger population. This report and the research on which it is based deal almost entirely with the situation in the developing world, in counties that are characterized by low per capita income and limited health services. On the basis of a comprehensive review of the available evidence, the working group concludes that reproductive patterns exercise an important influence on the health of women and children. Moreover, the working group believes that a series of public policy measures related to reproduction could be undertaken that would improve the health of mothers and children in developing countries. In the view ·  V11

· · ~ Vlll PREFACE of the working group, improving the performance of family planning programs may have significant effects on the health of women and children. We have written this report for a scientific audience. It will probably be most congenial and most useful to researchers actively involved in studies of the relationship between reproduction and health in developing countries. In addi- tion, we hope that the report will be useful to others: to policy makers who may be concerned about the possible utility of family planning programs as a health intervention, as well as to students, both in the United States and throughout the developing world, who are interested in the relationship between health and reproduction, whether they are in research-oriented programs or in training in public health or clinical service. Although the report is undeniably technical in orientation and approach, we have attempted, through the executive summary, the glossary, and the style of presentation throughout, to make it accessible to a wide audience. In carrying out its study, the working group commissioned experts in the field to prepare background papers. These papers, which are listed in the appendix, deal with specific topics related to health and fertility, and they contributed significantly to this report. A volume containing the papers of greatest interest will be published separately later this year. The committee and the working group very much appreciate the efforts of those who prepared these background papers. The paper by Susan Zimicki provided a basis for Chapter 3. The paper by Nancy Lee, Herbert Peterson, and Susan Cho provided a basis for Chapter 4. The paper by John Haaga provided the basis for parts of Chapter 5. Chapter 6 is an expanded version of a draft initially prepared by James McCarthy. The other background papers were also influential in the working group's deliberations and in the drafting of this report. The Working Group on Health Consequences of Contraceptive Use and Con- trolled Fertility met six times to discuss the background papers, to review the relevant scientific literature and other studies of similar topics that were under way or recently completed, and to discuss and review the various drafts of this report. In addition, working group member Anne Pebley spent much of the summer of 1988 working full-time on this report at the Committee on Popula- tion's offices. Each member of the working group also participated in several smaller, less formal meetings during which specific aspects of the report were reviewed. The Committee on Population undertook this study at the request of the Agency for International Development (AID), which asked for an authoritative assessment of the health consequences of the changing patterns of fertility and the increasing use of modern contraceptives that have been taking place in develop- ing countries as an aid in designing its program of assistance to developing countries. The Rockefeller Foundation also provided significant support for this project through a grant to the Committee on Population; the Rockefeller Founda- tion support allowed considerable flexibility in preparing the report and facilitated

PREFACE iX wide dissemination by making possible translations of the report into Spanish and French. The William and Flora Hewlett Foundation also provided support for the working group through a grant to the Committee on Population. The committee and the working group appreciate the work provided by Peter J. Donaldson, study director, and Susan M. Rogers, research associate. Special thanks are also due Allan McMillan Parnell, research associate, who had principal responsibility for coordinating the preparation of this report. Laurence Grummer- Strawn, who served as a research assistant to the working group during the summer of 1988, also made important contributions to the report. Jeremiah Sullivan and Ann Way, of the Demographic and Health Surveys, provided some of the data used in Chapter 6. Michael Koenig provided data on infant and maternal mortality from Bangladesh. Carol Bradford skillfully prepared all figures in the report. Sivaporn Pokpong, a student at the University of Michigan, Audrey Vanden Heuvel, a student at the University of Norm Carolina, Irma Elo, a student at Princeton University, and Lisa Brecker all assisted in compilation of materials and preparation of tables. The committee and the working group especially appreciate the help received from Christine L. McShane, editor of the Commission on Behavioral and Social Sciences and Education. The working group responsible for this report was composed of a carefully selected, balanced group of experts with backgrounds in both medical and social sciences. The Committee on Population is very grateful to the members of this group for their hard work, and particularly to William Foege and Julie DaVanzo, who served as chair and cochair, respectively, and to Anne Pebley, whose concen- trated effort contributed greatly to the report. ALBERT I. BRMALIN, Chair Committee on Population

Next: Executive Summary »
Contraception and Reproduction: Health Consequences for Women and Children in the Developing World Get This Book
× 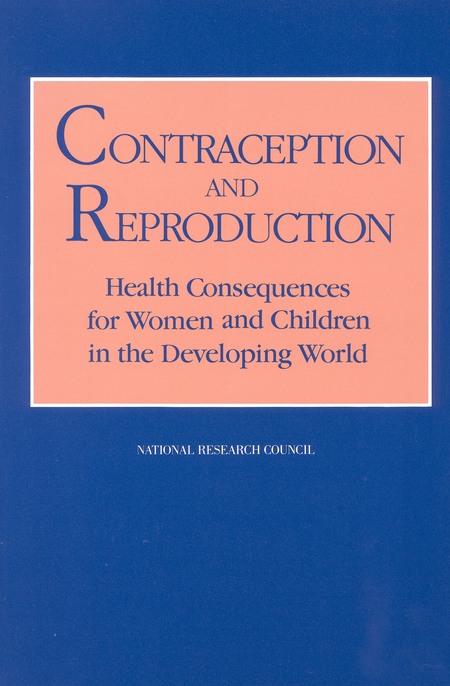