Infectious Diseases of Mice and Rats (1991)

Get This Book
Visit NAP.edu/10766 to get more information about this book, to buy it in print, or to download it as a free PDF.
Page i Share Cite
Suggested Citation:"Front Matter." National Research Council. 1991. Infectious Diseases of Mice and Rats. Washington, DC: The National Academies Press. doi: 10.17226/1429.
×

Infectious Diseases of Mice and Rats

Committee on Infectious Diseases of Mice and Rats

NOTICE: The project that is the subject of this report was approved by the Governing Board of the National Research Council, whose members are drawn from the councils of the National Academy of Sciences, National Academy of Engineering, and Institute of Medicine. The members of the committee responsible for the report were chosen for their special competences and with regard for appropriate balance.

The Institute of Medicine was established in 1970 by the National Academy of Sciences to secure the services of eminent members of appropriate professions in the examination of policy matters pertaining to the health of the public. The Institute acts under the responsibility given to the National Academy of Sciences by its congressional charter to be an adviser to the federal government and upon its own initiative to identify issues of medical care, research, and education. Dr. Samuel O. Thier is president of the Institute of Medicine.

The National Research Council was established by the National Academy of Sciences in 1916 to associate the broad community of science and technology with the Academy's purposes of furthering knowledge and advising the federal government. Functioning in accordance with general policies determined by the Academy, the Council has become the principal operating agency of both the National Academy of Sciences and National Academy of Engineering in the conduct of their services to the government, the public, and the scientific and engineering communities. The Council is administered jointly by both Academies and the Institute of Medicine. Dr. Frank Press and Dr. Robert M. White are chairman and vice-chairman, respectively, of the National Research Council.

This project was supported by the National Cancer Institute, National Institutes of Health, under contracts NO1-CM-57644 and NO1-CM-07316. administered by the Division of Cancer Treatment.

No part of this book may be reproduced by any mechanical, photographic, or electronic process, or in the form of a phonographic recording, nor may it be stored in a retrieval system, transmitted, or otherwise copied for public or private use, without written permission from the publisher, except for the purposes of official use by the United States Government.

COMMITTEE ON INFECTIOUS DISEASES OF MICE AND RATS

Department of Comparative Medicine, Schools of Medicine and Dentistry, University of Alabama at Birmingham, Birmingham, Alabama

Progress in biomedical science leads inexorably to greater refinements in scientific methodologies. In recent years it has become apparent that further refinement is needed in the quality of laboratory mice and rats. The scientific community has increasingly recognized that infectious diseases in these species significantly alter many research results. Unfortunately, the literature on this subject is voluminous, scattered, and often confusing, with the result that its practical application has been disappointing. Additional material on control of infections in immunodeficient rodents can be found in Immunodeficient Rodents: A Guide to Their Immunobiology, Husbandry, and Use, 1989, report of the Institute of Laboratory Animal Resources (ILAR) Committee on Immunologically Compromised Rodents (Washington, D.C.: National Academy Press. 246 pp.).

This text is an expansion of the newly revised second edition of the Companion Guide to Infectious Diseases of Mice and Rats. It is intended to serve as a detailed reference of principles, methods, and facts to be applied by biomedical scientists in improving the quality of animals required in individual research settings. The expanded text is written for students of infectious disease and for investigators and veterinarians who want more detail than that contained in the companion guide. There are three main parts. Part I, "Principles of Rodent Disease Prevention," summarizes the basic concepts and practices of infectious disease exclusion and detection, and gives data on the prevalence of infectious agents in contemporary rodent populations. Part II, "Individual Disease Agents and Their Effects on

Research," gives in a synoptic format the factual information deemed most pertinent to understanding the importance, epizootiology, pathogenesis, diagnosis, and control of natural infections due to each agent, complete with a listing of the known instances in which each agent has interfered with research. Part III, "Indexes to Diagnosis and Research Complications of Infectious Agents," contains tabular information intended for use as an aid to diagnostic problem solving.

Many people have contributed to the compilation of the information in this report. The outlines in Part II were patterned after those in the first edition of the handbook, but have been extensively revised by one of us (J. R. L.) through many years of teaching a course on diseases of laboratory animals and have been further revised by this committee. The many contributions of the faculty and students in the Department of Comparative Medicine at the University of Alabama at Birmingham are gratefully acknowledged. In addition, the following gave invaluable advice on specific agents: Drs. Gail H. Cassell and Jerry K. Davis, University of Alabama at Birmingham (mycoplasmal infections); Dr. C. A. Bruggeman, Department of Medical Microbiology, State University of Limburg, Maastricht, The Netherlands (rat cytomegalovirus); Dr. Steven W. Barthold, Yale University (mouse hepatitis virus); Dr. Steven L. Vonderfecht, Johns Hopkins University (rat rotavirus-like agent); Dr. James R. Ganaway, National Institutes of Health, Bethesda, Md. (Bacillus piliformis); Dr. Anton M. Allen, National Institutes of Health, Bethesda, Md. (mousepox); and Dr. Lizbeth M. Kraft, National Aeronautics and Space Administration/Ames Research Center, Moffett Field, Calif. (poxviruses of rats). Dr. Kenneth Boschert, formerly a postdoctoral fellow at the University of Alabama at Birmingham, assisted with compiling information for the diagnostic indexes in Part III. Drs. Fred Quimby and Melvin Balk provided review at each stage of preparation for the ILAR Council. Special gratitude is due Ms. Doris Whatley and Ms. Audrey Farrow, who typed the manuscript through numerous revisions.

Next: I. Principles of Rodent Disease Prevention »
Infectious Diseases of Mice and Rats Get This Book
× 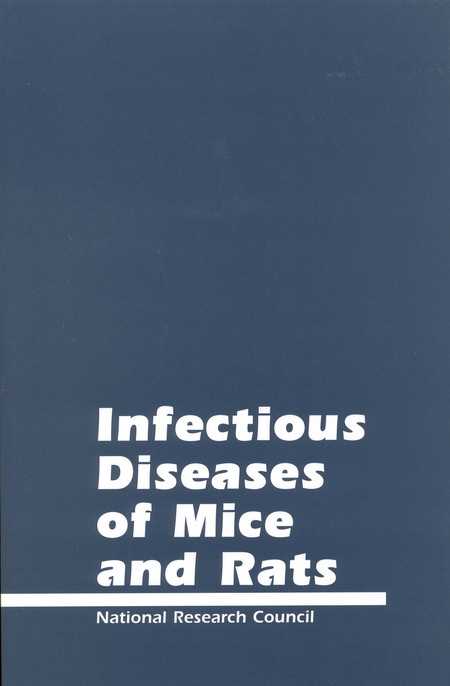 This new edition—a must for all researchers who use these lab animals—provides practical suggestions for breeding, keeping, and identifying pathogen-free laboratory rodents. It contains three informative sections. The first, Principles of Rodent Disease Prevention, summarizes methods for eliminating infectious agents. It offers information on pathogen terminology; pathogen status of rodents; and breeding, transporting, isolating, testing, and diagnosing rodents. The second section, Individual Disease Agents and Their Effects on Research, describes the diagnosis and control of each infectious agent, and the last section, Diagnostic Indexes: Clinical Signs, Pathology, and Research Complications, contains informative tables covering all the diseases listed in the volume, arranged to help in the diagnosis of infected animals.