Visit NAP.edu/10766 to get more information about this book, to buy it in print, or to download it as a free PDF.
Page i Share Cite
Suggested Citation:"Front Matter." Institute of Medicine. 1990. Nutrition During Pregnancy: Part I: Weight Gain, Part II: Nutrient Supplements. Washington, DC: The National Academies Press. doi: 10.17226/1451.
×

Preface In the quest for a favorable outcome of pregnancy, namely, delivery of a full-term, healthy infant of appropriate size, pregnant women have long directed their attention to weight gain and dietary intake. However, despite many reports on the subject published since the early 1970s, consensus has not been reached regarding recommendations for gestational weight gain. Furthermore, many women and health care providers in the United States have become concerned about the adequacy of the usual dietary intake of nutrients during pregnancy. Consequently, vitamin-mineral supplemen- tation during pregnancy has become widespread. Recognizing a need to examine these issues carefully, the Bureau of Maternal and Child Health and Resources Development of the U.S. Department of Health and Human Services (DHHS) asked the National Academy of Sciences to conduct a study of maternal nutrition. In response, the Committee on Nutritional Status During Pregnancy and Lactation was formed in the Food and Nu- trition Board, Institute of Medicine, and subcommittees were appointed to focus on specific aspects of the overall charge. The first two of the commit- tee's reports are presented in this volume as Part I, Nutritional Status and Weight Gain, and Part II, Dietary Intake and Nutrient Supplements. These reports are preceded by an overall summary (Chapter 1~. The third report of the committee, to be published within the year, will focus on nutrition during lactation. The major objective of the Subcommittee on Nutritional Status and Weight Gain During Pregnancy was to evaluate the scientific evidence and formulate recommendations for desirable weight gains during pregnancy. . . V11

. . . V111 PREFACE The Subcommittee on Dietary Intake and Nutrient Supplements During Pregnancy evaluated the scientific evidence and formulated recommenda- tions on vitamin, mineral, and protein supplementation during gestation. Both subcommittees were asked specifically to consider the justification for special recommendations for pregnant adolescents, women over age 35, and women of black, Hispanic, and Southeast Asian origin. The approaches to the study are described in detail in the separate introductions to the two parts of the report. This volume should be widely used both by researchers and students seeking a fuller knowledge of pregnancy and by health care providers seek- ing guidance for practice. Therefore, we have included some discussions of value to both these groups as well as some that will be less relevant to one or the other. Both subcommittees benefited from advice and suggestions provided by the Committee on Nutritional Status During Pregnancy and Lactation, from the sharing of information between the subcommittees, and from the assistance provided by the Food and Nutrition Board and its Subcommittee on the Tenth Edition of the Recommended Dietary Allowances. The committee and subcommittees appreciate the support provided by the Food and Nutrition Board staff headed by Dr. Sushma Palmer (until September 1989) and including Drs. Virginia Laukaran and Chessa Lutter (prior to August 1988), Dr. Carol West Suitor (beginning August 1988), Mrs. Frances Peter, Ms. Marian Millstone, Ms. Wilhelmena Tamale, Ms. Sandra Johnson (until November 1989), and Ms. Janie Marshall. Many people made important contributions to this combined report by giving presentations, providing the subcommittees with data or special writ- ten reports or analyses, sharing their views during workshops, commenting on drafts, or otherwise serving as resource persons. In particular, the com- mittee and subcommittees wish to thank Dr. Judith Brown, University of Minnesota; Dr. Neville Coleman, Bronx Veterans' Administration Medical Center; Dr. Catherine Cowell, Bureau of Nutrition, City of New York; Dr. Jan Dodds, Bureau of Nutrition, New York State; Dr. J. V. G. ~ Durnin, University of Glasgow; Dr. Jan Ekstrand, University of Iowa; Dr. Virginia Ernster, University of California, San Francisco; Dr. J. David Erickson, Centers for Disease Control; Dr. J. M. Gertner, New York Hospital; Dr. J.-P. Habicht, Cornell University; Dr. Suzanne Harris, Food and Consumer Services, U.S. Department of Agriculture (USDA); Mr. Jay Hirshman, Food and Nutrition Service, USDA; Dr. Frank Hytten, retired; Ms. Patricia Jensen, Santa Clara County Department of Health, California; Ms. Heidi Kalkwarf, Cornell University; Dr. Susan Krebs-Smith, Human Nutrition Information Service, USDA; Ms. Lynn Kuba, Childbirth Educator, Fairfax County, Va.; Ms. Alice Lenihan, National Association of WIC (Supple- mental Food Program for Women, Infants, and Children) Directors; Ms.

Next: 1 Summary »
Nutrition During Pregnancy: Part I: Weight Gain, Part II: Nutrient Supplements Get This Book
× 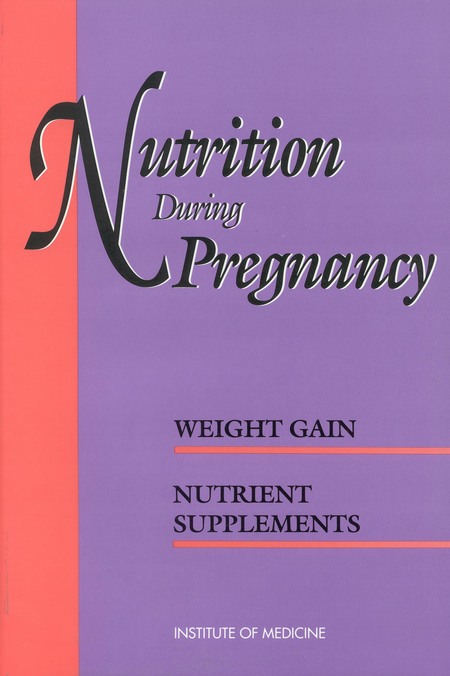 Part II addresses vitamin and mineral supplementation during pregnancy, examining the adequacy of diet in meeting nutrient needs during pregnancy and recommending specific amounts of supplements for special circumstances. It also covers the effects of caffeine, alcohol, cigarette, marijuana, and cocaine use and presents specific research recommendations.