Chapter:The Accuracy of Position Determinations by VLBI Expected by the Year 2000

The Accuracy of Position Determinations by lILBI Expected by the Year 2 0 0 0 Alan E. E. Rogers MIT Haystack Observatory Westford, Massachusetts 01886 INTRODUCTION Very-Long-Baseline Interferometry (VLBI) was first used for geodetic measurements in 1972 following the development of VLBI in the late 1960s for the astronomical study of radio sources whose angular size is a few millarcseconds or less and whose structure cannot be resolved with conventional connected element interferometers. In geodetic VLBI the relative arrival time (see Figure 1) of signals from distant quasars is measured by recording digitized samples on magnetic tape for cross- correlation at a central processor. A hydrogen maser frequency standard provides a precise frequency reference for the receiver's local oscillators as well as a time standard for the digitization and data formatting as illustrated in Figure 2. A delay precision which greatly exceeds the inverse recorded bandwidth is achieved by recording 14 2 MHz bandwidth channels from S- and X-band in a fashion illustrated in Figure 3. The method, which is known as "bandwidth-synthesis", (Rogers, 1970) allows a very wide bandwidth to be spanned with acceptable delay sidelobes and ambiguity spacing provided enough channels are available with minimum redundancy in spacings. The S- and X-band channels are used to provide separate group delays whose appropriate linear combination provides a delay almost free of the ionospheric path delay. A complete description of the MKIII VLBI system has been given by Clark et al., (1985~. Present Level of Accuracy. For the past eight years geodetic measurements made using the MKIII have achieved centimeter level repeatability in the measurement of baseline length. A statistical analysis of the repeatability of 100 baselines measured by the NASA Crustal Dynamics Project has been made by Clark, (1987~. The length repeatability from this analysis is approximately given by 5 mm plus 2 x 10-9 times the length and Table 1 lists the repeatability of some of the more frequently measured baselines. The fractional term is mostly the result of an r.m.s. error in the vertical of about 2 cm which maps into length in an amount which is proportional to length. Table 2 gives a list of the various error sources which will be discussed in more detail later. The root sum square (RSS) is approximately in agreement with present experience. System Noise. The signal to noise ratio (SNR) is given by SNR = LAF(2BT) i12/~2KT3)

115 where A is the effective antenna area (or geometric mean for antennas of different sizes), F is the radio source flux, 2BT is number of data bits recorded in integration time T. T3 is the system temperature, K is Boltzman's constant, and L is a digital processing loss factor of about 0.6. The standard deviation in the estimate of group delay is equal to the inverse of the product of SNR and r.m.s. spanned bandwidth (measured in radians/sec) and is equal to 80 ps (2.4 cm) at X-band for 10-meter antennas of 50 percent efficiency and 60-K system temperatures observing a 1 Jansky (10~26 Wm~2 Hz-~) radio source with 200 seconds of integration at the normal 56 Mbit/s data recording rate of the MKIII. Improved receivers using High Electron Mobility Transistors (HEMT) are expected to reduce system temperature to 30 deg K and improvements in recorder technology already support a 512 Mbit/s rate. While the system noise is not a major error source, its contribution is important in experiments with weak geometry such as very long baselines for which the mutual visibility is poor or experiments with small mobile antennas. ,`; . , Instrumental Calibration. Drifts in the receiver and cable delays are calibrated by injecting pulses (about 30 ps duration) into the receiver at a 1 MHz rate. These pulses generate a low-intensity rail of signals spaced 1 MHz apart which, when mixed to video, are made to appear as 10- KHz tones in the upper sideband passbands by offsetting the local oscillators. Extraction of the phases of these tones in the data processing serves to calibrate the the phase delay of each 2-MHz-wide passband. At present some systems are limited by the presence of spurious signals from the digital electronics which corrupts the phases of the calibration tones. This limit will be reduced to a negligible level by better isolation of the I.F. electronics. The electrical length of the cable which feeds the calibrator is electronically measured to allow correction for changes due to temperature or flexure. Other Instrumental Errors. Antenna flexure and changes in the axis intersection with tower expansion are significant error sources in some of the larger antennas used as base stations although these errors can be accurately modelled. A more subtle instrumental error source exists in present systems which is due to the variation of group delay in the antenna feed with position angle. Since the calibration signals are injected after the feed, these errors go uncorrected. These errors are the result of frequency dependent polarization impurities in the present feed and can be isolated by examining the "closure" of delays measured on a triangle of baselines. Atmospheric Limits. As can be seen from the table, the atmosphere is thought to be the largest error source. There are two distinctly different methods currently employed to correct for the atmospheric path delays. The first method is largely one of 'self-atmospheric calibration'' in which the unmodelled "wet" atmospheric zenith delay after correction of the data for the delay through the 'I cry" troposphere is derived by least square analysis every few hours or for each observation using a Kalman filter. In this method it is important to include observations at low elevations to separate the atmospheric delay

116 signature from the signature of a station height as illustrated in Figure 4. In the second method the atmospheric delay for both dry and wet components is calibrated by barometric pressure and water vapor radiometry (WVR), respectively. The first or self-calibration method is limited by errors in the dry atmospheric "mapping function" (Davis et al., 1985), or elevation dependence which depends on the atmospheric lapse rate and height of the troposphere as well as the pressure and temperature at ground level. The second or direct calibration method is also limited by a knowledge of the mapping function although not so severely since low angle observations are not required and can be avoided. In addition, the direct calibration is limited by the accuracy of the ground pressure measurement needed to derive the dry atmosphere zenith path and any breakdown in the assumption of hydrostatic equilibrium used to derive the path length from ground pressure. Further, the derivation of the wet delay from the WVR measurements (Resch, 1984) is subject to errors due to the departure of the atmosphere from the model assumed for the estimate of the "retrieval" coefficients. Better site dependent algorithms for the conversion of WVR data to wet path delay are now being developed. However, because there may be a bias in the WVR determined wet delay or a bias in the dry delay which results from barometer calibration errors or other unknown cause, the direct method is usually combined with the estimation of a bias for each experiment. At the present state of the art, the two methods are producing almost the same level of accuracy or marginally better results with the second method and the latest generation of WVRs capable of measuring the wet delay to better than 1 cm as inferred from the repeatability of results. Both methods assume azimuthal symmetry for the dry delay and hence, are equally limited by the presence of horizontal gradients. Perhaps the real promise for future improvements will come with an understanding of the biases between WAR determined path delays and the wet path delay solutions using VLBI data which may well be errors in the model for the dry delay. In addition, the incorporation of a horizontal gradient and mapping function parameters in the self-calibration may improve results if there is enough "geometric strength" in the data to allow for the estimation of additional parameters which are highly correlated with existing parameters. The Very Long Baseline Array (VLBA). The National Radio Astronomy Observatory (NRAO) under contract to the National Science Foundation (NSF) is building an array of ten new 25-meter antennas to form a network of stations dedicated to VLBI. The antennas which span the United States, with antenna in Hawaii and another in the Virgin Islands (see Table 3), will be equipped with the new generation of VLBI electronics and recorders (which support a data rate up to 512 Mbit/s). The VLBA will be used for both astronomy and geophysics. Geodetic VLBI methods will be used to determine the station locations, earth rotation, polar motion, earth tides, tectonic plate motion, ocean loading, other geophysical parameters needed to provide the highest accuracy astrometry which might, for example, be used to search for perturbations which might indicate the presence of planets in orbit around nearby stars. The ten VLBA antennas combined with an effective aperture of 79 meters

117 or a single VLBA antenna using 256 Mbit/s recording could operate with an ultracompact transportable VLBI system using an antenna as small as one meter and reducing the cost of making high accuracy geodetic ties to remote locations. SUMMARY At the present time atmospheric calibration is the dominant error source and will probably remain as the ultimate limit. Instrumental errors and errors due to source structure are likely to be reduced to a negligible level in the next decade. It is likely that the fractional accuracy of baseline length measurements will improve to 1 x 10-9 or perhaps 5 x 10-~°. ACKNOWLEDGEMENT Geodetic VLBI research at the Haystack Observatory is supported by the National Aeronautics and Space Administration under Contract NAS-5-29120. Haystack Observatory has designed and prototyped data acquisition and recording systems for the NRAO VLBA under Contract AUI-216. 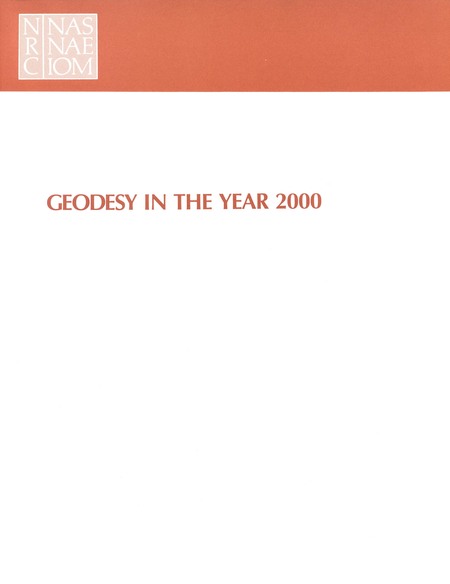