Reshaping School Mathematics: A Philosophy and Framework for Curriculum (1990)

Visit NAP.edu/10766 to get more information about this book, to buy it in print, or to download it as a free PDF.
Page i Share Cite
Suggested Citation:"Front Matter." National Research Council. 1990. Reshaping School Mathematics: A Philosophy and Framework for Curriculum. Washington, DC: The National Academies Press. doi: 10.17226/1498.
×

Ill Preface As momentum for change in U.S. education continues to grow, questions about the nature and goals of mathematics education take on increasing urgency. Several recent reports have opened a national dialogue on these issues. The purpose of this new report is to focus that discussion on fundamental issues that transcend particular details of current curricula or assessment results. Two documents set the stage. Everybody Counts: A Report to the Nation on the Future of Mathematics Education (National Research Council, 1989) establishes the need for change in the way we teach mathematics and outlines a plan of action. Curriculum anal Evaluation Stanc/ards for School Mathematics (National Council of Teachers of Mcsthematics, 1989) provides objectives for mathematics curricula and assessment that build effectively on present practice and knowledge. Although implementation of these stanclarcis will necessarily be slow for practical reasons, the expectations expressed in the Standarcis are fully attainable toclay. Indeecl, many schools with innovative programs already implement the spirit of mathematics education expressed in the Standards. In effect, the Stanclarcis represent goals for the first stage of a national effort to reshape mathematics education, an effort expectecl to last well into the next century. This Philosophy and Framework provides a supporting rationale for the first stage and for transition to the next stage. By suggesting a new practical philosophy of mathematics, supported by fundamental but forwarcl-looking principles and goals, it opens a door to a whole new vision of mathematics eclucation, The American public expects improvement in school performance. As countless changes are tried in thousands of districts of every size and type, progress will depend on consistency of purpose. The Mathematical Sciences Education Board (MSEB) intends to keep the spotlight of reform on long- term objectives to guide the journey of all who work for beneficial change. This Philosophy and Framework illuminates important issues that must be clarified wherever curriculum reform is to take place. It should help advance the cause of reform by insuring a common foundation for our efforts. On behalf of the entire Boarcl, I want to express my appreciation to the Curriculum Framework Task Force, and especially to its chairman, Anthony Ralston, for energetic and sustained work on the early drafts of this report. The key insights into fundamental long-term goals were framed and

iv developed by the Task Force during the early years of the MSEB. The process was guided with pragmatism and wisdom by the MSEB Curriculum Committee, chaired by Henry 0. Pollak. Special thanks are also clue to Lynn A. Steen who shaped the final document by combining Board and Task Force thinking, and to Lincla P. Rosen who served as staff director for the entire project. Shirle,~'Hill, Chairman An' ~~~ ~ Mathemati361 Sciences Eclucation Board December 1989

xi Foreword The purpose of this document is to propose a framework for reform of school mathematics in the United States. One essential step in achieving reform of mathematics education is to reshape the curriculum; others include improving the education of teachers of mathematics, preparing effective descriptions of achievement in mathematics, developing better means of assessing performance of students, and preparing more effective and appropriate instructional materials. Although all of these matters are considered in this report, the central message concerns curriculum. In the past century, there have been numerous attempts to change the mathematics curriculum of U.S. schools, starting with the Committee of Ten in the l890s oncl inclucling, among others, the New Mathematics of the 1960s and the National Council of Teachers of Mathemotics (NCTM) Agenda for Action of 1960. Some of these attempts at change have had modest success; others have had little. Toclay, as we enter the final decade of the century, the need to achieve curriculum reform is perhaps more urgent than at any time in the past. In particular, we emphasize in this document two fundamentally important issues discussed in Everybocly Counts ond in the NCTM Standards: · Changing perspectives on the need for mathematics, the nature of mathematics, and the learning of mathematics; · Changing roles of calculators and computers in the practice of mathematics. These issues stand out from many others discussed in Everybody Counts once in the Standards in their compelling and inevitable impact on the organization of the mathematics curriculum. Hence they serve as touchstones for our inquiry into a philosophy and framework for school mathematics. The complexity and inertia of the American educational system are too great for any reform to be implemented rapidly, even if it hocl the full and active support of all appropriate constituencies. Fortunately, the process of change is already well under way in many districts. The aim of this Philosophy anc! Framework is to give impetus to local reform and coherence to the nationwide effort. It is intended to complement Everybody Counts and the NCTM Stan clards by encouraging development of a mathematics curriculum that will merit the support of teachers and taxpayers, parents and stuclents. It must be a curriculum for all students that will meet their neecis ancl, therefore, the needs of the society in which they will live,

Next: A Rationale for Change »
Reshaping School Mathematics: A Philosophy and Framework for Curriculum Get This Book
× 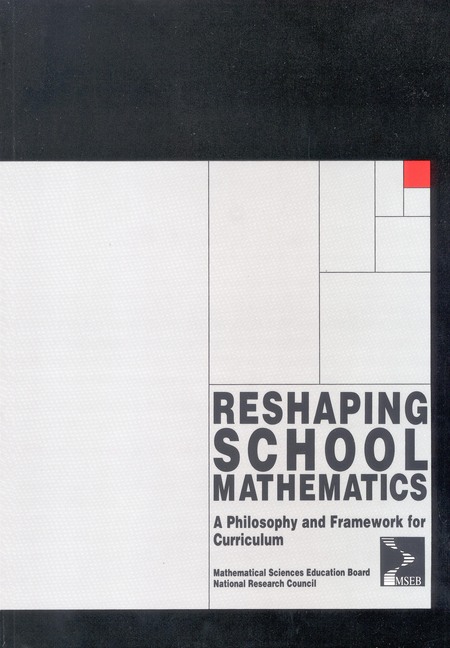 The United States must restructure mathematics education—both what is learned and the way it is taught—if children are to develop the mathematical knowledge and skills they will need to be personally and professionally competent in the twenty-first century. Joining the recent reports that have opened a national dialogue on these issues, Reshaping School Mathematics focuses discussion on essential ideas that transcend details of current curricula or assessment results. It examines changing perspectives on the role of mathematics in society and changing practice in the use of technology—particularly calculators and computers—in mathematics education.