Decline of the Sea Turtles: Causes and Prevention (1990)

Visit NAP.edu/10766 to get more information about this book, to buy it in print, or to download it as a free PDF.
Page i Share Cite
Suggested Citation:"Front Matter." National Research Council. 1990. Decline of the Sea Turtles: Causes and Prevention. Washington, DC: The National Academies Press. doi: 10.17226/1536.
×

DECLINE OF THE SEA TURTLES

Preface The Committee on Sea Turtle Conservation was formed on March 1, 1989, under the auspices of the Board on Environmental Studies and Tox- icology (BEST) and the Board on Biology of the National Research Coun- cil's Commission on Life Sciences. The committee was formally charged as follows: The task of this committee is to perform a study mandated by the Endangered Species Act Amendments of 1988, reviewing scientific and technical information pertaining to the conserva- tion of sea turtles and the causes and significance of turtle mortality, including that caused by commercial trawling. The committee's report will provide information on the population biology, ecology, and behavior of five endangered or threat- ened species: the Kemp's ridley, loggerhead, leatherback, hawksbill, and green sea turtles. The committee will also review information on the effectiveness of current and needed programs to increase turtle populations. The resulting report will be used by the Secretary of Commerce to assess the effec- tiveness of and need for regulations requiring the use of turtle- excluder devices (TEDs) by commercial shrimp-trawlers. . . v''

vial Decline of the Sea Turtles In addition to this final report, the committee was required to prepare an interim report on the status of the Kemp's ridley (see Section 1008 of the Endangered Species Act Amendments of 1988 in Appendix A). The interim report on Kemp's ridley is enclosed as Appendix B. The committee met on May 4-5, June 26-29, September 28-30, and November 16-18, 1989. In addition, a writing group met in Washington, D.C., on December 4-5, 1989. The committee was fortunate to have as members experts on turtle biology, physiology, and conservation, shrimp fishing and gear technolo- gy (in particular, trawl and TED technology), fishery biology and manage- ment, and technology transfer and fishery extension programs. All these kinds of expertise were required to address the complex issues of sea tur- tle conservation. I was especially pleased by the new analyses and syn- theses that the committee was able to make that allowed us to reach a number of important conclusions with more certainty than I originally had expected. To gain further knowledge of TEDs and other gear operations, the committee sailed for a day off the coast of Jekyll Island, Georgia, on the RV/Georgia Bulldog. The trip was made possible through the courtesy of David Harrington. We were assisted greatly by the National Research Council staff, in par- ticular, Dave Johnston, our project director, and Linda Kegley, our project assistant. We also acknowledge the guidance of David Policansky, pro- gram director; James ]. Reisa, director of BEST; and Joanna Burger, our BEST liaison. In addition to those persons, other BEST staff jumped in to help when needed. Bernidean Williams, information specialist, helped to check references. Norman Grossblatt of the Commission on Life Sciences and Lee ' Paulson of BEST edited the report. My personal thanks to them all. We also thank a number of persons who either prepared presentations for the committee or made original data available to the committee for analysis and interpretation. 'Those who provided testimony were Michael Weber (Center for Marine Conservation), Larry Ogren (National Marine Fisheries Service), Earl Possardt (U.S. Fish and Wildlife Service), Charles Oravetz (National Marine Fisheries Service), Tee John Mialjevich (Con- cerned Shrimpers of America), Carol Ruckdeschel (Cumberland Museum), David Harrington (University of Georgia Marine Extension Service), Joe Webster (Commercial Shrimp Fisherman), David Blouin (Department of Experimental Statistics, Louisiana State University), Elizabeth Gardner (leg- islative assistant to Senator Howell Heflin), and David Cottingham (National Marine Fisheries Service). Those who provided data include Wendy Teas, Nancy Thompson, Terry Henwood, Warren Stuntz, Edward F. Klima, Ren Lohoefener, Ernie Snell, James Nance, and Guy Davenport,

ix Decline of the Sea Turtles all with the National Marine Fisheries Service; Alan Bolten (University of Florida); Michael Harris (Georgia Department of Natural Resources); Tom Henson (North Carolina Nongame Endangered Wildlife Program); and Sally Murphy (South Carolina Wildlife and Marine Resources). Without their assistance we would not have been able to make our report current. I wish to thank my own colleagues in the Center for Limnology at the University of Wisconsin-Madison, who assisted with analyses and data transfer: Chris Carr, Barbara I. Benson, Inga Larson, Norma D. Magnuson, Mark D. McKenzie, Mary Rose Lawocki Smith, and Joyce M. Tynan. Assis- tance to other committee members was provided by Nancy Balcom (Vir- ginia Institute of Marine Science), David Rostal (Texas A&M University), and Hal Summerson and Alberto Reyes-Campo (University of North Car- olina, Institute of Marine Sciences). We dedicate this volume to the peaceful coexistence of sea turtles and shrimp fisheries. John J. Magnuson Chairman April 23, 1990

Next: Executive Summary »
Decline of the Sea Turtles: Causes and Prevention Get This Book
× 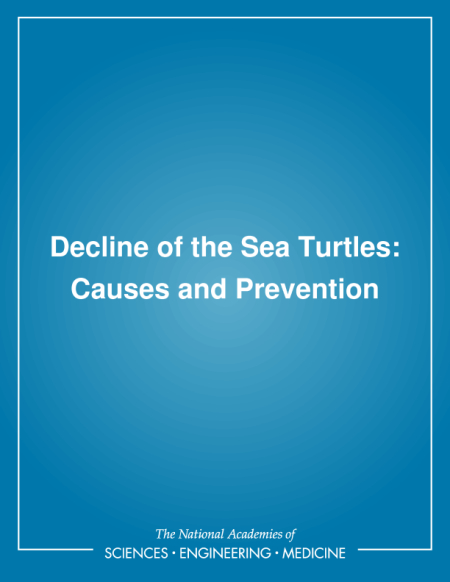 This book explores in detail threats to the world's sea turtle population to provide sound, scientific conclusions on which dangers are greatest and how they can be addressed most effectively. Offering a fascinating and informative overview of five sea turtle species, the volume discusses sea turtles' feeding habits, preferred nesting areas, and migration routes; examines their status in U.S. waters; and cites examples of conservation measures under way and under consideration.