Soviet-American Dialogue in the Social Sciences: Research Workshops on Interdependence Among Nations (1990)

Visit NAP.edu/10766 to get more information about this book, to buy it in print, or to download it as a free PDF.
Page i Share Cite
Suggested Citation:"Front Matter." National Research Council. 1990. Soviet-American Dialogue in the Social Sciences: Research Workshops on Interdependence Among Nations. Washington, DC: The National Academies Press. doi: 10.17226/1556.
×

Acknowledgements The Committee on Contributions of Behavioral and Social Science to the Prevention of Nuclear War is indebted to the Carnegie Corporation of New York and the John D. and Catherine T. MacArthur Foundation for their support of the committee and, through it, of these workshops. We also wish to acknowledge the important role of the committee's parent body, the National Research Council's Commission on Behavioral and Social Sciences and Education and the Council's Office of International Affairs and its Soviet-East European Program. The program's director, Glenn Schweitzer, offered us wise counsel in developing the US-Soviet agreement to conduct these workshops and the program's staff, especially Anna Phillips, offered us continuing support, assistance, and guidance. We would like to express our appreciation to the many Soviet scholars whose understanding and efforts made these workshops possible, and especially to Andrey Kokoshin, Viktor Sergeev, Vladimir Averchev, and Pavel Parshin of the Institute of the USA and Canada of the Academy of Sciences, USSR. Finally, special thanks are due to David ~ Goslin, former executive director of the commission, for his initiative, enthusiasm, and persistence in bringing these workshops into being. v

Next: Introduction »
Soviet-American Dialogue in the Social Sciences: Research Workshops on Interdependence Among Nations Get This Book
× 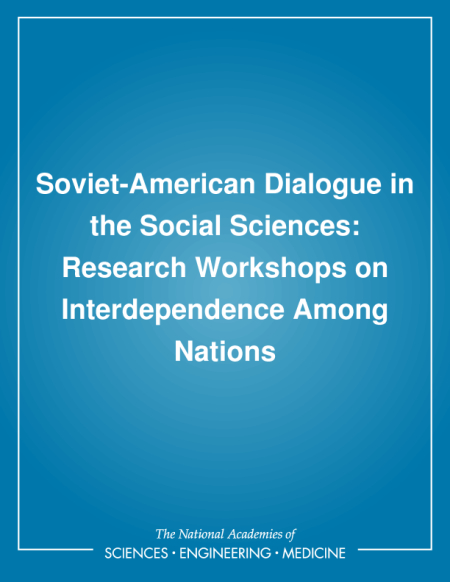