Visit NAP.edu/10766 to get more information about this book, to buy it in print, or to download it as a free PDF.
« Previous: Introduction
Page 3 Share Cite
Suggested Citation:"Theories for Distributed Decision Making." National Research Council. 1990. Distributed Decision Making: Report of a Workshop. Washington, DC: The National Academies Press. doi: 10.17226/1558.
×

DISTRIBUTED DECISION MAKING 3 Thsk analysts can determine the most efficient procedures for accomplish- ing various maintenance functions, but they may miss the effect of shift work on operators' abilities to accomplish their tasks and detect mistakes that they have made. Planners can specify what operators should do in all imaginable contingencies; however, unless they recognize the cognitive dif- ficulties of matching concrete situations to abstract plans (especially under conditions of stress), these planners may create an illusion of predictability for those managing a system while denying needed freedom of action for those actually doing the work. In each of these ways, system analysts need to understand how people will fill the interstices in a system's formal design. Conversely, in order to make themselves most useful, specialists in informal behavior need help in understanding the aggregate impact of various behaviors. For example, they may advocate an open line (or park line) communication system, wherein everyone has access to every message as a way to ensure that distributed decision makers have a shared mental model of the system's overall status. In addition to worrying about the psychological impact of that policy on what information operators will choose to share (knowing that everyone is listeriing), they also need to anticipate the communication system's ability to sustain the load it generates. In order to meet these challenges, efforts are needed on four different levels: 1. developing better theories of distributed decision making; 2. studying empirically issues pertinent to distributed decision mak- ing; generating the research methods needed for studying distributed decision making; and 4. creating the research and development community needed to address distributed decision making and ensure the transfer of research results to practice. Possible directions for each of these tasks are discussed in the sections that follow. The discussion leads to the proposal of research topics drawn from the workshop's deliberations. What are proposed, by and large, are steps for synthesizing a coherent field of inquiry rather than next best steps for advancing existing disciplines. THEORIES FOR DISTRIBUTED DECISION MAKING Here, as elsewhere, it is natural to desire an encompassing theory of the phenomenon under consideration. Given the diversity of distributed decision-making systems and the variety of activities going on in each, however, this may be a misleading objective. No single theory is likely

4 DISTRIBUTED DECISION MAKING to cover all aspects of all situations. Proposing a single theory, or even a flagship theory, risks creating an illusion of understanding and suppressing concerns that do not readily find expression within that theory. An analogy might be the neglect of higher-order cognitive processes in probabilistic risk analyses of operator performance in nuclear power plants (a technique that is much better suited for modeling more mechanistic actions of people and machines)(Reason, in press). Moreover, even with an encompassing theory as an ultimate goal, it might best be reached through a series of converging, piecemeal efforts. Several directions for such efforts are described here. Exploring Alternative Definitions Decision-making responsibility is distributed in almost any human enterprise. Whether it is a Neolithic hunting park or a couple working out of a common checking account or raising children together, people must coordinate their actions. Their techniques for doing so include sharing information, jointly creating contingency plans, and directly communicating instructions. (Some theorists would argue that individuals contain within themselves multiple actors whose actions must be integrated.) Dis~bu ted decision making is a neologism that has been deliberately chosen to capture the cumulative change in the nature of multiperson decision malting that has been wrought through advances in technology. Those advances have increased the distance over which individuals can maintain contact, the speed with which information and instructions can be shared, the amount of information being created and the accompanying in- formational load, the opportunities for monitoring operators' behavior, and the possibilities for automating instructions (e.g., through expert systems, computerized pattern recognition). There does not, however, seem to be agreement on exactly what the new term means. This could be viewed as a barrier to effective and co- ordinated research. However, it could also constitute an opportunity for theoretical research, clarifying the meaning and implications of alterna- tive definitions. I-hat research could consider what can be distributed in distributed decision-making systems (e.g., information used in planning de- cisions, responsibility for making choices, accountability for those choices, the direct impact of actions, opportunities to receive feedback the ability to change course or override plans). It could also consider over what these things are being distributed (e.g., time, space, individuals, units), the se- quencing of the distribution (e.g., sequential, simultaneous), the nature of the distributional network (e.g., hierarchical, horizontal), and the relevance of external factors (e.g., time pressure, interruption of network, noise in transmission, uncertainty of outcomes). These dimensions of distributed decision making could be considered in isolation and in combination. There

DISTRIBUTED DECISION MAKING s decision making could be considered in isolation and in combination. There seems to be great opportunity for creative thinking about these dimensions and considerable reason to resist preemptively deciding that a particular kind of system captures the essence of distributed decision making. Improving the Availability of Existing Theories The choice of dimensions to incorporate in alternative definitions of distributed decision making requires some expectations regarding their importance for organizational functioning. The natural source of such expectations (other than raw intuition) is existing theories regarding vari- ous components of distributed decision-making systems. Thus, theories of perception might suggest factors of systems that affect people's sensitivity to changes in their environment; theories of higher-order cognition might suggest the factors influencing the interpretation of those changes; and economic theories might suggest how operators will convert those interpre- tations into actions, as they try to act both in their own best interests and as agents of the overall organization. No individual or discipline can pretend to have detailed understanding of more than a few of these perspectives. In order to avoid lopsided ap- proaches to the problem, an encompassing perspective is needed. Without it one risks, as suggested earlier, elegant mathematical models of systems operation based on overly simple assumptions about human behavior, as well as designs based on behavioral principles that are sensible locally but have unimagined side effects when embedded in a complete operating system. A minimal approach to breaching these barriers is making the dif- ferent relevant theories generally accessible. Some progress here might be made simply through the sharing of focal papers in each discipline, perhaps accompanied by some exercises for testing comprehension. In practice, though, any discipline is likely to find other disciplines' in-house publications moderately tough going, yielding insight into those disciplines' (unstated) fundamental assumptions only with difficulty. A more attrac- tive enterprise would be a set of commissioned chapters, each explicating the basic perspective and key results of one discipline as they apply to distributed decision making. These might be built on existing handbook chapters created for even more general audiences. The set of volumes being produced by the National Research Council's Committee on Contri- butions of Behavioral and Social Science to the Prevention of Nuclear War (T6tlock et al., 1989, 1990) might be a prototype of such an effort.

6 DISTRIBlITED DEC SION AtAKING Extending the Range of Existing Theones The review process for a set of chapters like that just suggested would have to ensure fidelity to the home discipline, clarity of presentation, and applicability to distributed decision making. Achieving that last goal to any reasonable extent may be a tall order for an expository chapter. As a result, there would also be a place for theoretical analyses exploring the extension of existing theoretical approaches to this new domain. An article by Fischhoff and Johnson (Appendix A) that was circulated to participants prior to the workshop adopted one approach to that goal. It begins by describing briefly the general research paradigm, assumptions, and results of behavioral decision theory (which studies intuitive processes of judgment and decision making with something of an emphasis on when they produce suboptimal performance of the sort that might be amelio- rated by training or decision aids). It then goes on to consider how those behavioral patterns might be affected by various features of distributed decision-making systems (e.g., the number of people involved, the hetero- geneity of their functions, the interruptibility of their communications). Finally, it speculatively extracts possible design implications. (For example: The successful functioning of most organizations depends heavily on their operators' detailed knowledge of the imperfections in their performance. Any change in the system threatens that "local knowledge." As a result, a deliberate change in the system could only be justified if it made enough of a positive difference to outweigh the necessary loss in operators' un- derstanding of the system's quirks. Thus, technological improvements had better be very good if they are not to reduce performance.) In articles submitted to the workshop, Marie-Elizabeth Pate-Cornell (1984, 1986) showed how the methods of probabilistic risk analysis could be used to illuminate certain aspects of system function, such as the re- lationship between reliability and thresholds for action. It could naturally be extended to the effect of reporting structures and protocols on the quality of information transmission and the resulting pattern of errors in performance. An article submitted by Oliver Williamson (1981) suggested the roles of transaction costs and incentive structures on the nature and efficacy of the decisions made within an organization. This perspective might be extended to considering the result of combining subunits having internally coherent, but externally inconsistent incentive structures. Arti- cles submitted by Ralph Disney and Dieter Konig (1985; see also Clarke and Disney, 1985) showed the richness of the models potentially avail- able for characterizing the queuing of messages and actions in a complex organization. These alternatives could be profitably analyzed in terms of their applicability to different types of distributed decision-making systems. Each of the other articles submitted to the workshop (listed in Appendix 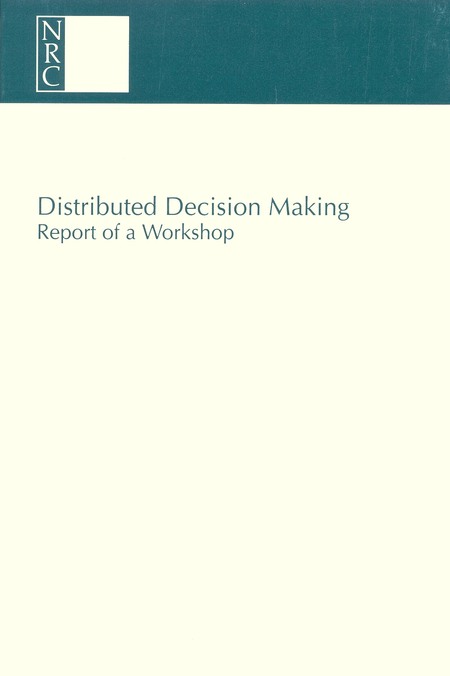