Get This Book
Visit NAP.edu/10766 to get more information about this book, to buy it in print, or to download it as a free PDF.
« Previous: Appendix A: Committee Activities
Page 276 Share Cite
Suggested Citation:"Appendix B: Biographical Sketches." National Research Council. 1991. In the Mind's Eye: Enhancing Human Performance. Washington, DC: The National Academies Press. doi: 10.17226/1580.
×

ROBERT A. BJORK is professor of psychology at the University of California, Los Angeles. He received a B.A. degree in mathematics from the University of Minnesota and a Ph.D. degree in psychology from Stanford University. He has been a visiting scientist at Bell Laboratories, the University of California, San Diego, and the Rockefeller University. His research interests center on human information processing, particularly human memory, and on the practical application of that research to instruction and the optimization of performance. He is the author of numerous publications and has presented lectures and seminars to many groups, including corporate executives, college alumni, educators, lawyers, and physicians, in this country and in Europe. He served as editor of Memory and Cognition from 1981 to 1985 and has been on the editorial boards of several other journals. He is a fellow of the American Psychological Association and of the Society of Experimental Psychologists and is a member of the Psychonomics Society and the Cognitive Science Society.

MICHELENE T.H. CHI is professor of psychology and a senior scientist at the Learning Research and Development Center at the University of Pittsburgh. She received a B.S. degree in mathematics and a Ph.D. degree in psychology, both from Carnegie-Mellon University. Her research foci are understanding changes in knowledge structure as one learns a new domain, and how such restructuring effects the way the acquired knowledge is used. Her work also entails the development of rigorous analyses of talk-aloud protocols as a methodological tool for

uncovering knowledge structures of complex domains. She serves on the editorial boards of Journal of the Learning Sciences, Cognitive Development, and Human Development. She has received the Spencer Fellowship from the National Academy of Education and the Boyd McCandless Young Scientist Award from the American Psychological Association. She is a fellow of the American Psychological Association and has an invitation to be a fellow at the Center for the Advanced Study in the Behavioral Sciences. She has published widely, including a recent edited volume on The Nature of Expertise.

ROBERT W. CHRISTINA is professor and chair of the Department of Physical Therapy and Exercise Science at the State University of New York at Buffalo. Previously, he was at the Pennsylvania State University and the State University of New York, College at Brockport. He earned a B.S. degree at Ithaca College, and M.A. and Ph.D. degrees at the University of Maryland. His research focuses on understanding the processes by which humans control and learn motor skills and on determining the most effective conditions for acquiring, remembering, and performing movement skills. He is the author of numerous scientific and professional publications and currently serves on the editorial boards of the Research Quarterly for Exercise and Sport and Human Performance. He has presented lectures and seminars to the Professional Golfers Associations of America and to many of the national sport governing bodies of the U.S. Olympic Committee, including the U.S. Ski Coaches Association, U.S. equestrian team, U.S.A. Wrestling, U.S. Diving Association, U.S. Rowing Association, and the U.S. shooting team. He coauthored Coaching Young Athletes and Coaches Guide to Teaching Sport Skills. He is past president of the North American Society of the Psychology of Sport and Physical Activity and current president of the American Academy of Physical Education.

JAMES H. DAVIS is professor of psychology at the University of Illinois. He previously was at Miami University and Yale University. He received a B.S. degree from the University of Illinois in psychology and a Ph.D. degree in social psychology from Michigan State University. His research interests center around judgment and decision making by small groups and individuals. He is a fellow of the American Psychological Association and a member of the Psychonomics Society, the American Association for the Advancement of Science, and the Japanese Psychological Association, among others. He was a Lansdowne Fellow at the University of Victoria in 1984 and a fellow at the Center for Advanced Study in the Behavioral Sciences in 1987-1988. He is a member of the editorial boards of a number of journals, including Orga-

nizational Behavior and Human Decision Processes and Behavioral Decision Making. He has presented addresses in both the United States and abroad (England, Germany, China, and Japan) and published numerous articles.

GERALD C. DAVISON is professor of psychology at the University of Southern California and previously was also director of clinical training and department chair. He received an A.B. degree from Harvard University and a Ph.D. degree from Stanford University. His current research is concerned with cognitive assessment, stress, and hypertension. He has published on cognitive behavior therapy and experimental personality research and is coauthor of three books. He is a fellow of the American Psychological Association and the American Psychological Society and has served on the executive committee of the APA's Division of Clinical Psychology, on the Board of Scientific Affairs, and on the Committee on Scientific Awards. He is also past president of the Association for the Advancement of Behavior Therapy. He has served on the editorial board of several journals, including the Journal of Consulting and Clinical Psychology, Behavior Therapy, Cognitive Therapy and Research, and the Journal of Psychotherapy Integration.

DANIEL DRUCKMAN is study director of the Committee on Techniques for the Enhancement of Human Performance, study codirector of the Committee on the Human Dimensions of Global Change, and senior staff officer for the Committee on International Conflict and Cooperation at the National Research Council. He is also an adjunct professor of conflict management at George Mason University and has been a visiting research scholar at the International Institute of Applied Systems Analysis in Vienna, Austria. He was previously the mathtech scientist at Mathematica, Inc., and senior scientist and program manager at Booz, Allen, and Hamilton. He has also been a consultant to the U.S. Foreign Service Institute, the U.S. Arms Control and Disarmament Agency, and the U.S. delegation to the Vienna talks on force reductions. He received a Ph.D. degree in social psychology from Northwestern University and was a winner of the American Institutes for Research's best-in-field award for his dissertation. He is a member of the Society of Experimental Social Psychology and the International Studies Association. His primary research interests are in the areas of conflict resolution and negotiations, nonverbal communication, group processes, and modeling methodologies, including simulation. He has published five books and numerous articles and chapters on these topics. He currently serves on the editorial boards of the Journal of Conflict Resolution and Negotiation Journal.

ERIC EICH is associate professor of psychology at the University of British Columbia. He earned a B.A. degree from the University of Maryland and a Ph.D. degree in cognitive psychology from the University of Toronto. His research is chiefly concerned with matters relating to human memory and amnesia, with special emphasis on the state-dependent effects of drugs, emotions, and environments on learning and remembering. Support for this research has been provided by a University Research Fellowship, awarded by the Natural Sciences and Engineering Research Council of Canada, a Killam Memorial Research Fellowship, and by grants from various American or Canadian agencies. He is a member of the American Psychological Society and currently serves on the editorial board of Memory and Cognition.

RAY HYMAN is professor of psychology at the University of Oregon. He received a Ph.D. degree from the Johns Hopkins University. Previously, he taught at Harvard University, and he has also been a consultant to the General Electric Company, a Fulbright-Hays research scholar (University of Bologna), a National Science Foundation faculty fellow, and a visiting professor of psychology at Stanford University. He serves on the editorial board of The Skeptical Inquirer and is an associate editor of the Zetetic Scholar. His numerous publications include several books, encyclopedia chapters, and technical articles in such journals as Proceedings of the IEEE and the Journal of Parapsychology and articles on topics related to parapsychology that have appeared in both parapsychological and other journals.

for national sport governing bodies as well as membership on the visual performance and enhancement and sport psychology committees of the U.S. Olympic Committee. He was the cofounder and editor of the Journal of Sport and Exercise Psychology and has also edited or authored seven books and many journal articles.

FRANCIS J. PIROZZOLO is chief of the neuropsychology service and associate professor in the Department of Neurology at Baylor College of Medicine. He received a B.A. degree from Wilmington College in psychology, an M.A. degree from the University of Chicago, and a Ph.D. degree from the University of Rochester in neuropsychology and learning. His professional interests fall into two categories: one is neuropsychology, in which his research and clinical activities focus on assessment and treatment of age-related neurodegenerative disorders, such as Alzheimer's and Parkinson's diseases; the second is human performance, in which his research and clinical practice centers around understanding the biochemical basis of behavior in sports with elite athletes. He is the editor-in-chief of Developmental Neuropsychology; is on the boards of several journals, including Brain and Cognition, Neurology of Aging, and the International Journal of Clinical Neuropsychology; and is a contributing editor for Sports Strategy and Performance Report. He is a member of the National Research Council of Italy's task force on memory disorders in the aged and an advisory council member of the Sports Psychology Institute. In addition to writing several books, he has published in a variety of journals such as Neurology, Brain and Language, and Science. He received the Phillip Rennick Award for excellence in neuropsychological research from the International Neuropsychological Society in 1977.

LYMAN W. PORTER is professor of management and psychology in the Graduate School of Management at the University of California, Irvine. He was formerly dean of the Graduate School of Management there and on the faculty of the University of California, Berkeley. His major fields of interest are organizational psychology and management. He received a B.A. degree from Northwestern University and a Ph.D. degree in psychology from Yale University. He is past president of the Academy of Management and in 1983 received that organization's award for scholarly contributions to management. He also served as president of the Division of Industrial-Organizational Psychology of the American Psychological Association. He is the author and coauthor of six books and many articles in these fields.

Next: Index »
In the Mind's Eye: Enhancing Human Performance Get This Book
× 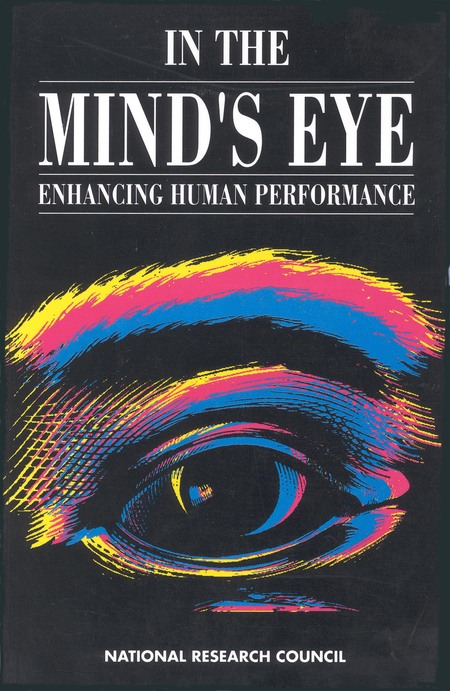 The archer stands and pulls back the bow, visualizing the path of the arrow to the target. Does this mental exercise enhance performance? Can we all use such techniques to improve performance in our daily lives?

In the Mind's Eye addresses these and other intriguing questions. This volume considers basic issues of performance, exploring how techniques for quick learning affect long-term retention, whether an expert's behavior can serve as a model for beginners, if team performance is the sum of individual members' performances, and whether subliminal learning has a basis in science.

The book also considers meditation and some other pain control techniques. Deceit and the ability to detect deception are explored in detail. In the area of self-assessment techniques for career development, the volume evaluates the widely used Myers-Briggs Type Indicator.