Visit NAP.edu/10766 to get more information about this book, to buy it in print, or to download it as a free PDF.
« Previous: Introduction
Page 13 Share Cite
Suggested Citation:"1. Reducing Uncertainties." National Research Council. 1990. The U.S. Global Change Research Program: An Assessment of the FY 1991 Plans. Washington, DC: The National Academies Press. doi: 10.17226/1606.
×

1 Reducing Uncertainties Does the Program Address the Scientific Priorities for Reducing Un certair~ies about Global Environmental Change? Based on our review, we conclude that the interagency USGCRP, as described in the President's FY 1991 budget, defines an appropriate first step toward a sound national program to reduce the scientific uncertainties associated with global change issues. The program is clearly aimed at advancing our understanding of the earth system. If successfully pursued it should improve our ability to identify trends and anticipate effects of many of the environmental changes that are currently perceived as likely to be of greatest consequence over the next 10 to 100 years. The focus of the program with greatest initial emphasis given, in order of priority, to climate and hydrologic systems, biogeochemistry, eco- logical systems, earth system history, and the human dimensions of global change with somewhat lesser emphasis on solid earth processes and solar lIlnUeIICeS IS in our view appropriate to achieve its stated goals. in making a heavy initial investment in a space-based observational system, the pro- gram lays the foundation for obtaining sustained, long-term measurements of certain of the vital signs of the earth; it also initiates a modern data and information system (EOSDIS) that will make the data readily available to those who need them. Scientific priorities for reducing uncertainties about global change have been developed by the NRC and other bodies in a series of studies 13

14 over the past seven years. Documents of those efforts include the report of the NASA Earth System Science Committee (`Ea~th System Science: A Program for Global Change, 1988~; reports of the National Research Council that have recommended and defined a global change program (Global Change in the Geosphere-Biosphere, 1986; Toward an Understanding of Global Change, 1988~; a Space Science Board report (The ~enty- First Century: Mission to Planet Earth, 1988~; and international planning documents for the International Geosphere-Biosphere Program and World Climate Research Program. These documents underscore that if changes in the global environment are to be understood and predicted, knowledge of how the earth works as a system must be expanded, with particular emphasis on the connections that link climate, biogeochemistry, ecological systems, human aspects of change, and the development of earth system models that will allow improved predictions. The reports also recommend that certain priority parameters of the earth system be under extensive, long-term surveillance, and that the results of monitoring be made freely available both nationally and internationally. The USGCRP has been designed by the CEES to follow these guidelines, and it is clearly coincident with the recommendations from the scientific community. While the scientific priorities identified in the FY 1991 plan seem appropriate, given current knowledge, it is necessary that the plans be kept flexible and are under continual review as the program evolves. The USGCRP does now and must continue to address issues broader than climate and deeper than the sometimes ephemeral concerns that readily attract public attention. The broader issues potentially include changes in the chemistry and quality of not only the atmosphere but also the soils and surface and subsurface waters and the oceans themselves; reductions in biodiversity from deforestation and other land use practices; and other responses of the earth system to extensive agriculture, industry, urbaniza- tion, land use alterations, the spread of anthropogenic pollutants, and other changes induced by humans. Some of these problems are addressed by the FY 1991 plan; others, such as reductions in biodiversity and the human causes and responses to change (e.g., impacts on agricultural systems and public health) are addressed inadequately or not at all. Today public and policy concern is riveted on anticipated greenhouse warming, with added concern regarding the depletion of stratospheric ozone, acid precipitation, and tropical deforestation. Continued stress on the environment, driven by a burgeoning world population, will expose new and perhaps unexpected concerns that may prove as significant if not more so-than any of these. The usefulness of the USGCRP will rest ultimately on its ability to shift focus, as needed, to apply the energies of an organized research community to new and unanticipated concerns about the global environment, and to distinguish long-term significant issues from

15 those that are ephemeral. The program can best achieve this by holding to its original goal of understanding the earth as a system including the role of humans as well as the natural variability of the system and by documenting significant trends in global change, without any prescience of what these changes will be or any prejudice as to where or how they will emerge. The program must therefore be ready to add or drop priorities as scientific insights develop. It must also exert particular prudence in the selection of instruments and parameters that are to be monitored from space, where costs and long lead times have the most limiting effects. PRINCIPAL RECOMMENDATIONS The panel endorses the general scientific priorities of the USGCRP and urges that they be kept flexible in ensuing years. ~ maintain the required program flexibility and to ensure its appropriate direction, we urge that the USGCRP be reviewed at frequent intervals by scientists who are sufficiently detached from the agencies that implement the program to render impartial judgements.

Next: 2. Appropriate Balance »
The U.S. Global Change Research Program: An Assessment of the FY 1991 Plans Get This Book
× 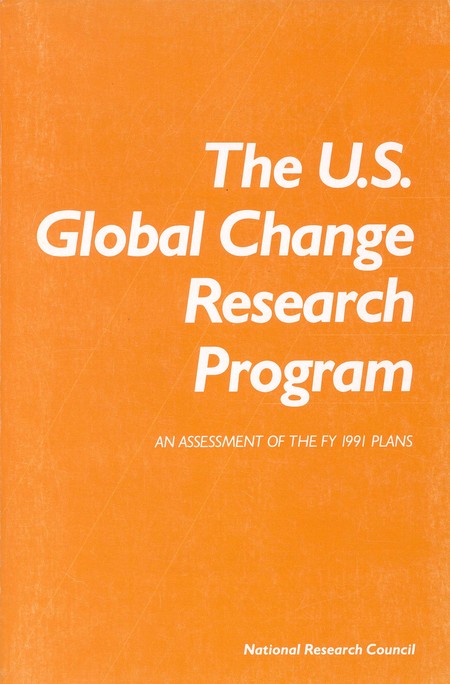