Get This Book
Visit NAP.edu/10766 to get more information about this book, to buy it in print, or to download it as a free PDF.
Page i Share Cite
Suggested Citation:"Front Matter." Institute of Medicine. 1991. Seafood Safety. Washington, DC: The National Academies Press. doi: 10.17226/1612.
×

Committee on Evaluation of the Safety of Fishery Products

Food and Nutrition Board

The Institute of Medicine was chartered in 1970 by the National Academy of Sciences to enlist distinguished members of the appropriate professions in the examination of policy matters pertaining to the health of the public. In this, the Institute acts under both the Academy’s 1863 congressional charter responsibility to be an adviser to the federal government and its own initiative in identifying issues of medical care, research, and education. Dr. Samuel O. Thier is president of the Institute of Medicine.

This study was supported by contract no. 50-WCNF-8-060636 from the U.S. Department of Commerce, National Oceanic and Atmospheric Administration.

Seafood safety / Committee on Evaluation of the Safety of Fishery Products, Food and Nutrition Board, Institute of Medicine, National Academy of Sciences : Farid E. Ahmed, editor.

No part of this book may be reproduced by any mechanical, photographic, or electronic process, or in the form of a phonographic recording, nor may it be stored in a retrieval system, transmitted, or otherwise copied for public or private use, without written permission from the publisher, except for the purposes of official use by the U.S. Government.

The serpent has been a symbol of long life, healing, and knowledge among almost all cultures and religions since the beginning of recorded history. The image adopted as a logotype by the Institute of Medicine is based on a relief carving from ancient Greece, now held by the Staatlichemuseen in Berlin.

COMMITTEE ON EVALUATION OF THE SAFETY OF FISHERY PRODUCTS

Food and Nutrition Board

FOOD AND NUTRITION BOARD

The responsibility for monitoring and control of seafood safety is divided among various agencies of the federal government, primarily the Food and Drug Administration (FDA), the Environmental Protection Agency (EPA), the National Marine Fisheries Service (NMFS), and the states. In recent years, however, the effectiveness of their respective programs has been questioned.

As a result of negative public perceptions, studies, and surveys conducted by various groups interested in seafood safety, Congress appropriated funds in 1988 to the National Oceanic and Atmospheric Administration (NOAA) of the Department of Commerce (DOC). These resources were dedicated to a two-year study to design a program of certification and seafood surveillance consistent with the Hazard Analysis Critical Control Point (HACCP) program, a concept recommended in 1985 and 1987 by Food and Nutrition Board (FNB) committees for the inspection of meat and poultry. The National Marine Fisheries Service of NOAA then approached the Institute of Medicine (IOM) Food and Nutrition Board with a formal solicitation for a two-year study to be conducted as part of the agency's overall plan.

In response, a multidisciplinary committee of 13 scientists was convened under the auspices of the FNB to conduct the study. The committee consisted of experts in the fields of public health, marine pathology, marine toxicology, food science and technology, food microbiology, biostatistics, seafood safety policy and regulations, epidemiology, risk assessment, industry structure, and public interest. In addition, the committee had four consultants in the areas of trace-metal safety, environmental chemical contaminants, marine resources, and comparative risk assessment. The committee was divided into the following working groups to address contract tasks: (1) regulatory/legislative, (2) microbiology/parasitology, (3) natural toxins, (4) chemical residues/risk assessment, and (5) seafood consumption/industry structure. The committee was asked to evaluate the health effects of marine and freshwater fishery products (fresh or frozen) available to the consumer from commercial and recreational sources, and to identify options for improvement of the current system of seafood surveillance and control. The evaluation was to include an examination of the potential

health hazards ascribed to chemical, microbial, and parasitic contaminants of seafood (e.g., natural toxins, toxic metals, synthetic substances, microorganisms, and parasites). Existing programs conducted under the authority of federal, state, or local governments, other public bodies, and private organizations were to be evaluated to ensure the safety of seafood obtained from domestic and foreign sources. The charge to the committee was divided into nine tasks:

The tasks addressed by the committee are detailed in the various chapters and in its Executive Summary.

During the two-year duration of the study, the committee met nine times: five times the first year and four times the second year. The committee hosted a public meeting, which was part of its first meeting on January 31, 1989, to provide an opportunity for interested individuals and groups to express views or to present information to the committee for consideration. Eight speakers representing consumer groups, environmental and conservation foundations, trade organizations, and international and scientific organizations gave presentations. Some of these groups also provided the committee with additional data and information for consideration in carrying out its task.

The regulatory working group held group meetings and individual interviews with federal regulatory agencies, a variety of coastal state agencies, and industry representatives involved in seafood inspection and monitoring. Meetings with respective state regulatory representatives were conducted in Massachusetts, California, Hawaii, and the state of Washington. Additional state regulatory representation was ensured through numerous meetings and conversations with individuals from Arkansas, Wisconsin, Connecticut, Rhode Island, New York, and Guam. Results from meetings in Texas, Louisiana, Massachusetts, Alabama, Florida, Georgia, South Carolina, North Carolina, and Puerto Rico were referenced from project work conducted in conjunction with the Southeastern Fisheries Association, Tallahassee, Florida. This endeavor was directed toward assessing the intermingling roles of the federal and state governments in seafood regulation.

In addition to its meetings, the committee also visited several seafood processing plants in various regions of the country *Seattle, Washington; Houma, Louisiana; and Hampton, Virginia) to observe food safety issues related to production, preparation, and processing methodologies employed in the seafood industry.

The committee held a workshop in the third quarter of the study on July 26, 1989, focusing on assessing and controlling health hazards from fishery products. Seven invited speakers gave presentations, and four guests from academia and government agencies participated in the discussion.

A summary of the committee's findings, conclusions, and recommendations appears in Chapter 1. Chapter 2 describes the demographics of the seafood industry, fishery resources, aquaculture, and consumption trends. It also elaborates on activities in other countries. Chapters 3 and 4 outline health effects due to microbiological and parasitic infections and to exposure to natural toxins. Chapter 5 details the risks from exposure to environmental chemicals in aquatic organisms. Chapter 6 critiques existing risk assessment practices and suggests recommendations for improvement. Statistical sampling methods used in control of seafood hazards and suggestions for improvement are outlined in Chapter 7. Federal, state, and international programs with impact on seafood are described in Chapter 8, as well as causes of illness in targeted states, and comparative risks for consumers from different seafood products. A glossary of terms and acronyms is presented in Appendix A. The affiliation and major research interests of committee members and staff may be found in Appendix B.

Moreover, the committee commends the assistance, hard work, and support of FNB staff: Farid E. Ahmed for the organizational and administrative support of the committee's work, and for editing the report; Barbara Matos for typing and finalizing the documents; Robert Earl for finalizing some chapters; and Catherine Woteki, Enriqueta Bond, and Samuel Thier for their support of the committee's work. Florence Poillon and Sally Stanfield are to be commended for final manuscript editing and report preparation, and Francesca Moghari for designing the cover to the report.

The Chair also wishes to thank the committee and its consultants, who volunteered countless hours and effort to produce an objective and timely report on a controversial subject that is a small part of a major national issue, the safety of the food supply.

Committee on Evaluation of Safety of Fishery Products

Next: 1. Executive Summary »
Seafood Safety Get This Book
× 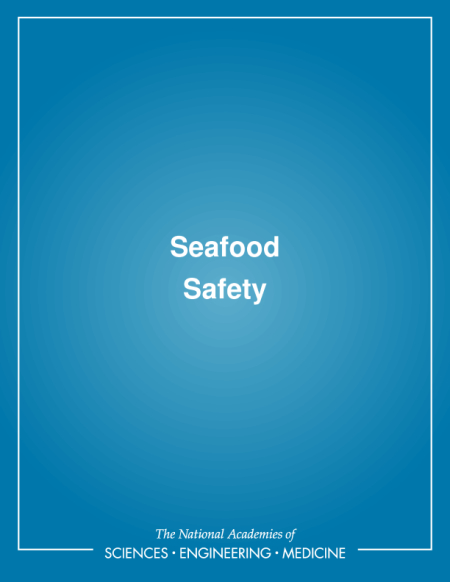 Can Americans continue to add more seafood to their diets without fear of illness or even death? Seafood-caused health problems are not widespread, but consumers are at risk from seafood-borne microbes and toxins—with consequences that can range from mild enteritis to fatal illness.

At a time when legislators and consumer groups are seeking a sound regulatory approach, Seafood Safety presents a comprehensive set of practical recommendations for ensuring the safety of the seafood supply.

This volume presents the first-ever overview of the field, covering seafood consumption patterns, where and how seafood contamination occurs, and the effectiveness of regulation.

A wealth of technical information is presented on the sources of contamination—microbes, natural toxins, and chemical pollutants—and their effects on human health. The volume evaluates methods used for risk assessment and inspection sampling.