Visit NAP.edu/10766 to get more information about this book, to buy it in print, or to download it as a free PDF.
Page i Share Cite
Suggested Citation:"Front Matter." National Research Council. 1982. United States-Canadian Tables of Feed Composition: Nutritional Data for United States and Canadian Feeds, Third Revision. Washington, DC: The National Academies Press. doi: 10.17226/1713.
×

PREFACE iii PREFACE This report is the third revision of the joint United States-Canadian Tables of Feed Composition, NAS-NRC publication 659, issued in 1959. The first revision, publication 1232 (1964), consolidated the data in the first joint report with selected data from NAS-NRC publication 449 and NAS-NRC publication 585. The second revision was NAS-NRC publication 1684 (1969). The feeds included here were selected by the Subcommittee on Feed Composition and approved by the Committee on Animal Nutrition and its subcommittees on nutrient requirements of domestic animals. This report brings together analytical data on more than 600 feeds. Data are presented on 68 attributes (nutrients). The report provides working tables for feed manufacturers, nutritional research scientists, teachers, students, county agents, and farmers to use as adjuncts to reports in the NRC nutrient requirement series. This study was partly supported by financial assistance to Utah State University from the U.S. Department of Agriculture (USDA) and from the Agricultural Experiment Station, Utah State University. Support for subcommittee activities was received from Agricultural Research, Science and Education Administration, USDA; the Bureau of Veterinary Medicine, Food and Drug Administration, U.S. Department of Health and Human Services; and Agriculture Canada, Ottawa, Ontario. The subcommittee wishes to thank the many scientists in commercial and university laboratories who supplied data that have been used in compiling the information contained in this report. We are grateful to the Technical Committee of the USDA Cooperative Regional Project S-45 for providing data on a number of forages grown in the southeastern section of the United States. Special thanks are due L.C.Kearl, P.V.Fonnesbeck, and Howard Lloyd of the International Feedstuffs Institute, Utah State University, for their untiring efforts and special competencies in compiling and organizing the data. We are indebted to Philip Ross and Selma P.Baron of the Board on Agriculture and Renewable Resources for their assistance in the production of this report and to the members of the Committee on Animal Nutrition for their critical reviews and suggestions. We want to extend our special thanks to Donald L.Bath, Carl E.Coppock, Eugene S.Erwin, Steve Leeson, Fredric N. Owens, John V.Shutze, Milton L.Sunde, and Eric W. Swanson who reviewed the draft of the report and made helpful comments and suggestions for our consideration. The report was also reviewed by Bernard S.Schweigert for the Board on Agriculture and Renewable Resources and by Howard S.Teague for the Commission on Natural Resources. SUBCOMMITTEE ON FEED COMPOSITION JOSEPH H.CONRAD, Chairman, University of Florida CHARLES W.DEYOE, Kansas State University LORIN E.HARRIS, Utah State University PAUL W.MOE, USDA, Beltsville, Maryland RODNEY L.PRESTON, Texas Tech University PETER J.VAN SOEST, Cornell University 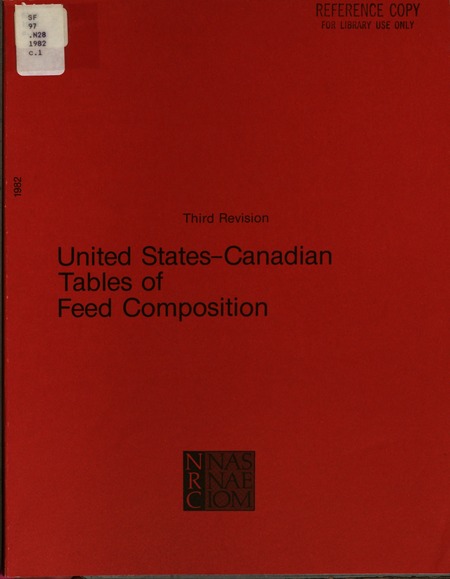