Instantaneous peak discharges for Niu, Hahaione, Inoaole, Kuliouou, Makawao, and Maunawili streams were calculated by the U.S. Geological Survey and are summarized in Table 6 (R. Nakahara, U.S. Geological Survey, Honolulu, personal communication, 1988). Only the Makawao Stream has a continuous recording streamgauge (no. 2540). The Inoaole, Kuliouou, and Maunawili streams have a crest-measuring stake from which instantaneous peaks are calculated using a slope-area method (R. Nakahara, personal communication, 1988).

The data from the Makawao stream, the only continuous recording streamgauge and the only hydrograph resulting from this storm, are presented in Table 7 and plotted in Figure 11. Note that the instantaneous peak discharge of 3,100 cfs occurred at 10:45 p.m. A comparison of the December 31, 1987 streamflows with historical events for the Makawao stream is presented in Table 8.

Some streamgauge stations have questionable rating curves due to streambed variability during storms and backwater effects from the ocean. Such is the case for

To understand the cause of flooding in the Kailua area, it is important to understand the dynamic processes of the events that took place during the storm in the Kawainui Marsh area. Adjacent to the Coconut Grove area in Kailua, the Kawainui Marsh drains 11.2 square miles on the windward side of the Koolau Mountains (U.S. Army Corps of Engineers, 1956). Outflow from the marsh discharges into the man-made Oneawa Canal (also known as Kawainui Canal) and then into the northern end of Kailua Bay. On New Year's Eve water overflowed the Kawainui marsh levee and flooded more

Figure 11 Hydrograph of the New Year's flood recorded at Makawao Strewn (station no. 2540).

TABLE 8 Summary of Significant Historical Discharges at Makawao Stream (Streamgauge No. 2540) for the Period 1958 to 1987.

Figure 12 Gumbel Type I frequency distribution of an annual maximum instantaneous streamflow for Kuliouou Stream (station no. 2479). Period of record is 1970 through 1986.

Figure 13 Gumbel Type I frequency distribution of an annual maximum instantaneous streamflow for Inoaole Stream (station no. 2488) for period of record 1958 through 1986.

Figure 14 Gumbel Type I frequency distribution of an annual maximum instantaneous streamflow for Waimanalo Stream (station no. 2490) for period of record 1963 through 1986.

than 300 homes in the immediate downstream Coconut Grove area, which is located between the marsh and the ocean. It is believed that sometime between 11 p.m. and midnight floodwaters began overflowing the compacted earth-fill levee that protects the Coconut Grove residential area. Three-fourths of the 6,850 foot-long levee was overtopped during the night (U.S. Army Corps of Engineers, 1988e). However, residents confirmed that the Oneawa Canal did not overflow and that no signs of blockage occurred at the bridges along the drainage canal.

The flooding of the Kawainui Marsh and the Coconut Grove area to the east of the Kawainui Marsh on New Year's Eve resulted from a complicated overland flow event in the upstream watershed, the hydraulic routing process of the 740-acre marsh, and an overtopping of the levee. A detailed engineering analysis of the dynamic processes of the marsh under flooding conditions is required to determine the modifications needed to prevent a recurrence of the floods. Such an analysis is beyond the scope of this report.

According to a U.S. Army Corps of Engineers (1956) design memorandum, the

Figure 15 Gumbel Type I frequency distribution of an annual maximum instantaneous streamflow for Makawao Stream (station no. 2540) for period of record 1958 through 1986.

Research and detailed engineering analysis are not the primary objective of this postdisaster study team's mission. Therefore, certain important parameters—such as the time history of sedimentation and debris flow deposition in the Kawainui Marsh since its original construction in 1966, inflow retardation due to floating vegetal mat in the marsh, and backwater and tidal effects on the Oneawa drainage channel—were not investigated. Any of these factors could have contributed to the flooding in the Coconut Grove area in Kailua.

Figure 16 Gumbel Type I frequency distribution of an annual maximum instantaneous streamflow for Maunawili Stream (station no. 2065) for period of record 1958 through 1986.

SEDIMENT, DEBRIS, AND LANDSLIDES FROM THE STORM

Aerial photographs taken during postdisaster reconnaissance indicate that the upper watersheds of the three valleys (Niu, Kuliouou, and Hahaione) on southeastern Oahu provided an excellent environment for the growth of trees and vegetation (G. Kekuna, Oahu Civil Defense Agency, personal communication, 1988). Floodways in the upper valleys had an accumulation of dead trees or debris from prior floods, as seen in Figures 17a–e. The intermittent streamflows of Niu, Kuliouou, and Hahaione streams, coupled with local rainfall, support a significant density of trees and vegetation. Small valleys such as these can be a source of debris that clogs downstream channels, with disastrous results during large floods.

During the torrential rains of New Year's Eve 1987, numerous debris flows occurred. Some of them developed when trees and vegetation were eroded and transported downstream. As floodwaters scoured and widened the natural channels, the eroded materials were transformed into debris flows. Other flows originated as 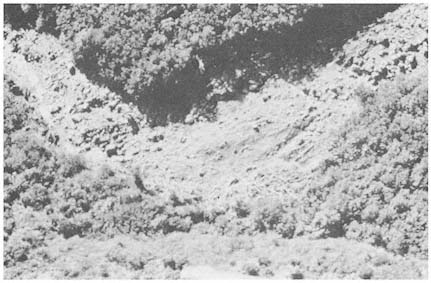 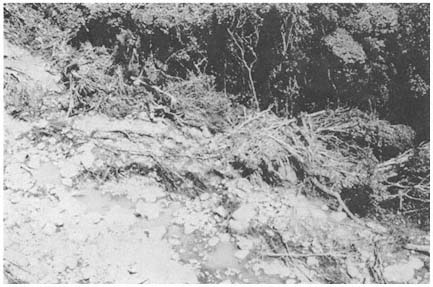 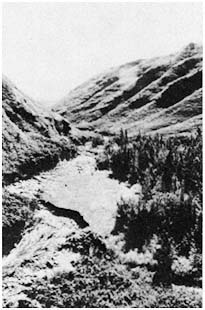 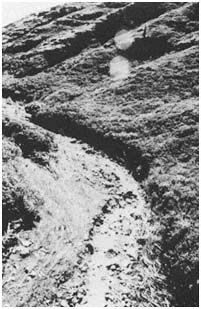 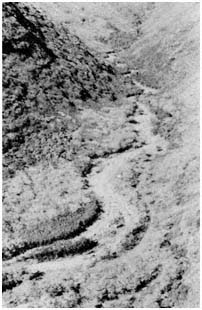 slope failures but were transformed immediately into debris flows by the torrential rains, transporting sediment and rock fragments large distances downstream. Several debris flows in the Hahaione Valley were of this type.

In Niu Valley the debris plugged the underpass of a bridge on Halemaumau Street and flooded lower Niu Valley (Figures 18a and b). In Kuliouou Valley the debris completely sealed off the debris basin (Figures 19a and b) and forced the water to change its course. In Hahaione Valley the culvert immediately downstream from the debris basin clogged and overflowed. The floodwaters then changed their course and flowed down through Kahena Street. The turbulence of the flood gouged a channel 10 to 20 feet deep along Kahena Street and carried asphalt and cars to the bottom of the street (Figures 20a–c).

It is apparent that the debris flows generated by the torrential New Year's Eve rainfall were the major cause of damage in the three valleys. Therefore, a method of determining the quantities of debris flow that might be generated by severe storms should be an essential factor in the development of a hazard-mitigation program. This would greatly improve the planning and design criteria for debris basins and other flood containment structures.

The design procedures that have evolved for the storm drainage facilities in the city and county of Honolulu are presented in a sequence of three reports entitled Storm Drainage Standards published in 1957, 1979, and 1986 (City and County of Honolulu, Department of Public Works, 1957, 1969, 1986). The storm drainage facilities for southeastern Oahu were designed using the criteria presented in these reports.

In its introduction the 1957 report cites "the need and demand for adequate drainage facilities to protect property against storm waters." The report also states that the "city has a responsibility of protecting properties against flooding conditions" and calls for the adoption of a "Master Plan for Drainage'' to be prepared by the city's planning commission. The recommended design criteria in the 1957 Storm Drainage Standards report call for a recurrence interval (frequency or return period) varying from 10 to 50 years, as shown in Table 9.

The recommended design criteria in the March 1969 Storm Drainage Standards report are shown in Table 10. Comparison of Tables 9 and 10 indicates that any area of 100 acres or less that contributes to a highway culvert or bridge is required to be 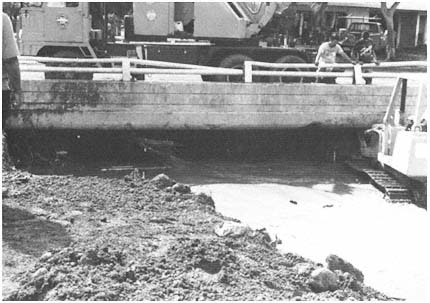 Figure 18a Bridge over east fork of Niu stream at Halemaumau Street. 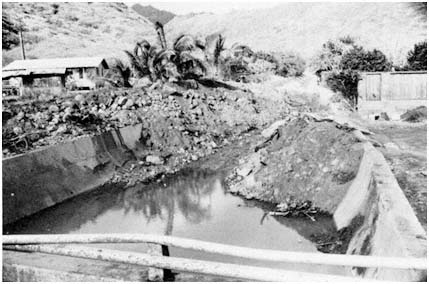 Figure 18b View of east fork of Niu stream above Halemaumau street. 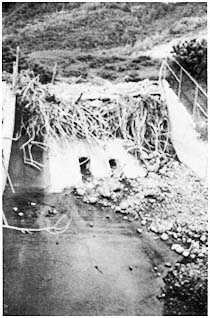 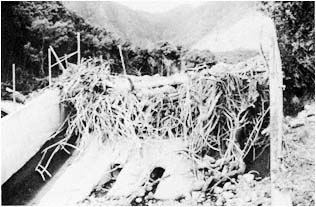 Figures 19a and b This debris basin on Kuliouou Stream (photo taken 1/8/88) was completely sealed off by storm debris. 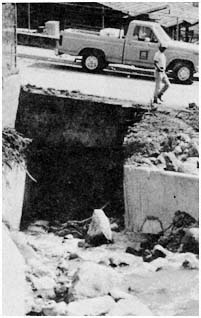 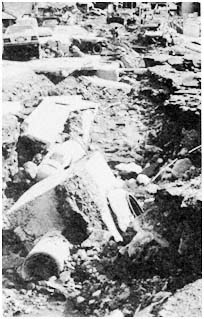 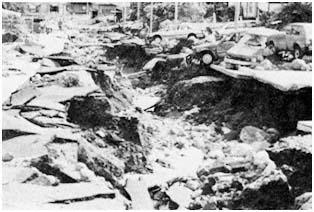 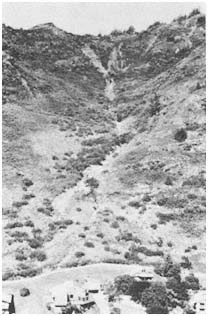 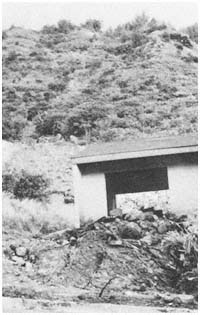 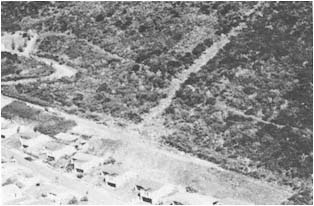 Figures 21a–c Landslides in Hahaione Valley and the Kuliouou Valley. 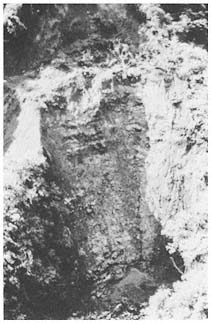 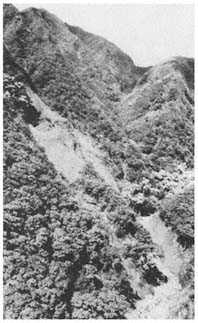 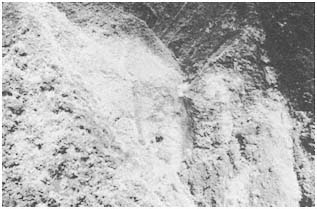 designed using a 50-year recurrence interval. Furthermore, all other areas greater than 100 acres and all streams are required to use a recurrence interval based on maximum recorded flood peaks. When compared with the 1957 report, these changes are significant.

The recommended design criteria in the March 1986 Storm Drainage Standards report are shown in Table 11. The major difference from previous years is the

requirement of using a recurrence interval of 100 years for drainage areas greater than 100 acres.

The most striking aspect of these reports is the lack of any discussion of sediment and debris, which can quickly clog and render inoperative the most carefully designed storm drainage system. Only in the March 1986 report is there the brief statement that ''debris barriers should be provided upstream of the intake to prevent clogging. Where required, boulder basins shall be provided upstream of the debris barrier" (p. 12). However, other than referring to a 1949 U.S. Soil Conservation Service report and to a U.S. Bureau of Reclamation engineering monograph (no date given), no design criteria are given. Therefore, all of the designs by the city and county of Honolulu's Division of Engineering are based only on clear water flows (A. Thiede, Department of Public Works, Honolulu, personal communication, 1988). That is, no consideration is given to the possibility that the flows in the storm drainage channels may carry sediment and debris that add bulk to the flow, increase its volume, and can potentially block artificial and natural stream channels. 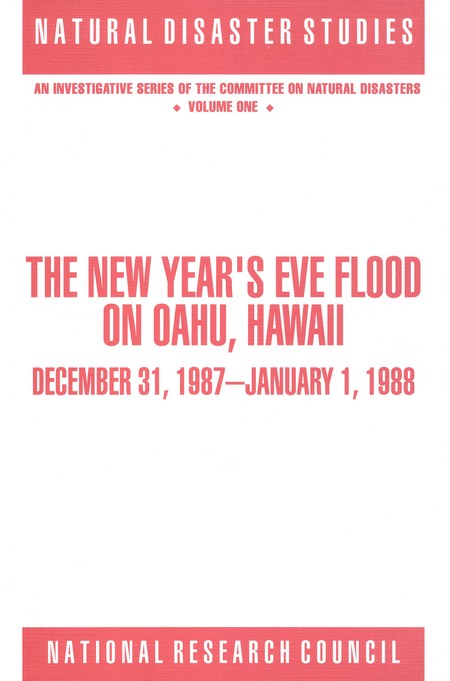