WILLIAM L. EVERITT 1 900-1 986 BY EDWARD C. JORDAN AND GEORGE W. SWENSON, JR. WILLIAM L. EvER~TT, dean emeritus of the College of Engineering, University of Illinois at Urbana-Champaign, died on September 6, 1986. His was a truly illustrious ca- reer as scientist-engineer and engineering educator, with a worldwide reputation as a leader in the field of electronics and communication engineering. Through his writing, particularly his textbook Communication Engineering, he profoundly influ- enced several generations of electrical engineers and laid the groundwork for many of the developments in telecom- munications of the past half-century. His pioneering efforts were instrumental in expanding from a field dealing almost solely with electric power to one encompassing communi- cation and electronics and all their extensions into the modern aspects of the field. Because of his leaclership in engineering education, this transformation, accomplished successfully at his own institutions, hastened the process of change throughout the nation. He was born April 14, 1900, in Baltimore, Maryland, and pursued his early academic career at Cornell (E.E., 1922) and the University of Michigan (M.S., ~ 926), while serving as an instructor of electrical engineering at both institutions. Between the times he was at the universities, he spent two years as an engineer at North Electric Manufacturing Company in charge of automatic PBX development. He also spent 81

82 MEMORIAL TRIBUTES five summers with AT&T in the Department of Develop- ment and Research. With his background of real-worId engineering experience, he began a remarkably productive eighteen-year career at the Ohio State University (OSU). It was at OSU that he developed the principle of the radio altimeter, which is now used as standard equipment on all the larger aircraft. Here also he developed the theory of Class C amplifiers (the main subject of his Ph.D. thesis) as well as Class B amplifiers and introduced the concept of piecewise linear analysis of large-signal electronic circuits. He also developed the systematic design of networks to couple transmitters to antennas (including the almost uni- versally used pi network), and, of course, antennas. The results of this work had immediate applicability and were transmitted directly to the practicing engineer through the medium of the first Broadcast Engineering Conference, which he organized at OSU in 1939. The book Communication Engineering brought graduate students from all over the world to the Ohio State Univer- sity and the University of Illinois. This text, first written in 1932, has gone through three editions, and there have been several foreign translations including an early pirated Japanese edition. The book was a standard source in communication engineering for more than thirty-five years. It was really the first textbook to use the modern approach of incorpo- rating recent research results in a form suitable for classroom presentation. During World War IT, Dr. Everitt was called to Washing- ton to serve as director of the operational research staff, Office of the Chief Signal Officer, U.S. Army. For this work, he was awarded the War Department's Exceptionally Meritorious Civilian Award. After the war, he became heacI of the Department of Electrical Engineering at the University of Illinois, and in 1949 was named dean of the College of Engineering. At Illinois, Everitt recruited an outstanding faculty and developed a strong research program that pro- pelled the department and college to the front ranks of

WILLIAM L. EVERITT 83 engineering education. His leadership as an educator is evidenced by the fact that he has held nearly every major office in the key professional and engineering education societies. He has been president of the Institute of Radio Engineers, the American Society for Engineering Education, and the Engineers Council for Professional Development. He has also been awarded major medals or awards by these and other professional societies. As was typical of Dr. Everitt's efforts to keep up with the technical advances of his field, he undertook the editorship of the Prentice-Hall series of Electrical Engineering texts. In this capacity, he edited more than one hundred textbooks, ranging from basic electrical engineering through information theory, to the physics of microwave propagation. After "retirement" as dean in 196S, he vigorously pursued his professional activities, serving for five years as the very active chairman of the Committee on Telecommunications of the National Academy of Engineering (of which he was founding member), and more recently as chairman and member of the Support Pane] of the Office of Telecommu- nications of the Department of Commerce. Under his chairmanship, several significant reports, such as Communications Technology for Urban Improvement, Telecommunications Research in the United States and Selected Foreign Countries, and The Ap- plication of Social and Economic Values to Spectrum Management were issued. c, . . Throughout his career, Everitt gave selflessly in service to his fellow man through contributions at the community, state, and national levels. He has a lifetime record of service to his country through the U.S. Department of Defense. The effect of Everitt's work on electrical engineering sci- ence was recognized in part when he was made president of the Institute of Radio Engineers in 1945; in 1954 when the institute bestowed upon him its highest award, the Medal of Honor "for his distinguished career as an educator and scientist; for his contributions in electronics and communi- cations as a major branch of electrical engineering . . .";

84 MEMORIAL TRIBUTES and in 1963 when he received the Mervin I. Kelly Award of the Institute of Electrical and Electronics Engineers "for out- standing leadership and many contributions in the field of telecommunications." His impact on engineering educa- tion has been cited in many of the honorary degrees and awards that have been bestowed upon him: tion." "One of the outstanding leaders of all time in engineering educa- "For exceptional leadership and innovation in engineering education, distinguished contributions to science and advancement of the engi- neering profession, and meritorious service to society." He was a founding member of the National Academy of Engineering, and he was honored by scores of awards and citations from national and international professional and governmental agencies, including honorary doctorates from ten universities in the United States and abroad. In 1984, at the centennial celebration of the Institute of Electrical and Electronics Engineers, he was named one of the top ten electrical engineers of all time and one of an even more select group of top engineering educators.

Next: Ulrich Finsterwalder »
Memorial Tributes: Volume 4 Get This Book
× 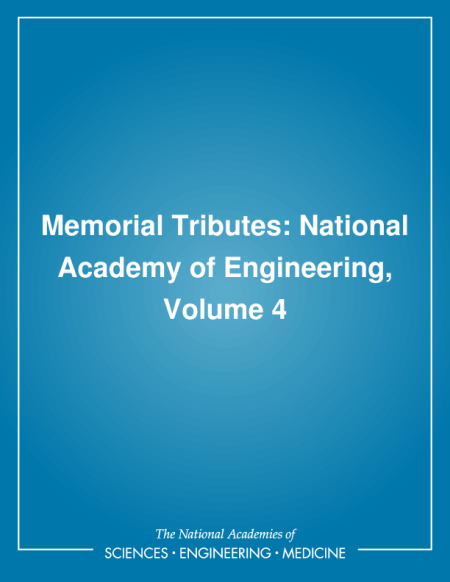