Get This Book
Visit NAP.edu/10766 to get more information about this book, to buy it in print, or to download it as a free PDF.
« Previous: Appendix A: Structural Failures in Mississippi Schools
Page 110 Share Cite
Suggested Citation:"Appendix B: Shopping Center Damage: A Detailed Analysis." National Research Council. 1991. Hurricane Elena, Gulf Coast: August 29 - September 2, 1985. Washington, DC: The National Academies Press. doi: 10.17226/1765.
×

Elena inflicted extensive damage on many commercial structures along the Mississippi Gulf Coast. Notable examples were the Jackson Square shopping center in Gautier and the Sears Towne shopping center in Pascagoula. At Jackson Square, sections of the roof membrane were removed, as well as sections of the decking. In one location, the bar joists failed and the wall collapsed. This wall was reinforced with steel columns whose hold-down bolts failed in tension. The failed bar joists were undoubtedly improperly anchored into the top of the wall, but the lower flange of the joists also buckled.

These roofs would have been designed for a live lead of no more than 20 lb/ft2, and the dead lead was probably less than 5 lb/ft2. In carrying this lead the compression flange of the joists would have been braced by the decking.

The roof should also have been designed for a wind uplift of either 24 or 29 lb/ft2, depending on whether a 110 or 120 mph design wind speed was used. The net upward force would thus be of the same order as the net downward lead, but the upward lead must be resisted using a compression flange braced by very lightweight bridging, and the supports must act in tension, not compression. Since these forces include the effect of wind, the allowable stresses would probably have been increased by one-third and may have led the designer to consider the net downward lead as the critical loading case.

Using the present version of the Standard Building Code, these bar joists should have been designed on the basis of 32 lb/ft2 for normal internal pressure, or 40 lb/ft2 if the designer had recognized the danger of window damage. Since this building was very exposed and the actual wind speed was probably within 10 percent of the design wind speed, the uplift could well have been

about 35 to 40 lb/ft2, or 30 to 50 percent more than the design level. Since these roofs were probably also designed using the 33 percent increase in allowable stress, it was not at all surprising that this structure failed.

The damaged wall was probably designed on the basis of 26 or 32 lb/ft2, again depending on the wind speed chosen. The present code would require 28 lb/ft2. However, the loss of top support would have had the same effect as increasing the wind pressure to more than 100 lb/ft2. Again, it is not surprising that the component failed.

Similar conclusions can be drawn from the failure of the Sears Towne shopping center in Pascagoula. It is interesting to note that roof failures took place in both instances on the edge nearest the parking lot, adjacent to the glazed wall, but in Jackson Square the damage was caused by north winds and in Pascagoula from southeast winds.

At Sears Towne, the parking lot contained much loose gravel. A large amount was found inside the buildings, suggesting that it had been picked up by storm winds and had smashed the windows, probably precipitating the roof failure.

In a tire store, the bar joists had been laid parallel to the glazed wall. When this failed, the high uplift on the leading edge of the roof was carried primarily by one bar joist. When the connection between the joist and the wall failed, the roof simply rolled back. The joists had been welded to plates set in the top of the wall. Separation occurred at the weld.

The Steel Joist Institute recommends the use of 1-inch-long welding at this point. Assuming a 1/4-inch fillet weld, the joint should have an uplift capacity of at least 12 kips. Even allowing for high internal pressures and full design wind speed, it is unlikely that the uplift load at the joint would have exceeded 3 kips. Since the wind speed would have had to exceed 200 mph to have produced pressure that exceeded the capacity of a properly constructed joint, one can only conclude that the welds did not meet the specification.

Another interesting feature at the shopping center was the failure of an unreinforced masonry wall in an area of high suction between two buildings. Unreinforced block walls 18 to 20 ft high are often found in this type of shopping center. They are considered acceptable because they meet the slenderness ratios given in the Standard Building Code. They cannot, however, be shown by any engineering calculation to meet the wind-loading requirements of the code of a single-story building on a hurricane-prone coast. In this case, the wall was not properly supported at the roof-to-wall connection. Indeed, failure appears to have been initiated in that region. 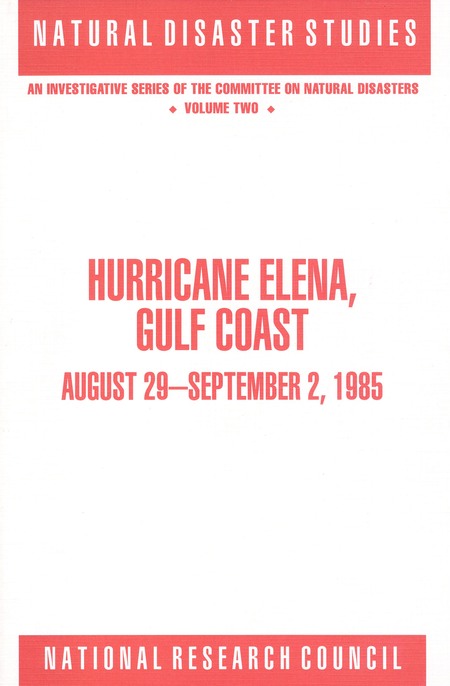