Considerations in Contact Lens Use Under Adverse Conditions: Proceedings of a Symposium (1991)

The first is corneal neovascularization. Normally, the cornea is avascular, except for the limbal region. When vascularization extends more than 2 millimeters inside the clear cornea, we consider it pathologic. It is thought to be secondary to chronic hypoxia and inflammation. Typically this is seen with soft lenses and in particular with extended-wear soft lenses.

Early neovascularization is of no long-term visual consequence once recognized, but it does provide a clue to corneal health. It will respond Figure 1 shows an example of advanced favorably to cessation of the lens. neovascularization in the setting of aphakic extended wear. This degree of vascularization clearly leads to a decrease in visual acuity.

The most important potential consequence of contact lens wear is corneal ulceration. This usually takes the form of microbial keratitis (Figure 2). Although extended-wear contact lenses are singled out in Figure 2 the rationale shown here applies equally to daily-wear lenses. Figure 2 illustrates that the development of microbial keratitis presumably requires only two factors. The first is some compromise of the corneal surface in the form of an insult to the epithelium whether through cumulative anoxia or mechanical abrasion. The second is the inoculation of a sufficient quantity of pathogenic organisms to allow infiltration of the anterior stroma.

It is clear that contact lens use has the ability to compromise the epithelium. More controversial is the origin of the bacterial inoculum. Whether this develops in the eye with attachment of bacteria to the soft lens or whether the inoculum derives from contaminated lens care products is unclear. However, in general terms it is certainly true that microabrasions of the 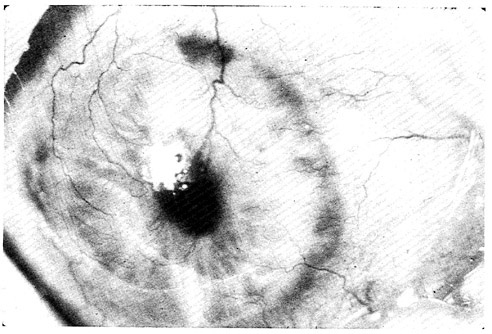 FIGURE 1 Advanced neovascularization of the cornea.

cornea and the bacterial ecology of contact lens wear in general work in concert to produce infection. It is evident that bacterial contamination appears at least at present to be an inevitable consequence of soft contact lens wear.

Figure 3 shows dramatically the adherence of gram-negative bacteria to the soft contact lens of an asymptomatic patient.

Duran et al. (1987) placed new soft contact lenses of both high and low water content, incubated in vitro with pseudomonas, and showed rapid and irreversible bacterial adhesion and proliferation on the contact lens surface in conjunction with the elaboration of a bacterial biofilm. This begins within minutes of exposure and underscores the potential danger of contaminated solutions, which theoretically can then infect soft lenses in the absence of lens deposits, breaks, or abnormalities in the lens itself.

This has its reflection in a clinical correlate. Donzis et al. (1987) cultured contact lens paraphernalia of asymptomatic contact lens users presenting for routine follow-up and found that about half of the lens cases tested were contaminated. About 13 percent of the commercial lens care products were also contaminated, and 12 out of 12 homemade saline solutions were culture positive, including 2 with acanthamoeba. This contamination was seen with all lens types, with all wearing patterns, and in patients who followed recommended procedures. 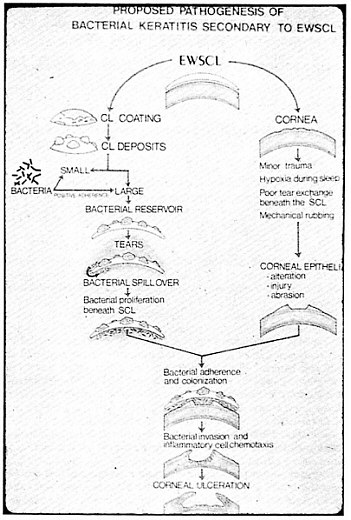 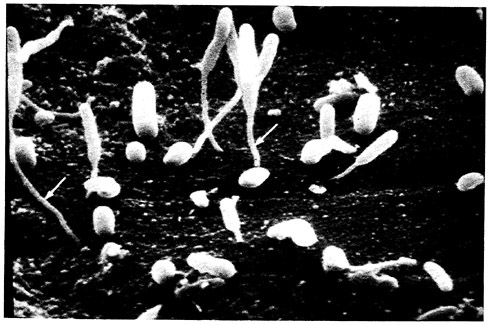 Microbial keratitis associated with contact lens use can take many forms and presents with the full spectrum. Figure 4 Figure 5 through Figure 6 are taken from three patients who were all cosmetic contact lens wearers between the ages of 20 and 30. Figure 4 is that of a 20-year-old undergraduate student who presented on the same day as her initial complaints with three small infiltrates, the largest of which had an epithelial defect surrounding it, on top of it. This was cultured and grew staphylococcus. She was treated promptly and aggressively and healed within a number of days. No visual sequelae resulted from the infection; however, it did cause significant pain and concern over the short term.

The man in Figure 5 was not quite so lucky. He presented about 24 to 48 hours after initial symptoms. Figure 5 was taken 6 months after treatment. His (visual) acuity is 20/20. However, the scar in his corneal stroma extends into the visual access, and he is miserable under brightly lit conditions.

Unfortunately, despite widespread publicity concerning contact lens infections, there are still severe cases. Figure 6 is shows a 25-year-old woman who had worn extended-wear contact lenses on a weekly basis—she removed them every 7 days—for 4 years. Three days after her last standard 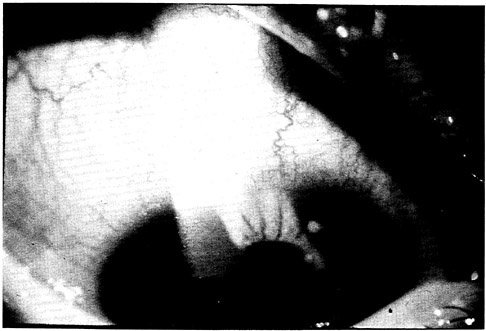 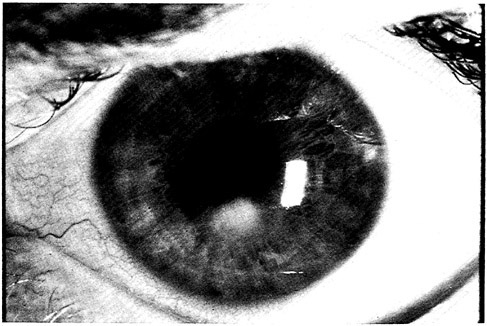 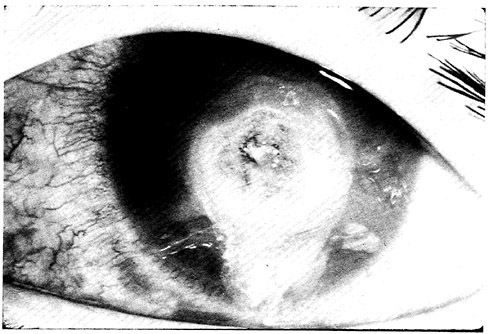 cleaning, she developed a foreign body sensation and immediately removed the lens. The next morning she was seen by general practitioner, who treated her with sulfa drops. The following day her vision decreased. She then saw a local ophthalmologist, who referred her to me the same afternoon. The photograph in Figure 6 was taken within an hour of presentation. Her cornea was already perforated and what is shown in Figure 6 is some tissue adhesive that was used to stabilize her anterior chamber. I cultured pseudomonas both from the cornea and from one solution and her contact lens case. She has required penetrating keratoplasty for restoration of her globe.

Finally, it is important to mention acanthamoeba acanthamoeba keratitis. Figure 7 is a photograph of the cornea of a medical student who wore extended-wear lenses only at night when on call. He developed acanthamoeba keratitis, which is still under treatment. It is a very difficult infection to treat, and our present armamentarium is quite inadequate. Epidemiologically, this infection is linked to the use of homemade saline and to swimming with contact lenses in place. The best thing about this devastating infection is that it is rare.

Chart 1 presents the microbiology of cases of lens-associated microbial keratitis that we reviewed over a 4-year period at the Massachusetts Eye and Ear Infirmary. During this time contact-lens-related ulcers accounted for about 30 to 40 percent of all cases of corneal ulceration. As shown in the table the gram-positive and gram-negative organisms are about evenly 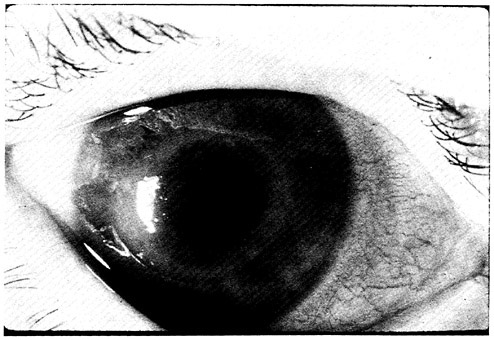 divided, but there are certain patterns. Staphylococci and the streptococci account for about 90 percent of the gram-positives, and there is a disproportionate contribution of pseudomonas in the gram-negatives.

These cases also include the aphakic and some therapeutic lenses. Considering only the lenses used for cosmetic purposes, they are mostly gram-negative, and almost all of them are pseudomonal.

Diagnosis is based on clinical presentation wherein all infiltrates underlying an epithelial ulceration are presumed microbial. We take cultures by scraping the cornea and then start “shotgun” antibiotic therapy based on the microbiology shown above, typically with fortified aminogylcoside and cephalosporin antibiotics. In the setting of cosmetic use, we add either ticarcillin or piperacillin since these medications are synergistic with aminoglycosides against pseudomonas. Antibiotic choice and regimen are then suited to culture results and clinical course. 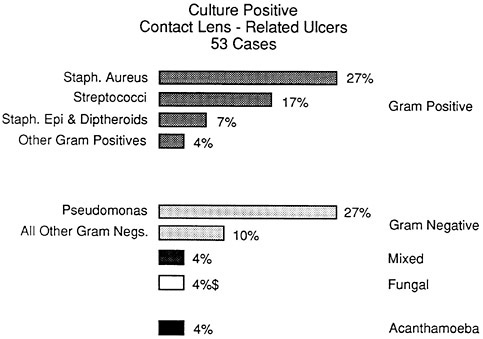 The preceding comments illustrate some of the medical background concerning contact-lens-related infections. I sense, however, that what is really important not just from the military perspective but from the civilian perspective as well is some concept of the rate at which such infections occur, the relative risk by various lens types, and the hygiene strategies that may impinge on the infection rates. This information, unfortunately, is very difficult to come by. Most studies to date involving large numbers of patients are from the contact lens industry. These are frequently premarket-approval trials in which both patients and eye care professionals are chosen on a selected basis, and the situation clearly does not resemble a real-life context.

What about the more important complications? What about microbial keratitis?

and Poggie et al., 1989). The first, a case-control study of ulcerative keratitis among soft contact lens wearers, found that the relative risk of ulcerative keratitis was 10 to 15 times greater among users of extended-wear lenses. Additionally, this risk increased along with extent of time since removal of the lens for cleaning. Risk for this condition was only marginally affected by lens hygiene habits. Of lens-care-related issues, failure to clean the contact lens case (potentially a difficulty in military settings) was the most imporant.

The second study estimated the incidence of ulcerative keratitis among soft contact lens wearers. Ths study, using the entire population of Maine, New Hampshire, Vermont, Rhode Island, and Massachusetts as its base, found a rate of approximately one case of ulcerative keratitis per 500 wearers of extended-wear lenses per year, and one per 2,500 per year for wearers of daily-wear soft lenses.

One may extrapolate from these studies to estimate 12,000 cases of soft-contact-lens-associated ulcerative keratitis per year in the United States. These studies have led to a reduction in suggested wearing time for extended wear lenses by the Food and Drug Administration from 30 to 7 days. Whether this is sufficient remains to be seen. From a military perspective, if one assumes a population of 15,000 aviators wearing soft contact lenses on various schedules, one may estimate perhpas 15 cases of ulcerative keratitis per year in this population. Is this acceptable from a military standpoint? This is the kind of analysis the military must undertake before making a commitment.

Finally, given the rates estimated for ulcerative keratitis, it is clear that the internal military studies performed to date cannot address this question. These military trials may provide interesting information on costs and minor irritation that impede successful lens use in the field. However, the statistical power of these military studies in insufficient to estimate the risk of infection in military settings and such extrapolations are unwarranted.

Next: Corneal Topography and Contact Lenses »
Considerations in Contact Lens Use Under Adverse Conditions: Proceedings of a Symposium Get This Book
× 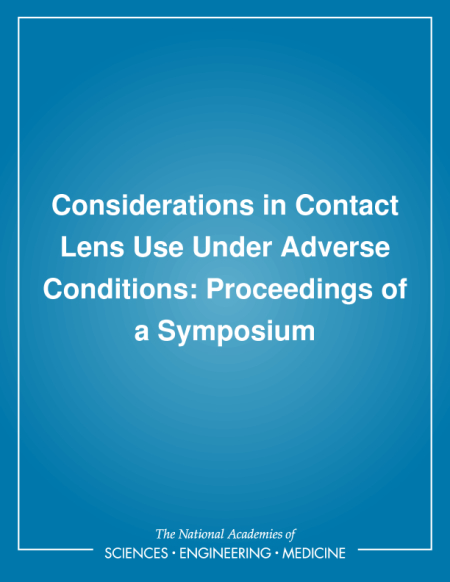 This book summarizes current understanding of the scientific, clinical, and technical issues surrounding the use of contact lenses. It discusses the special occupational conditions experienced by military personnel, particularly in extreme environments, that give rise to the question of whether or not to use contact lenses.

Experts in optometry, ophthalmology, visual psychophysics, and engineering describe recent developments in design and use; and representatives of the military services provide examples of actual situations in aerospace settings. Considerations in Contact Lens Use Under Adverse Conditions will be of particular interest to those involved in the design of contact lenses and those responsible for occupational safety and health matters in the private sector.