Get This Book
Visit NAP.edu/10766 to get more information about this book, to buy it in print, or to download it as a free PDF.
« Previous: References
Page 91 Share Cite
Suggested Citation:"Appendix A Geologic Setting and Prehistoric Volcanic Activities." National Research Council. 1991. The Eruption of Nevado Del Ruiz Volcano Colombia, South America, November 13, 1985. Washington, DC: The National Academies Press. doi: 10.17226/1784.
×

Two geologic provinces, with distinct lithologic and structural characteristics, can be differentiated in the Nevado del Ruiz region. The boundaries of these provinces are marked by a series of north-south-trending faults, as shown in Figure 1.5 . One of these provinces is composed of a metamorphic-igneous complex located between the Arnazazu-Manizales fault on the west, and the Mulatos fault (running parallel to the eastern foothills escarpment) on the east. This province forms a 45-km-wide band from the city of Manizales in the west to the foothills of the eastern front of the Central Cordillera and includes Nevado del Ruiz volcano. The second geologic province consists of a thick series of Cenozoic sedimentary rocks of the Magdalena River valley that extends east from the Mulatos fault to the Magdalena River and includes the 20-km-wide floodplain of the Magdalena River.

The oldest rocks in this area, which form the base of the Central Cordillera, consist of a series of tectonic blocks of Precambrian granodiorites, schists, gneisses, amphibolites, and migmatites (Barrero and Vesga, 1976). A younger complex of Paleozoic metamorphic rocks, including schists, phyllites, quartzites, and marbles, overlies the older basal rocks. These Precambrian and Paleozoic rocks are intruded by a series of Jurassic, Cretaceous, and Tertiary batholiths and dikes composed of granodiorites, quartz diorites, and quartz monzonites.

Volcanism apparently began during the Miocene with the release of extensive lavas of andesite and dacite that capped the older metamorphic and intrusive rocks. Subsequent periods of effusive activities resulted in an extensive sequence of differentiated lava flows and pyroclastic units consisting mainly of andesites and dacites that were erupted from distinct central vents. These flows seem to have occurred mainly along two series of fractures: one set of fractures strikes in a N2O°E direction parallel to the right-lateral Palestina fault that passes near the summit of the volcano; the other series of fractures is oriented in a N12°E to N130°E direction approximately orthogonal to the first fracture set. Ruiz volcano is composed of flows and pyroclastics that extend 30 km to the east and more than 35 km west of the vent area.

Extensive glaciers formed in the Nevado del Ruiz area during late Pleistocene and Holocene times. At the height of Pleistocene glaciation, an ice cap blanketed the summit region and terminated near the 3,600-m elevation on the west flank and near the 3,200-m elevation on the east (Herd, 1982). Valley glaciers drained from the ice cap downstream along river valleys to an approximate elevation of 2,700 m to the east and 3,200 m to the west as indicated by glacial erosion features (striae, grooving), moraines, and “V”-shaped valleys. Some of the preexisting tephra cover was stripped away by the advance of these glaciers.

A postglacial eruptive phase of the volcano began during Holocene time. Episodes of explosive volcanism generated a number of lahars and pyroclastic flows in several directions from the volcano. To the north they are intercalated with the late Quaternary tephra mantle, while to the east the lahar deposits fill most of the upper Azufrado River valley, remaining as terraces above the present river level. The observed degree of soil development between lahars indicates that the mudflows are of substantially different ages. A more detailed description of the lahars in the Nevado del Ruiz area, including two historically recorded events, is given in the body of this report (see Chapter 1 ).

The Magdalena River Valley, west of the river, includes a relatively flat plain 20-25 km wide between the Mulatos fault along the eastern foothills of Nevado del Ruiz and the north-bound river. The surficial deposits of this region are Quaternary floodplain deposits of stratified sand, silt, and gravel. Mesas, composed of Upper Tertiary sedimentary rocks, stand prominently above this plain and are composed of alluvial conglomerates, sandstones, and siltstones. The various lahars generated during late Pleistocene and Holocene times are intercalated with the Holocene alluvial deposits and both can be seen overlying the Tertiary rocks.

The Ruiz-Tolima volcanic centers have erupted astride the Central Cordillera, the middle of three parallel branches at the northern end of the Cordillera mountain belt, which to the south becomes the Andes Mountain chain. This zone of intense deformation and volcanism on the northwest side of South America is a direct result of the subduction of the Nazca tectonic plate beneath the South American plate ( Figure A.1 ) at a rate of about 5 cm/yr. The tectonic setting of this region is even further exacerbated because of a triple-point juncture of the Caribbean, Cocos, and Nazca plates directly to the northwest.

The main fault systems in the Nevado del Ruiz area can be summarized as follows: 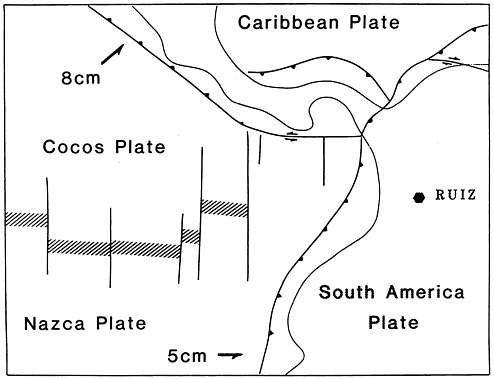 PREHISTORIC ACTIVITY OF THE VOLCANO

The Nevado del Ruiz complex has undergone a phase of explosive volcanism during Holocene times. A number of lahars and pyroclastic flows exposed in the Ruiz area ( Figure A.2 ) provide a record of the various explosive eruptions of the volcano. Almost all of these deposits are postglacial in origin. Radiocarbon dating indicates that the earliest flow occurred between 13,000 and 8600 B.P. (before the present) (Herd, 1982). Several additional eruptions have occurred between 6300 B.P. and the present. The most recent Ruiz tephra examined in 1985 is believed to be related to the historically recorded eruption of March 12, 1595.

Over time, the violent, episodic eruptions partially destroyed the north and northeast slopes of the Nevado del Ruiz summit. A large depression at the upper Azufrado and Gualí river valleys was caused by a lateral explosion corresponding to the intense eruptive activity that took place around 3100 B.P. The depression is approximately 3 km wide, 1,000 m deep, and 5 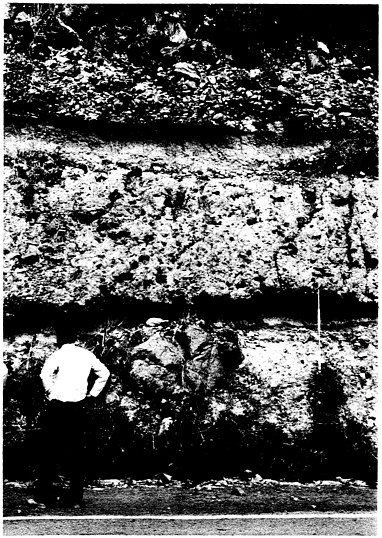 FIGURE A.2 A roadcut near Lérida showing two Quaternary lahars, each composed of an upper, fine-grained zone and a lower, poorly sorted, coarse clast zone. The upper portion of the picture shows the slope colluvium. However, farther up the roadcut, three additional lahar units similar to those shown are exposed. (Photo by R. Updike, USGS.)

Page 96 Share Cite
Suggested Citation:"Appendix A Geologic Setting and Prehistoric Volcanic Activities." National Research Council. 1991. The Eruption of Nevado Del Ruiz Volcano Colombia, South America, November 13, 1985. Washington, DC: The National Academies Press. doi: 10.17226/1784.
×
km long. The side walls of the depression are oriented along the N20°E direction of the Palestina fault. Deposits associated with the 3100 B.P. eruption have been mapped at the bottom of this depression by Thouret and others (1985) and include large amounts of debris resulting from the partial collapse of the northeastern flank of the volcano, as well as surge, blast, and lahar deposits. The total thickness of these deposits is approximately 50 m. A more recent sequence with exactly the same succession of deposits overlies the sequence described above. This upper sequence is thinner (about 10 m thick) and is believed by several investigators (Thouret et al., 1985; Herd, 1982) to correspond to the explosion of March 12, 1595.

Deposits of lahars and pyroclastic flows generated during these various eruptions have been mapped by Herd (1982) at various localities in the Ruiz area. Lenses of these deposits have been observed on the north side of the volcano, between the Gualí River and Aguacaliente Creek, at elevations of 3,600-3,800 m. Two extensive lahars in the large depression of the upper Azufrado River valley on the northeast flank of the mountain were also mapped by Herd (1982), who reported that the lahar deposits extend from snow line down to an elevation of 3,200 m. Older lahar deposits in the foothills near the floodplain of the Magdalena River valley were also observed by the study team. 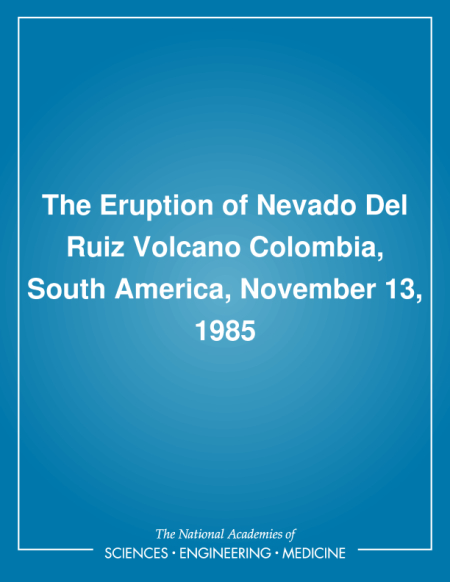 On November 13, 1985, catastrophic mudflows swept down the slopes of the erupting Nevado del Ruiz volcano, destroying structures in their paths. Various estimates of deaths ranged as high as 24,000 residents. Though the nature and extent of risk posed by the mudflows to local communities were well documented before the event and extensive efforts had been made to communicate this information to those at risk, the affected communities were caught largely unaware.