Visit NAP.edu/10766 to get more information about this book, to buy it in print, or to download it as a free PDF.
Page i Share Cite
Suggested Citation:"Front Matter." National Academy of Sciences. 1991. Planetary Sciences: American and Soviet Research/Proceedings from the U.S.-U.S.S.R. Workshop on Planetary Sciences. Washington, DC: The National Academies Press. doi: 10.17226/1790.
×

Foreword The Academy of Sciences of the USSR and the National Academy of Sciences of the United States of America sponsored a workshop on Planetary Sciences at the Institute for Space Research in Moscow, January 2-6, 1989. The purpose of the workshop, which was attended by Soviet and American scientists, was to examine the current state of our theoretical understanding of how the planets were formed and how they evolved to their present state. The workshop assessed the type of observations and experiments that are needed to advance understanding of the formation and evolution of the solar system based on the current theoretical framework In the past, models of the formation and evolution of the planets have been just that, models. They essentially portrayed possibilities: that events could have transpired in the way depicted without violating any known constraints and that, if they did take place, certain consequences would follow. Now, we may be advancing beyond that stage to the point where it may be possible to settle fairly definitely on certain scenarios and exclude others. Assessment of the present state of theories and the observational base will help determine the extent to which this is the case. This workshop focused on the present status of observational and theoretical understanding of the clearing of stellar nebulae, planetesimal formation, and planetary accretion; the evolution of atmospheres; the rela- tionship of still existing primitive bodies to these topics; and the relationship of ground-based and in situ measurements. As the papers presented at the workshop and published in this volume show, astronomical observations are now at hand that will reveal the sequence of events occuring in circumstellar disks with sufficient precision to define the models of planetary formation. Moreover, theories for the origin of the solar system have reached a point where it is now possible, . . .

indeed it is essential, to examine them in the broader context of the origins of planetary systems. Until recently, it has not been possible to select among a range of feasible scenarios the one that is most likely to be correct, in the sense that it satisfies observational and theoretical constraints. We are now advancing to that stage. Similarly, theories for the formation of planetary atmospheres are becoming more sophisticated and respond to an increasingly complex set of observational data on relative abundance of atmospheric species and the state of degassing of the interior of the Earth. But, as the papers presented here will demonstrate, there is still a way to go before all the questions are resolved. The topics discussed at this workshop were timely, and the debate and discussion were full and informative. The participants learned a great deal, and the scientific basis for cooperation in planetary sciences was strength- ened appreciably. The Soviet hosts extended their usual thoughtful and gracious hospitality to the American delegation, and the entire experience was memorable and rewarding. T.M. Donahue Chairman, NAS/NRC Committee on Cooperation with the USSR on Planetary Science 1V

6. MAGNETOHYDRODYNAMIC PUZZLES IN THE PROTOPLANETARY NEBULA Eugene H. Levy 7. FORMATION OF PLANETESIMALS Stuart] Weidenschilling 8. FORMATION OF THE TERRESTRIAL PLANETS FROM PLANETESIMALS George ~ Wetherill 9. THE RATE OF PLANET FORMATION AND THE SOLAR SYSTEM'S SMALL BODIES Motor S. Safronov 10. ASTROPHYSICAL DUST GRAINS IN STARS, THE INTER- STELLAR MEDIUM, AND THE SOLAR SYSTEM Robm D. Gehrz 11. LATE STAGES OF ACCUMULATION AND EARLY EVOLUTION OF THE PLANETS Audrey ~ Amazed and G.~ Pechemikova 12. GIANT PLANETS AND THEIR SATELLITES: WHAT ARE THE RELATIONSHIPS BETWEEN THEIR PROPERTIES AND HOW THEY FORMED? David ~ Stevenson 13. THE THERMAL CONDITIONS OF VENUS Vladimir 1V Zharkov and V.S. Solomatov 14. DEGASSING James C. G. Walker 15. THE ROLE OF IMPACTING PROCESSES IN THE CHEMICAL EVOLUTION OF THE ATMOSPHERE OF PRIMORDIAL EARTH Lev Al Mukhin and M.~ Gerasimov 16. LITHOSPHERIC AND ATMOSPHERIC INTERACTION ON THE PLANET VENUS Vla~lislav ~ Molkov .. . V111 70 82 98 116 126 143 163 174 191 203 218

Next: 1. The Properties and Environment of Primitive Solar Nebulae as Deduced from Observations of Solar-Type Pre-Main Sequence Stars »
Planetary Sciences: American and Soviet Research/Proceedings from the U.S.-U.S.S.R. Workshop on Planetary Sciences Get This Book
× 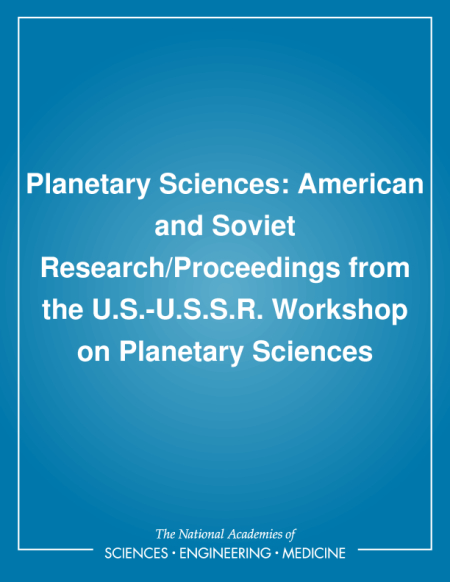 This book contains the proceedings from a workshop on planetary sciences sponsored by the Academy of Sciences of the USSR and the National Academy of Sciences. The proceedings include papers written by American and Soviet scientists who examine the current theoretical understanding of how the planets were formed and how they evolved to their present state. They assess the type of observations and experiments that are needed to advance understanding of the formation and evolution of the solar system based on the current theoretical framework.