Get This Book
Visit NAP.edu/10766 to get more information about this book, to buy it in print, or to download it as a free PDF.
« Previous: Bibliography
Page 283 Share Cite
Suggested Citation:"Glossary of Terms." Institute of Medicine. 1991. Adverse Effects of Pertussis and Rubella Vaccines. Washington, DC: The National Academies Press. doi: 10.17226/1815.
×

Arthralgia. Pain in a joint or joints.

Arthritis. Inflammation of a joint or joints detectable as swelling, redness, and tenderness.

Aseptic meningitis. An inflammation of the meninges with typical changes in the cerebrospinal fluid, including increased numbers of white blood cells, normal glucose, and absence of bacteria on examination and culture. The most common causes include viral infection and noninfectious causes such as lead poisoning.

Attributable fraction (exposed). The attributable fraction among exposed individuals is the proportion by which the incidence rate of the outcome among those exposed would be reduced if the exposure were eliminated. It is assumed that causes other than the one under investigation have had equal effects on exposed and unexposed groups and that the effects of exposures are additive.

Attributable fraction (population). The attributable fraction in the population is the proportion by which the incidence rate of the outcome in the entire population would be reduced if the exposure were eliminated. It is assumed that causes other than the one under investigation have had equal effects on the exposed and unexposed groups and that the effects of exposure are additive.

Autism. The condition of being dominated by subjective, self-centered trends of thought or behavior that are not subject to correction by external information. One form, infantile autism, is a condition of the early years of life characterized by failure to relate in the usual way to people and situations and by repetitive activities, developmental language disorders, and a marked inability to adjust socially.

Bias. Deviation of results or inferences from the truth, or processes leading to such deviation.  Any trend in the collection, analysis, interpretation, publication, or review of data that can lead to conclusions that are systematically different from the truth. Not to be confused with prejudice or partisan point of view, as is the conventional usage.

Case-comparison study. (Syn: case-control study). A study that starts with the identification of persons with the disease or condition (adverse event) of interest and a suitable control (comparison) group of persons

without the disease. The relation of an attribute (e.g., immunization) to the disease is examined by comparing the diseased and nondiseased groups with regard to how frequently the attribute is present, or if quantitative, the levels of the attribute, in each of the groups.

Cohort study. (Syn: prospective, follow-up study). A study in which subsets of a defined population can be identified who are, have been, or in the future may be exposed or not exposed, or exposed in different degrees, to a factor or factors hypothesized to influence the probability of occurrence of a given disease (adverse event) or other outcome. The essential feature of the cohort design is observation of the population for a sufficient length of time to generate reliable incidence or mortality rates.

Controlled study. Controlled studies are studies that use a comparison group that differs from the subjects of the study in either disease experience (outcome) or allocation to a regimen (exposure). Allocation to a regimen can be random, as in a randomized clinical trial or study, or nonrandom, as in an observational cohort study or a case-control study.

Erythema multiforme. An inflammatory eruption characterized by symmetrical erythematous, edematous, or bullous lesions of the skin or mucous membranes.

to shortened in vivo survival of red blood cells, and an inability of the bone marrow to compensate for their decreased life span.

Hypsarrhythmia. An electroencephalographic (EEG) abnormality observed in infants, with random, high-voltage slow waves and spikes that arise from multiple foci and spread to all cortical areas. This abnormal EEG pattern may be manifested clinically by spasms or quivering spells (myoclonus) and may be associated with mental retardation.

Immunization. The process of rendering a subject immune or of becoming immune. In this report the term has been accepted to be synonymous with vaccination. See Vaccination.

active i. Inoculation with a specific antigen to induce an immune response.

passive i. The conferral of specific immunity by the administration of sensitized lymphoid cells or serum from immune individuals.

Infantile spasms. A condition characterized by sudden flexion of the arms, forward flexion of the trunk, and extension of the legs. The attacks last only a few seconds but may be repeated many times a day. They are restricted to the first 3 years of life, often to be replaced by other forms of seizures.

of masking is to keep subjects and/or investigators unaware of knowledge that might introduce bias and, thus, eliminate the possible effects of bias.

Monitoring System for Adverse Events Following Immunization (MSAEFI). A passive surveillance system designed and monitored by the Centers for Disease Control for the purpose of collecting nationwide data on adverse events temporally associated with receipt of vaccines purchased with federal, state, or local government funds.

Noncontrolled study. Noncontrolled studies are those that do not use a comparison group that differs from the subjects of the study in either disease experience (outcome) or allocation to a regimen (exposure). Examples include individual and comparative case series, case reports, and anecdotes.

Odds ratio (OR). In studies of adverse events following immunization, the OR generally refers to the exposure-odds ratio, which, for a set of case-comparison data, is the ratio of the odds in favor of exposure among the cases to the odds in favor of exposure among noncases. Under certain circumstances, usually met in the study of vaccine-related adverse events, the OR is considered a good estimate of the relative risk.

Peripheral mononeuropathy. A syndrome of sensory, motor, reflex, and vasomotor symptoms, singly or in any combination, produced by disease of a single peripheral nerve.

Pertussis (whooping cough). An infectious disease caused by Bordetella pertussis, a small, nonmotile, gram-negative coccobacillus. The disease is characterized by catarrh of the respiratory tract and peculiar paroxysms of cough, ending in a prolonged crowing, or whooping, respiration. The disease is most frequently encountered in children, is much more prevalent in cold weather, and is very contagious.

Relative risk (RR). The ratio of the risk of disease or death among the

exposed to the risk among the unexposed. Generally derived from cohort studies.

Reye syndrome. An acute and often fatal childhood syndrome of encephalopathy and fatty degeneration of the liver, marked by rapid development of brain swelling, hepatomegaly, and altered levels of consciousness.

Rubella (German measles). A mild viral infection caused by an RNA virus classified as a togavirus. The infection is characterized by a pink, discrete, and confluent macular exanthem and is usually preceded by rhinorrhea, sore throat, and bulbar and, occasionally, palpebral conjunctivitis. Arthralgia is common, and monarticular arthritis occurs in 20 percent of patients, more so adults than children. Transplacental infection of the fetus in the first trimester produces developmental abnormalities of the heart, eyes, brain, bone, and ears in up to 40 percent of cases.

Sudden infant death syndrome (SIDS). The unexpected and unexplained death of an apparently well, or virtually well, infant. SIDS is the most common cause of death of infants between ages 2 weeks and 1 year, accounting for one-third of all deaths in this age group.

Vaccination. Inoculation with a vaccine for the purposes of inducing immunity. In this report the term has been accepted to be synonymous with immunization. See Immunization.

pertussis v. [USP]. A sterile bacterial fraction or suspension, in a sodium chloride solution or other suitable diluent, of killed pertussis bacilli of a strain or strains selected for high antigenic efficiency. It is an active immunizing agent against pertussis.

pertussis v., adsorbed [USP]. A sterile bacterial fraction or suspension, in a suitable diluent, of killed pertussis bacilli of a strain or strains selected for high antigenic efficiency and precipitated or adsorbed by the addition of aluminum hydroxide or aluminum phosphate and resuspended. It is an active immunizing agent against pertussis. 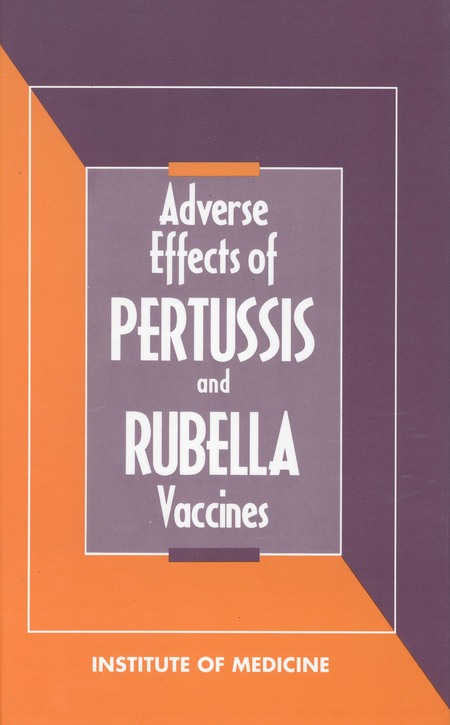 Parents have come to depend on vaccines to protect their children from a variety of diseases. Some evidence suggests, however, that vaccination against pertussis (whooping cough) and rubella (German measles) is, in a small number of cases, associated with increased risk of serious illness.

This book examines the controversy over the evidence and offers a comprehensively documented assessment of the risk of illness following immunization with vaccines against pertussis and rubella. Based on extensive review of the evidence from epidemiologic studies, case histories, studies in animals, and other sources of information, the book examines:

The volume, which includes a description of the committee's methods for evaluating evidence and directions for future research, will be important reading for public health officials, pediatricians, researchers, and concerned parents.