Frontiers of Engineering: Reports on Leading-Edge Engineering from the 2012 Symposium (2013)

Get This Book
Visit NAP.edu/10766 to get more information about this book, to buy it in print, or to download it as a free PDF.
Page i Share Cite
Suggested Citation:"Front Matter." National Academy of Engineering. 2013. Frontiers of Engineering: Reports on Leading-Edge Engineering from the 2012 Symposium. Washington, DC: The National Academies Press. doi: 10.17226/18185.
×

Reports on Leading-Edge Engineering from the 2012 Symposium

NOTICE: This publication has been reviewed according to procedures approved by a National Academy of Engineering report review process. Publication of signed work signifies that it is judged a competent and useful contribution worthy of public consideration, but it does not imply endorsement of conclusions or recommendations by the NAE. The interpretations and conclusions in such publications are those of the authors and do not purport to represent the views of the council, officers, or staff of the National Academy of Engineering.

Funding for the activity that led to this publication was provided by General Motors, The Grainger Foundation, Microsoft Research, Defense Advanced Research Projects Agency, Air Force Office of Scientific Research, Department of Defense ASD(R&E)–Research Directorate-STEM Development Office, and Cummins Inc. This material is also based upon work supported by the National Science Foundation under Grant No.1202935. Any opinions, findings, and conclusions or recommendations expressed in this material are those of the author(s) and do not necessarily reflect the views of the National Science Foundation. In addition, the content of this publication does not necessarily reflect the position or the policy of the Government and no official endorsement should be inferred.

Copyright © 2013 by the National Academy of Sciences. All rights reserved.

This volume highlights the papers presented at the National Academy of Engineering’s 2012 U.S. Frontiers of Engineering Symposium. Every year, the symposium brings together 100 outstanding young leaders in engineering to share their cutting-edge research and technical work. The 2012 symposium was held September 13-15, and hosted by General Motors at the GM Technical Center in Warren, Michigan. Speakers were asked to prepare extended summaries of their presentations, which are reprinted here. The intent of this book is to convey the excitement of this unique meeting and to highlight cutting-edge developments in engineering research and technical work.

GOALS OF THE FRONTIERS OF ENGINEERING PROGRAM

The practice of engineering is continually changing. Engineers today must be able not only to thrive in an environment of rapid technological change and globalization, but also to work on interdisciplinary teams. Cutting-edge research is being done at the intersections of engineering disciplines, and successful researchers and practitioners must be aware of developments and challenges in areas that may not be familiar to them.

At the 2½-day U.S. Frontiers of Engineering Symposium, 100 of this country’s best and brightest engineers, ages 30 to 45, have an opportunity to learn from their peers about pioneering work being done in many areas of engineering. The symposium gives early career engineers from a variety of institutions in academia, industry, and government, and from many different engineering disciplines, an opportunity to make contacts with and learn from individuals they would not meet in the usual round of professional meetings. This networking

may lead to collaborative work and facilitate the transfer of new techniques and approaches. It is hoped that the exchange of information on current developments in many fields of engineering will lead to insights that may be applicable in specific disciplines and thereby build U.S. innovative capacity.

The number of participants at each meeting is limited to 100 to maximize opportunities for interactions and exchanges among the attendees, who are chosen through a competitive nomination and selection process. The topics and speakers for each meeting are selected by an organizing committee of engineers in the same 30- to 45-year-old cohort as the participants. Different topics are covered each year, and, with a few exceptions, different individuals participate.

Speakers describe the challenges they face and communicate the excitement of their work to a technically sophisticated but non-specialized audience. Each speaker provides a brief overview of his/her field of inquiry; defines the frontiers of that field; describes experiments, prototypes, and design studies that have been completed or are in progress, as well as new tools and methodologies, and limitations and controversies; and summarizes the long-term significance of his/her work.

As described in the second session, global warming, sustainability, and national security concerns are driving investment in vehicle electrification. Research in this area is focused on technology enablers such as energy storage systems, electric machine drives, and electrical system integration and control. Speakers covered recent improvements in automobile electrical energy storage systems where reducing the cost, size, and weight are key challenges; research in improved magnetic materials used in electric machine drives, including reduction of critical materials like rare earth elements; the impact of vehicle electrification on electrical transmission and distribution systems; and technical approaches to enhancing vehicle safety.

The term “serious games” describes the application of video game technologies into non-entertainment domains, and it is a medium of many design, engineering, and technical fields. Initially, serious games focused on training, with a second wave of applications focused on therapeutic and health behavior change efforts. The current focus of serious games is innovative crowd sourcing activities

that tackle scientific, organizational, and social challenges through video game play. This session began with an overview of the serious games space from a national policy and educational standpoint. This was followed by talks on moving innovative game technology from the lab to the living room, how serious science is being achieved with serious games such as Foldit, and the use of serious games as tools for process optimization and complex problem-solving.

The symposium concluded with a session that focused on the cell-cell or cell-tissue components of the biological interface of, for example, tendon to bone or cartilage to bone. In order to simulate these complex interactions, researchers focus on design of materials, control of cells, and design of bioreactors in which to grow and assess these systems. The three talks in this session described engineering tissue-to-tissue interfaces for the formation of complex tissues; identification and modulation of biophysical signals that control stem cell function and fate; and cultivating 3D tissue systems that better model human biology for drug discovery, personalized medicine, and tissue engineering.

In addition to the plenary sessions, the participants had many opportunities to engage in informal interactions. On the first afternoon of the meeting, participants broke into small groups for “get-acquainted” sessions during which individuals presented short descriptions of their work and answered questions from their colleagues. This helped attendees get to know more about each other relatively early in the program. On the second afternoon, General Motors hosted a “Ride-n-Drive” event where attendees could drive or ride in advanced vehicles such as the plug-in hybrid Volt and concept cars such as the two-seat EN-V that can operate autonomously.

Every year, a distinguished engineer addresses the participants at dinner on the first evening of the symposium. The speaker this year was Dr. Alan I. Taub, professor of materials science and engineering at the University of Michigan and former vice president of global R&D at General Motors, who gave a talk on the reinvention of the automobile for 21st century sustainability.

NAE is deeply grateful to the following organizations for their support of the 2012 U.S. Frontiers of Engineering Symposium:

NAE would also like to thank the members of the Symposium Organizing Committee (p. iv), chaired by Dr. Kristi Anseth, for planning and organizing the event.

Removing Carbon Dioxide from the Atmosphere: Possibilities and Challenges of Air Capture

Keeping Up with Increasing Demands for Electrochemical Energy Storage

The Car and the Cloud: Automotive Architectures for 2020

Moving Innovative Game Technology from the Lab to the Living Room

ENGINEERING MATERIALS
FOR THE BIOLOGICAL INTERFACE

Engineering Tissue-to-Tissue Interfaces and the Formation of Complex Tissues

Next: CLIMATE ENGINEERING »
Frontiers of Engineering: Reports on Leading-Edge Engineering from the 2012 Symposium Get This Book
× 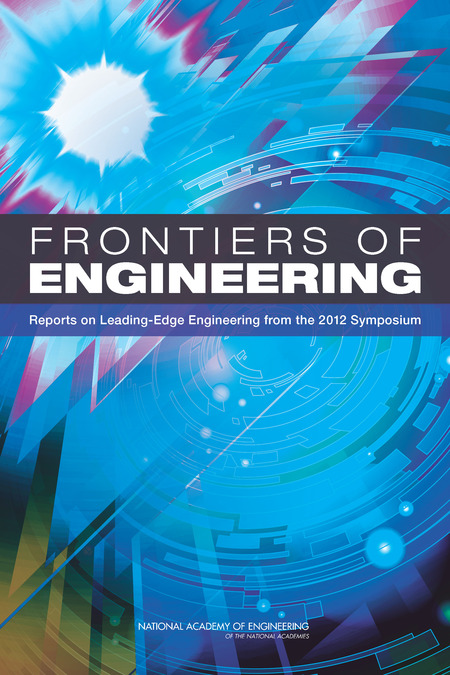 This volume highlights the papers presented at the National Academy of Engineering's 2012 U.S. Frontiers of Engineering Symposium. Every year, the symposium brings together 100 outstanding young leaders in engineering to share their cutting-edge research and technical work. The 2012 symposium was held September 13-15, and hosted by General Motors at the GM Technical Center in Warren, Michigan. Speakers were asked to prepare extended summaries of their presentations, which are reprinted here. The intent of this book is to convey the excitement of this unique meeting and to highlight cutting-edge developments in engineering research and technical work.