Visit NAP.edu/10766 to get more information about this book, to buy it in print, or to download it as a free PDF.
Page i Share Cite
Suggested Citation:"Front Matter." National Research Council. 1983. Acid Deposition: Atmospheric Processes in Eastern North America. Washington, DC: The National Academies Press. doi: 10.17226/182.
×

N AT I O N A L RESEARCH COUNCI L 2101 CONSTITUTION AVENUE WASHINGTON, D. C. 20418 OFFICE OF THE CHAIRMAN This report was undertaken by the National Academies, funded in part by a consortium of foundations*, because of the importance that we attach to i lluminating the critical issues concerning acid rain. The report summarizes current scientific understanding about what is known and what is not known about relations between emissions of acid f onning precursor gases and acid deposition. It should be of considerable interest to policy makers involved in regulatory deci- sion making and in setting research priorities. Those charged with private and public policy decisions will be par- ticularly interested in the study Committee' s evaluation of currently available scientific evidence as it affects the issue of linearity or non-linearity in relations between emissions and depo- sition. The public policy implications of this relationship are of major economic and political significance. The Committee devotes a great deal of attention to discussion of areas of uncertainty that are often the result of incomplete data. But despite the uncertainties, and even though there is as yet no complete understanding of the multiplicity of complex chemical reactions and transport mechanisms, the Committee cone ludes that there is no evidence that the relationship between emissions and deposition in northeastern North America is substantially non-linear when are rage d over a period of a year and over dimensions of the order of a million square kilometers. It is the Committee's judg- ment that if the emissions of sulfur dioxide f rom all sources in thi s re gion were reduced }fly the same f raction, the re suit would be a corresponding f Factional reduction in deposition. The data reviewed by the Committee support this conclusion only in northeastern North America. The judgment is based on several pieces of evidence. *Carnegie Corporation of New York Charles 13. Culpeper Foundation, Inc. The Wi lliarn and Flora Hewlett Foundation The John D. and Catherine T. MacArthur Foundation The Andrew W. Mellon Foundation The Rockef eller Foundation The Alf red P. Sloan Foundation THE NATIONAL RESEARCH COUNCIL IS THE PRINCIPAL OPERAllNG AGENCY OF THE NATIONAL ACADEMY OF SCIENCES AND THE NATIONAL ACADEMY OF ENGINEERING TO SE RVE GOVERNMENT AND OrH ER ORGANIZATIONS .

One is the well documented observation that the molar ratios of sulfates to nitrates deposited at many observation points in this region are nearly constant, and are similar to the molar ratios of the integrated emissions. The Committee believes that the simplest and most direct interpretation of this observation is the one they have given. A second observation that supports the Committee' s judgment comes from a 13-year run of observations at a single location in North America that shows the linear relationship between deposition at this one site and overall emissions. Although these observations were made at a single geographic point, they represent the result of well designed and carefully taken measurements. Finally, the j udgment draws upon the results of recent laboratory studies that are di scussed in the report. The Academies' process of selecting a di~rersif led, expert study Committee and subjecting the Conunittee's report to a substantive review was carefully followed in the preparation of this document. In fact, because of the importance of this particular question, the review procedure took a longer time than usual and involved a larger number of critical readers than is customary. I believe that we could not have found a more expert panel or have subjected this report to a more searching review. I hope that this report will help inf arm t'ne public policy decision making process and will also permit the design of research programs that will result in more complete scientific data leading to more definitive conclusions and recommendations in the future. Sincere ly, Frank Pres s Chairman

Preface In 1981 the National Research Council issued a report titled Atmosphere-Biosphere Interactions: Toward a Better Understanding of the Consequences of Fossil Fuel Combustion. The report focused on the effects on living systems of atmospheric pollutants associated with energy production. One chapter in the report described in detail the state of knowledge concerning the effects of acid precipitation on the biosphere. Based on its survey of field data in sensitive areas and the results of experiments, the report concluded that with respect to sensitive freshwater ecosystems, "It is desirable to have precipitation with pH values no lower than 4.6 to 4.7 throughout such areas, the value at which rates of degra- dation are detectable by current survey methods. . . . In the most seriously affected areas (average precipitation pH of 4.1 to 4.2), this would mean a reduction of 50 percent in deposited hydrogen ions." ~However, a change in pH, which is measured on a logarithmic scale, from 4.1 to 4.6 corresponds to a threefold decrease in deposited hydrogen ions rather than a twofold decrease. The conclusion was misinterpreted in the press and by others (see, for example, Science 214:38 October 2, 1981, and page A26 of The Washington Post for October 16, 1981) as a recommendation for a 50 percent reduction in emis- sions of the pollutant gases, sulfur dioxide and the oxides of nitrogen, that are precursors to acid precipi- tation. While the report concluded that the desired reduction in the deposition of hydrogen ions implies a reduction in emissions, it did not indicate how much additional control of emissions would be required to meet the goal. As a consequence, the Chairman of the National Research Council asked the Environmental Studies Board to 1X

review the current state of knowledge about atmospheric processes that link emissions to deposition with the purpose of describing to the extent possible the consequences of the goal of reduced deposition for emissions. By how much would emissions have to be reduced to reduce the deposition of hydrogen ions by 50 percent in sensitive areas? Conversely, by how much would depositions be reduced if there were specific reductions in emissions? Our committee was organized in January 1982 under the auspices of the board to address this question. The work of the commitee was supported by funds provided by the National Academy of Sciences. We conducted the study by reviewing the current literature and consulting with a number of colleagues who are knowledgeable in one aspect or another of atmospheric science related to acid precipitation. To assure an up-to-date assessment, we did not restrict our review to the literature that had already been published but included where appropriate materials that had been accepted for publication in the peer-reviewed literature although not yet actually published. Although initial drafts of various sections of our report were prepared by individuals, the document was extensively reviewed and revised by the entire committee. The report represents the collective views of the members. The appendixes were prepared by individuals to provide more detailed tech- nical discussions than seemed warranted in the report. We are grateful to our colleagues for their enthusi- astic cooperation when we asked for their data, analyses, and views. In particular, we want to express our thanks to Perry Sampson, who modified his computer model of deposition chemistry at our request. The results are described in Chapter 3. We are also grateful to Paul Altschuller and Rick Linthurst for allowing us to incorporate material into Appendix C that originally was prepared at their request for a Critical Assessment Document on Acidic Deposition (being prepared by them under contract to the U.S. Environmental Protection Agency) and to Bruce Hicks and Jake Hales, who wrote that material. Noor Gillania and D.E. Patterson also graciously permitted John Miller to prepare Appendix B based on work they originally prepared for the Critical Assessment Document. William Stockwell carried out numerous simulations of the complex chemistry of the atmosphere, and Brian Heikes assisted with our analysis x

of observational data. Ginger Caldwell helped in our review of statistical methods of analysis. We also want to thank the members of the NRC staff who assisted in our work. Myron F. Oman, Janis Friedman, Kate Nesbet, and Janet Stoll provided staff support. Editorial assistance was provided by Robert C. Rooney, Jacqueline Boraks, Christine McShane, and Roseanne Price. The manuscript was processed under the capable and patient leadership of Estelle Miller, and the graphics were prepared by the Design and Production Department of the National Academy Press under the direction of James Gormley. Finally, it is a pleasure to acknowledge the enthusiasm, dedication, and cooperation of my colleagues on the committee. They assumed responsibility for a difficult analysis in a highly charged political atmosphere, and they carried out that responsibility with distinction. Jack Calvert, Chairman Committee on Atmospheric Transport and Chemical Transformation in Acid Precipitation xi

Next: Summary »
Acid Deposition: Atmospheric Processes in Eastern North America Get This Book
× 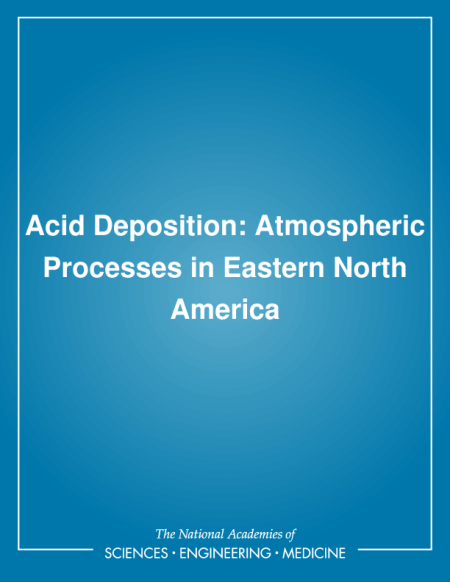