Get This Book
Visit NAP.edu/10766 to get more information about this book, to buy it in print, or to download it as a free PDF.
Page i Share Cite
Suggested Citation:"Front Matter." Institute of Medicine. 2013. Collecting Sexual Orientation and Gender Identity Data in Electronic Health Records: Workshop Summary. Washington, DC: The National Academies Press. doi: 10.17226/18260.
×

Board on the Health of Select Populations

This activity by the National Academy of Sciences was supported in part by the National Institutes of Health under Contract Number HHSN263201200074I, with additional support from The California Endowment under grant number 20121371, and the California HealthCare Foundation, based in Oakland, California, under grant number 17133. The views presented in this publication do not necessarily reflect the views of the organizations or agencies that provided support for this activity.

Copyright 2013 by the National Academy of Sciences. All rights reserved.

The serpent has been a symbol of long life, healing, and knowledge among almost all cultures and religions since the beginning of recorded history. The serpent adopted as a logotype by the Institute of Medicine is a relief carving from ancient Greece, now held by the Staatliche Museen in Berlin.

DANIEL KASPRZYK, Vice President and Director, Center for Excellence in Survey Research, NORC at the University of Chicago, Bethesda, Maryland

FREDERICK (RICK) ERDTMANN, Director, Board on the Health of Select Populations

1 Institute of Medicine planning committees are solely responsible for organizing the workshop, identifying topics, and choosing speakers. The responsibility for the published workshop summary rests with the workshop rapporteurs and the institution.

This workshop summary has been reviewed in draft form by individuals chosen for their diverse perspectives and technical expertise, in accordance with procedures approved by the National Research Council’s Report Review Committee. The purpose of this independent review is to provide candid and critical comments that will assist the institution in making its published workshop summary as sound as possible and to ensure that the workshop summary meets institutional standards for objectivity, evidence, and responsiveness to the study charge. The review comments and draft manuscript remain confidential to protect the integrity of the process. We wish to thank the following individuals for their review of this workshop summary:

Susan Queen, Office of the Assistant Secretary for Planning and Evaluation, Department of Health and Human Services

Although the reviewers listed above have provided many constructive comments and suggestions, they did not see the final draft of the workshop summary before its release. The review of this workshop summary was overseen by Hugh Tilson, University of North Carolina at Chapel Hill. Appointed by the Institute of Medicine, he was responsible

Many individuals were responsible for organizing the workshop and producing this summary. The planning committee would like to thank Institute of Medicine staff members Monica Feit, Jon Sanders, Andrea Cohen, Rick Erdtmann, Hannan Braun, and Colin Fink. Joe Alper, the lead rapporteur, deserves special acknowledgment for writing the first draft of this summary. We also thank the speakers and participants of the workshop who lent their insights to the topic and contributed to the discussions throughout the day. Finally, we thank the sponsors of the workshop: The California Endowment, the California HealthCare Foundation, based in Oakland, California, and the National Institutes of Health. The workshop would not have been possible without their generous support.

The Impact on Quality of Care

Supporting Patients in the Collection of Data

Efforts at the Department of Health and Human Services

The View from the Centers for Medicare & Medicaid Services

Confidentiality, Privacy, and the Health Insurance Portability and Accountability Act

Supporting Providers in the Collection of Data

Sexual Orientation and Gender Identity in the Electronic Health Record: A User and Vendor Perspective

Next: 1 Introduction and Overview »
Collecting Sexual Orientation and Gender Identity Data in Electronic Health Records: Workshop Summary Get This Book
× 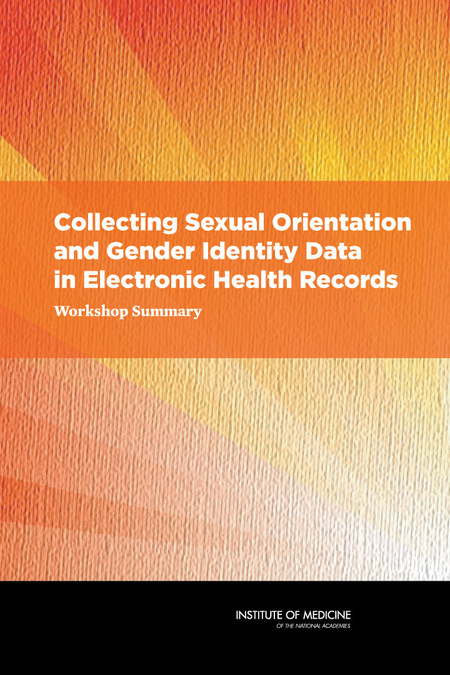 Areas of focus for the workshop include the clinical rationale behind collecting these data, standardized questions that can be used to collect these data, mechanisms for supporting providers and patients in the collection of these data, technical specifications involved in creating standards for sexual orientation and gender identity data collection and exchange, and policy considerations related to the health information technology (HIT) Meaningful Use process being overseen by the Department of Health and Human Services. This report summarizes the workshop agenda, select invited speakers and discussants, and moderate the discussions. Invited participants will include lesbian, gay, bisexual, and transgender (LGBT) health care consumer advocates, providers with experience working with LGBT populations, HIT vendors and other HIT specialists, health care administrators, and policy makers.