Visit NAP.edu/10766 to get more information about this book, to buy it in print, or to download it as a free PDF.
Page i Share Cite
Suggested Citation:"Front Matter." National Research Council. 2013. Improving Self-Escape from Underground Coal Mines. Washington, DC: The National Academies Press. doi: 10.17226/18300.
×

Committee on Mine Safety: Essential Components of Self-Escape Board on Human-Systems Integration Division of Behavioral and Social Sciences and Education

THE NATIONAL ACADEMIES PRESSâ 500 Fifth Street, NWâ Washington, DC 20001 NOTICE: The project that is the subject of this report was approved by the Govern- ing Board of the National Research Council, whose members are drawn from the councils of the National Academy of Sciences, the National Academy of Engineer- ing, and the Institute of Medicine. The members of the committee responsible for the report were chosen for their special competences and with regard for appropri- ate balance. This study was supported by Contract/Grant No. 200-2011-38807 between the National Academy of Sciences and the Centers for Disease Control and Preven- tion. Any opinions, findings, conclusions, or recommendations expressed in this publication are those of the author(s) and do not necessarily reflect the views of the organizations or agencies that provided support for the project. International Standard Book Number-13:â 978-0-309-28276-5 International Standard Book Number-10:â 0-309-28276-4 Additional copies of this report are available from the National Academies Press, 500 Fifth Street, NW, Keck 360, Washington, DC 20001; (800) 624-6242 or (202) 334-3313; http://www.nap.edu. Copyright 2013 by the National Academy of Sciences. All rights reserved. Printed in the United States of America Suggested citation: National Research Council. (2013). Improving Self-Escape from Underground Coal Mines. Committee on Mine Safety: Essential Components of Self-Escape. Board on Human-Systems Integration, Division of Behavioral and Social Sciences and Education. Washington, DC: The National Academies Press.

Acknowledgments T his report is the work of the Committee on Mine Safety: Essential Components of Self-Escape, a project of the National Research Councilâs (NRCâs) Division of Behavioral and Social Sciences and Education, overseen by the Board on Human-Systems Integration. This study was sponsored by the National Institute for Occupational Safety and Health (NIOSH) Office of Mine Safety and Health Research. The committee is grateful for the support and contributions of NIOSH staff, Jeffery Kohler, associate director for mining, and director, Office of Mine Safety and Health Research, National Institute for Occupational Safety and Health, especially for assisting the committee to better understand the coal mine industry, and Marie Chovanec for her able assistance throughout the study process. The committee thanks the numerous individuals for their presenta- tions at the public workshop on April 24, 2012. The workshop included presentations and discussions from five panels. Panel 1, Mine Operator Perspectives, included the following individuals: Richard Abraham, RIO Group, Inc.; Dale Byram, Jim Walter Resources, Inc.; John Gallick, Alpha Natural Resources; and Joseph LaMonica, consultant, Bituminous Coal Operators Association. Panel 2, Training, Decision Making, and Teams, included the following individuals: Dana Brooks, Prince Georgeâs County Maryland Fire/EMS Department, Fire Training Academy instructor; Janis Cannon-Bowers, University of Central Florida; Hendrick Ruck, Human Performance Consulting Group; and Eric Weiss, U.S. Army, George Mason University. Panel 3, Design and Health, included the following individuals: Robert Cohen, Stroger Hospital of Cook County, Illinois, and Sundaresan vii

ACKNOWLEDGMENTS ix Systems Integration who provided oversight and support of the study. Julie Anne Schuck, senior program associate, contributed to all aspects of report preparation including research, editing, and writing. RenÃ©e L. Wilson Gaines, senior project assistant, provided administrative and logistical sup- port throughout the study. Matthew McDonough, research associate, also provided critical substantive and organizational support to the committeeâs public workshop held in April 2012. Anthony Brown, senior program as- sistant, provided additional logistical support for the public workshop. Cherie Chauvin, senior program officer, also assisted in substantive and organizational tasks throughout the study. And finally we thank the execu- tive office reports staff of the Division of Behavioral and Social Sciences and Education, especially Eugenia Grohman, who provided valuable help with the editing and production of the report; Kirsten Sampson Snyder, who managed the report review process and prepublication release; and Yvonne Wise, who managed the production process. Additional research and tech- nical assistance was provided by Matthew Von Hendy, research librarian, and Ellen Reid, summer intern. This report has been reviewed in draft form by individuals chosen for their diverse perspectives and technical expertise, in accordance with pro- cedures approved by the NRCâs Report Review Committee. The purpose of this independent review is to provide candid and critical comments that will assist the institution in making its published report as sound as possible and to ensure that the report meets institutional standards for objectivity, evidence, and responsiveness to the study charge. The review comments and draft manuscript remain confidential to protect the integrity of the deliberative process. We wish to thank the following individuals for their review of this report: Winston âWinkâ Bennett, Human Performance Wing, Human Effectiveness Directorate, Wright Patterson Air Force Base; Jim Brinkley, Occupational Health and Safety, International Association of Fire Fighters, Washington, DC; Dale Byram, Safety Efforts, Walter Energy, Inc., Birmingham, Alabama; Elaine T. Cullen, Prima Consulting Services, Chattaroy, Washington; Sara J. Czaja, Department of Psychiatry and Be- havioral Sciences Scientific and Center on Aging, University of Miami Miller School of Medicine; Dave Feickert, consultant, Whanganui, New Zealand; Sundaresan Jayaraman, School of Materials Science and Engineer- ing, Georgia Institute of Technology; Syd S. Peng, Mining Engineering, West Virginia University; Eduardo Salas, Department of Psychology and Institute for Simulation and Training, University of Central Florida; and Stanley C. Suboleski, Evan Energy Investments, Richmond, Virginia. Although the reviewers listed above provided many constructive com- ments and suggestions, they were not asked to endorse the content of the report nor did they see the final draft of the report before its release.

x ACKNOWLEDGMENTS The review of this report was overseen by Matthew Rizzo, Departments of Neurology and Mechanical and Industrial Engineering, and the Public Policy Center, University of Iowa, as coordinator, and Georges S. Benjamin, American Public Health Association, Washington, DC, as review monitor. Appointed by the NRC, they were responsible for making certain that an independent examination of this report was carried out in accordance with institutional procedures and that all review comments were carefully con- sidered. Responsibility for the final content of this report rests entirely with the author and the institution. William S. Marras, Chair Toby Warden, Study Director Committee on Mine Safety: Essential Components of Self-Escape

Next: Summary »
Improving Self-Escape from Underground Coal Mines Get This Book
× 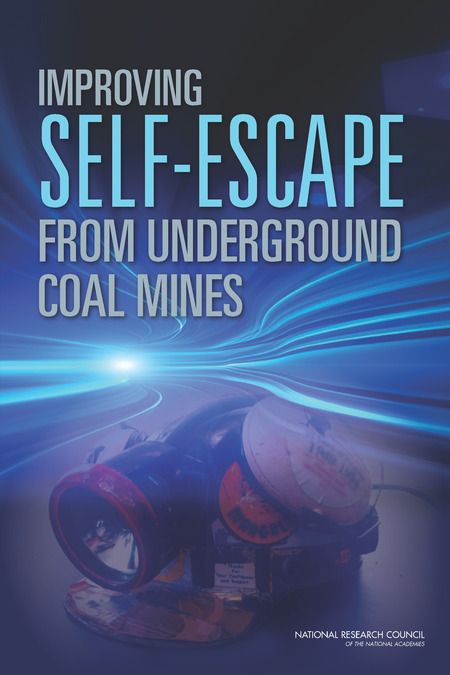 Coal mine disasters in the United States are relatively rare events; many of the roughly 50,000 miners underground will never have to evacuate a mine in an emergency during their careers. However, for those that do, the consequences have the potential to be devastating. U.S. mine safety practices have received increased attention in recent years because of the highly publicized coal mine disasters in 2006 and 2010. Investigations have centered on understanding both how to prevent or mitigate emergencies and what capabilities are needed by miners to self-escape to a place of safety successfully. This report focuses on the latter - the preparations for self-escape.

In the wake of 2006 disasters, the U.S. Congress passed the Mine Improvement

and New Emergency Response Act of 2006 (MINER Act), which was designed to strengthen existing mine safety regulations and set forth new measures aimed at improving accident preparedness and emergency response in underground coal mines. Since that time, the efforts of the National Institute of Occupational Safety and Health (NIOSH) and the Mine Safety and Health Administration (MSHA) have contributed to safety improvements in the mining industry. However, the Upper Big Branch mine explosion in 2010 served as a reminder to remain ever vigilant on improving the prevention of mine disasters and preparations to help miners survive in the event of emergencies.

This study was set in the context of human-systems integration (HSI), a systems approach that examines the interaction of people, tasks, and equipment and technology in the pursuit of a goal. It recognizes this interaction occurs within, and is influenced by, the broader environmental context. A key premise of human-systems integration is that much important information is lost when the various tasks within a system are considered individually or in isolation rather than in interaction with the whole system. Improving Self-Escape from Underground Coal Mines, the task of self-escape is part of the mine safety system.