Sports-Related Concussions in Youth: Improving the Science, Changing the Culture (2014)

Get This Book
Visit NAP.edu/10766 to get more information about this book, to buy it in print, or to download it as a free PDF.
« Previous: 6 Protection and Prevention Strategies
Page 285 Share Cite
Suggested Citation:"7 Conclusions and Recommendations." Institute of Medicine and National Research Council. 2014. Sports-Related Concussions in Youth: Improving the Science, Changing the Culture. Washington, DC: The National Academies Press. doi: 10.17226/18377.
×

of legislation and other interventions in reducing the incidence of sports-related concussions in youth.

Recommendation 1. The Centers for Disease Control and Prevention, taking account of existing surveillance systems and relevant federal data collection efforts, should establish and oversee a national surveillance system to accurately determine the incidence of sports-related concussions, including those in youth ages 5 to 21. The surveillance data collected should include, but not be limited to, demographic information (e.g., age, sex, race and ethnicity), preexisting conditions (e.g., attention deficit hyperactivity disorder, learning disabilities), concussion history (number and dates of prior concussions), the use of protective equipment and impact monitoring devices, and the qualifications of personnel making the concussion diagnosis. Data on the cause, nature, and extent of the concussive injury also should be collected, including

other appropriately designed studies on the management of concussion and on post-concussion syndrome in youth are needed in order to develop empirically based clinical guidelines, including studies to determine the efficacy of physical and cognitive rest following concussion, the optimal period of rest, and the best protocol for returning individuals to full physical activity as well as to inform the development of evidence-based protocols and appropriate accommodations for students returning to school. Prospective studies to delineate individual differences in concussion symptomatology and course as well as the predictors of recovery and persistence in children and adolescents with sports-related concussions are also needed in order to identify individuals who are likely to have persistent symptoms and therefore to be in need of intervention.

Recommendation 2. The National Institutes of Health and the Department of Defense should support research to (1) establish objective, sensitive, and specific metrics and markers of concussion diagnosis, prognosis, and recovery in youth and (2) inform the creation of age-specific, evidence-based guidelines for the management of short- and long-term sequelae of concussion in youth.

SHORT- AND LONG-TERM CONSEQUENCES OF CONCUSSIONS AND REPETITIVE HEAD IMPACTS

and the early detection of neurodegeneration in athletes that may be related to repetitive head impacts and multiple concussions.

Recommendation 3. The National Institutes of Health and the Department of Defense should conduct controlled, longitudinal, large-scale studies to assess the short- and long-term cognitive, emotional, behavioral, neurobiological, and neuropathological consequences of concussions and repetitive head impacts over the life span. Assessments should also include an examination of the effects of concussions and repetitive head impacts on quality of life and activities of daily living. It is critical that such studies identify predictors and modifiers of outcomes, including the influence of socioeconomic status, race and ethnicity, sex, and comorbidities. To aid this research, the National Institutes of Health should maintain a national brain tissue and biological sample repository to collect, archive, and distribute material for research on concussions.

Recommendation 4. The National Collegiate Athletic Association, in conjunction with the National Federation of State High School Associations, national governing bodies for youth sports, and youth sport organizations, should undertake a rigorous scientific evaluation of the effectiveness of age-appropriate techniques, rules, and playing and practice standards in reducing sports-related concussions and sequelae.

The Department of Defense should conduct equivalent research for sports and physical training, including combatives, at military service academies and for military personnel.

Recommendation 5. The National Institutes of Health and the Department of Defense should fund research on age- and sex-related biomechanical determinants of injury risk for concussion in youth, including how injury thresholds are modified by the number of and time interval between head impacts and concussions. These data are critical for informing the development of rules of play, effective protective equipment and equipment safety standards, impact-monitoring systems, and athletic and military training programs.

that they may play through a concussion to avoid letting down their teammates, coaches, schools, and parents. Given the serious nature of concussions and the potential for additional injury during recovery, it is important to foster a culture of acceptance that encourages the reporting of concussive injury and compliance with appropriate concussion management plans, including restrictions aimed at preventing athletes from returning to play before being fully recovered.

Recommendation 6. The National Collegiate Athletic Association and the National Federation of State High School Associations, in conjunction with the Centers for Disease Control and Prevention, the Health Resources and Services Administration, the National Athletic Trainers’ Association, and the Department of Education, should develop, implement, and evaluate the effectiveness of large-scale efforts to increase knowledge about concussions and change the culture (social norms, attitudes, and behaviors) surrounding concussions among elementary school through college-age youth and their parents, coaches, sports officials, educators, athletic trainers, and health care professionals. These efforts should take into account demographic variations (e.g., socioeconomic status, race and ethnicity, and age) across population groups. The Department of Defense should conduct equivalent research for military personnel and their families.

Next: Appendix A: Public Workshop Agendas »
Sports-Related Concussions in Youth: Improving the Science, Changing the Culture Get This Book
× 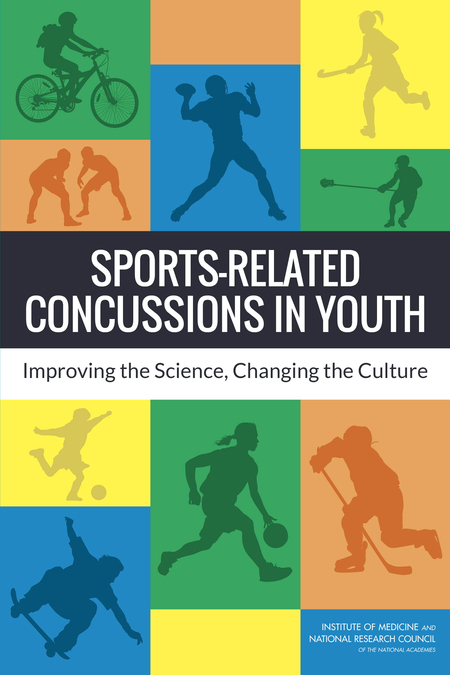 In the past decade, few subjects at the intersection of medicine and sports have generated as much public interest as sports-related concussions - especially among youth. Despite growing awareness of sports-related concussions and campaigns to educate athletes, coaches, physicians, and parents of young athletes about concussion recognition and management, confusion and controversy persist in many areas. Currently, diagnosis is based primarily on the symptoms reported by the individual rather than on objective diagnostic markers, and there is little empirical evidence for the optimal degree and duration of physical rest needed to promote recovery or the best timing and approach for returning to full physical activity.

Sports-Related Concussions in Youth: Improving the Science, Changing the Culture reviews the science of sports-related concussions in youth from elementary school through young adulthood, as well as in military personnel and their dependents. This report recommends actions that can be taken by a range of audiences - including research funding agencies, legislatures, state and school superintendents and athletic directors, military organizations, and equipment manufacturers, as well as youth who participate in sports and their parents - to improve what is known about concussions and to reduce their occurrence. Sports-Related Concussions in Youth finds that while some studies provide useful information, much remains unknown about the extent of concussions in youth; how to diagnose, manage, and prevent concussions; and the short- and long-term consequences of concussions as well as repetitive head impacts that do not result in concussion symptoms.

The culture of sports negatively influences athletes' self-reporting of concussion symptoms and their adherence to return-to-play guidance. Athletes, their teammates, and, in some cases, coaches and parents may not fully appreciate the health threats posed by concussions. Similarly, military recruits are immersed in a culture that includes devotion to duty and service before self, and the critical nature of concussions may often go unheeded. According to Sports-Related Concussions in Youth, if the youth sports community can adopt the belief that concussions are serious injuries and emphasize care for players with concussions until they are fully recovered, then the culture in which these athletes perform and compete will become much safer. Improving understanding of the extent, causes, effects, and prevention of sports-related concussions is vitally important for the health and well-being of youth athletes. The findings and recommendations in this report set a direction for research to reach this goal.