Get This Book
Visit NAP.edu/10766 to get more information about this book, to buy it in print, or to download it as a free PDF.
« Previous: II.4 A Patient Perspective--Barbara L. Kornblau
Page 96 Share Cite
Suggested Citation:"II.5 The Case for Integrating Health, Well-Being, and Self-Care into Health Professional Education--Mary Jo Kreitzer and Elizabeth Goldblatt." Institute of Medicine. 2014. Establishing Transdisciplinary Professionalism for Improving Health Outcomes: Workshop Summary. Washington, DC: The National Academies Press. doi: 10.17226/18398.
×

II.5 THE CASE FOR INTEGRATING HEALTH, WELL-BEING, AND SELF-CARE INTO HEALTH PROFESSIONAL EDUCATION

Historically, the emphasis in health professional education has largely mirrored the focus of the health care system and the perceived needs of society—the diagnosis and treatment of disease and disability. Physicians, nurses, physical therapists, mental health care providers, and the other allopathic practitioners have been educated within their disciplines with minimal to no interaction with other professions. Historically, they have been educated to function in a hierarchical system in which the patient is expected to be a passive recipient of care. Although the five licensed complementary and alternative medicine (CAM) fields (chiropractic, acupuncture, naturopathic medicine, direct-entry midwifery, and massage therapy) are not as hierarchical as conventional medicine and more often approach patients as partners in healing, they too have been mostly educated in silos. Although much of the education and training in conventional medicine occur within hospitals in the United States, the licensed CAM fields are educated primarily in outpatient clinics. This differs from countries such as China where acupuncture and Traditional Chinese Medicine (TCM) providers are trained in TCM hospitals.

Within the allopathic health community, although nursing has had more of a whole-person focus than some of the other disciplines, and principles of community and public health have been integrated into medical, nursing, and other health professions curricula, the overwhelming focus has been on disease and the acquisition of technical knowledge and skill. Health promotion, disease prevention, well-being, and the importance of self-care have been largely absent. With a few exceptions, although institutions educating professionals in integrative health disciplines, which include the five CAM fields and some conventional medicine practitioners, have had significantly more focus on the whole person and on health and wellness, self-care continues to be absent from or minimal in their curricula as well.

Impact of Stress on Health Professional and Patient Outcomes

Overall, within the health care fields, the lack of emphasis on self-care contributes to health professionals unprepared for the rigors and stress of practice. Burnout, a response to stress characterized by emotional exhaustion, depersonalization, and a diminished sense of personal accomplishment (Maslach and Jackson, 1982), is rising. According to a recently-published national survey of physicians (Shanafelt et al., 2012), almost half of medical doctors (45.8 percent) reported at least one symptom of burnout, a significantly higher rate than among the general working population. Physicians in frontline care such as emergency medicine, general internal medicine, and family medicine reported burnout levels near 60 percent. Studies have frequently reported moderate to high levels of burnout among nurses (Oehler and Davidson, 1992). In a large national study, more than 40 percent of hospital staff nurses scored in the high range for job-related burnout, and more than 1 in 5 nurses reported that they intend to leave their hospital jobs within 1 year (Aiken et al., 2001). In addition to the detrimental impact of burnout on health professionals and the costs associated with illness, lost productivity, dissatisfaction, turnover, and premature exit from the profession, burnout also has an adverse impact on patient care. Williams et al. (2007) found that stressed, burned out, and dissatisfied physicians report a greater likelihood of making errors and more frequent instances of suboptimal care. In a recent study linking hospital infection rates and nurse staffing and burnout, Cimiotti et al. (2012) reported that hospitals in which burnout was reduced by 30 percent had a total of 6,239 fewer infections, for an annual cost savings of up to $68 million. Although the published literature is scant in documenting the incidence of burnout among integrative health care providers, anecdotal evidence suggests that the phenomenon of burnout is endemic among all health professions.

Well-being is not a new concept, but it has been overshadowed by the focus in many health care systems around the world on disease and pathogenesis (factors that cause disease). In 1946, the World Health Organization defined health as a state of complete physical, mental, and social well-being—not merely as the absence of disease or infirmity. More than 30 years ago, Aaron Antonovsky (1987), a professor of sociology, coined the term “salutogenesis” to describe an approach that focuses on factors that support human health and well-being, rather than on factors that cause disease. Although pathogenesis rather than salutogenesis has dominated conventional medicine, it is interesting to note that indigenous healing tra-

ditions throughout the world have always focused on well-being and health as well as on the diagnosis and treatment of disease.

Well-being has been the object of study in a broad array of disciplines. Psychology, sociology, public health, and economics have all spawned a variety of theories about the nature of well-being and how to measure it, as well as a long list of possible contributing factors. The Gallup organization (Rath, 2010) has identified five elements of well-being—career, social, financial, physical, and community—that appear to be universal across faiths, cultures, and nationalities. Rath reports that although 66 percent of people are doing well in at least one of these areas, only 7 percent are thriving in all five.

Martin Seligman, father of the positive psychology movement and author of Flourish (2011) writes that his goal was to shift the focus of psychology from trying to relieve misery to understanding well-being. He describes well-being as an active state of exploring what makes life worth living and then building the enabling conditions of such a life. According to Seligman, there is no single measure that captures well-being; rather, there are a number of elements that contribute to it, and the gold standard for measuring well-being is flourishing.

In educating the next generation of health care providers and designing new systems of education and care, a fundamental shift is required that goes well beyond shifting from disease to health or from illness to wellness (Kreitzer, 2012). A shift to a focus on well-being would represent a transformative societal change that would touch every aspect of people’s lives and the communities in which they live. As noted in Figure II-5, well-being is impacted by a number of interrelated factors that contribute to flourishing, including

Teaching health professional students from a well-being perspective would reframe their role as one of supporting and maximizing human and system capacity and potential, whether they are diagnosing and treating disease or focusing on ways to promote salutogenesis. A curriculum that focuses on self-care and uses well-being as a lens could be an innovative strategy both for teaching content on well-being and self-care and for pre- 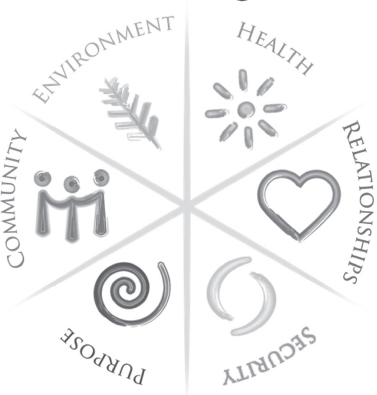 In a recent Wall Street Journal article titled “The Simple Idea That Is Transforming Health Care,” Landro (2013) articulates the benefits derived from a perspective that focuses on well-being and quality of life rather than on disease alone, noting that numerous studies show that when people have a greater sense of well-being, they have fewer hospitalizations and emergency room visits, miss fewer days of work, and use less medication. They are also more productive at work and more engaged in the community. Simply put, well-being is critically important in motivating people to make changes in their lives to improve the way they feel and function.

identified that focus on areas such as values and ethics for interprofessional practice, roles and responsibilities, interprofessional communication, and teams and teamwork. Self-care is not implicitly or explicitly identified as a core competency. Content on self-care is being offered in elective formats, often as mind/body skills training or as part of a popular course in medical school called The Healer’s Art. The issue of stress, burnout, and lack of self-care is such a profound problem, however, that groups such as the AMA are including resources on their website that focus on physician health and resilience.10

Parallel to the efforts of the Interprofessional Education Collaborative (IPEC), which produced the competencies noted above, the Academic Consortium for Complementary and Alternative Health Care, which represents the five licensed CAM fields, engaged in a process of identifying core competencies for practicing in an integrated health care environment (ACCAHC, 2011). In addition to endorsing the competencies developed by IPEC, several competencies were added, including the ability to demonstrate personal behaviors and self-care practices that reflect optimal health and wellness.

Adding required curricula on health, well-being, and self-care at every level of health professional education would be a bold and transformative innovation that could both improve the health and well-being of care providers and better prepare them to focus on these issues as they care for patients. A well-being curriculum could focus on topics such as

Although it is challenging to imagine overcoming institutional and logistical barriers, it would be ideal if content promoting a well-being approach could be taught in an interprofessional context that would promote team-based care and collaborative practice. 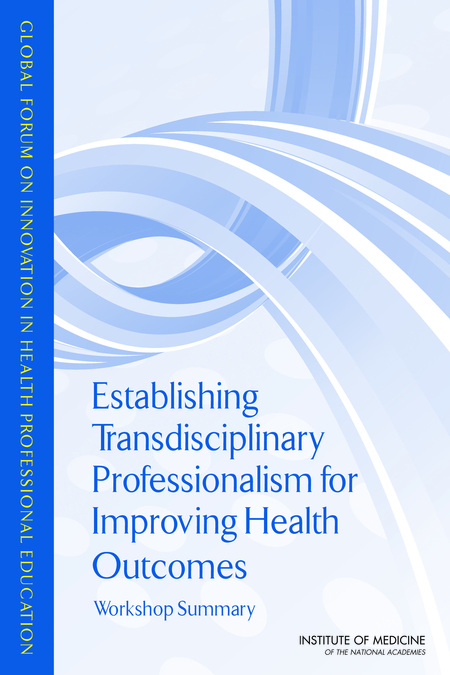 Establishing Transdisciplinary Professionalism for Improving Health Outcomes is a summary of a workshop convened by the Institute of Medicine Global Forum on Innovation in Health Professional Education to explore the possibility of whether different professions can come together and whether a dialogue with society on professionalism is possible. Most of the 59 members making up the Global Forum were present at the workshop and engaged with outside participants in active dialogue around issues related to professionalism and how the different professions might work effectively together and with society in creating a social contract. The structure of the workshop involved large plenary discussions, facilitated table conversations, and small-group breakout sessions. In this way, the members - representing multiple sectors, countries, health professions, and educational associations - had numerous opportunities to share their own perspectives on transdisciplinary professionalism as well as hear the opinions of subject matter experts and the general public.