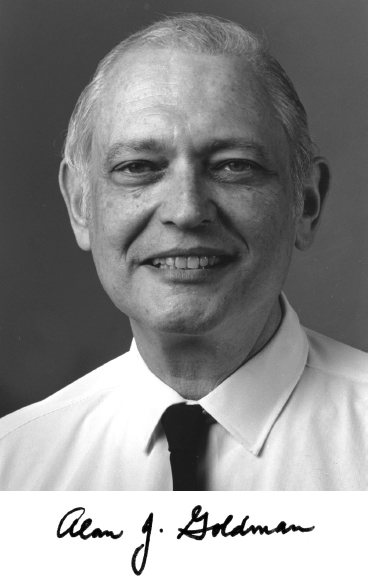 “For significant contributions to and outstanding leadership of public sector operations research and transportation science.”

BY DANIEL Q. NAIMAN AND CHRISTOFF WITZGALL
SUBMITTED BY THE NAE HOME SECRETARY

ALAN J. GOLDMAN, emeritus professor at Johns Hopkins University’s Department of Applied Mathematics and Statistics, died on February 13, 2010, at the age of 77.

Alan grew up in Brooklyn, New York, a short walk from Coney Island, as the only child of Leonard and Sylvia Goldman, both of whom worked for the New York City Public Schools. As a student at the local Abraham Lincoln High School he showed an interest in a wide variety of activities, including competing for the school’s Chess Club and Math Team and playing basketball and handball. In 1947 he won first prize in the American Accordionist Association’s Junior Soloist contest. He graduated first in his class, and his talents led to scholarships and his being one of the winners in the 1949 Westinghouse Science Talent Search.

Alan enrolled as a graduate student in mathematics at Princeton, a department with great strengths in topology, algebra, and logic. Contrasting with these pure mathematical areas were active research groups in applied mathematics,

including work on nonlinear differential equations led by Solomon Lefschetz and the Logistics Project directed by Albert Tucker. Tucker ran a weekly seminar in game theory, linear programming, and combinatorial optimization, and Goldman’s active participation profoundly shaped his career. While writing his PhD thesis on a subject in algebraic topology under the direction of Ralph Fox, Goldman contributed three seminal papers to Annals of Mathematics Study 38, which was edited by Harold Kuhn and Albert Tucker.

Goldman’s appreciation of the contributions of the Princeton group to the areas of game theory, mathematical programming, and combinatorial optimization is eloquently expressed in a citation he authored for the award of the von Neumann Theory Prize to David Gale, Harold Kuhn, and Albert Tucker in 1980. In it he points out their profound influence on himself and others, and expresses his gratitude to Albert Tucker for his leadership: “[N]ot only did he involve the mathematical community from the very beginning, but he organized the research efforts and set standards for rigor and clarity of exposition that have been a source of inspiration to all.”

Acting on his deep commitment to mathematical application, Alan joined the National Bureau of Standards (NBS, now the National Institute of Standards and Technology, NIST) in Washington, DC, an agency dedicated to the pursuit of the “hard” sciences and their metrology. He became part of the Mathematics Division, which in the wake of electronic computing had become a major player in the development of numerical analysis.

Alan brought with him to NBS a different vision: to address and distill the mathematical problems that surface when planning and strategizing the activity of administration and corporate management. In 1956, he was tapped to establish and lead an Operations Research Section in the Mathematics Division. Always forward-looking, he steered his new team toward geometric and combinatorial optimization.

While promoting basic research, Alan reached out to a host of government agencies and actively participated in resulting

collaborations. The US Postal Service was one of the first agencies with which he collaborated in work to determine suitable locations for post offices; this work sparked Alan’s longtime fascination with problems of optimal facility location. The many aspects of transportation were another considerable source of collaborations. He played a key role in planning and demand-forecasting for intercity and urban transportation systems. The list of applications Alan and his NBS team investigated and wrote about is vast and includes antimissile defense, mail sorting and distribution systems, runway capacity, impact and viability of new aircraft, network viability, lead paint poisoning, pesticide propagation, arms control modeling, and fire department operations.

Alan earned high accolades from those who worked under his tutelage. He was always fully invested in their efforts without resorting to micromanaging. Throughout his career he was well known for his voracious appetite for new ideas, his keen ability to recognize promising directions, and his ability to nurture talented people. Several individuals that he hired or mentored at NBS went on to distinguished academic careers: Jack Edmonds, who won a von Neumann Theory Prize in 1985; Karla Hoffman, winner of the 2005 Kimball Medal; and George Nemhauser, who was elected to the National Academy of Engineering in 1986.

For his leadership and his far-reaching research, Alan was awarded the Gold Medal for Excellence in Service by the US Department of Commerce in 1976. Alan Hoffman, who hired Goldman at NBS, wrote, “To say that Alan was an outstanding leader would be insufficient. I have told many people that hiring Alan was probably my biggest contribution to the organization.”

At Johns Hopkins Alan continued to exhibit an unparalleled passion for mathematical theory and application, inspiring a new generation of faculty and students in the process. His ability to quickly grasp the main ideas in the work of others—whether in manuscripts, PhD dissertations, or seminar presentations—was viewed by faculty and graduate students as nothing short of uncanny.

Alan’s dedication was unmatched. Throughout his time at Johns Hopkins he could be found working in his office late into the evening and on weekends. He supervised 13 PhD dissertations, served as a referee for countless submitted papers, and provided feedback to many of his colleagues on their work. Writers of manuscripts subjected to his scrutiny could expect copious pages of detailed comments across a whole spectrum of points of view, from deep issues related to content to matters of style. Yet his approach was always positive and encouraging. Alan’s own publication list would surely be orders of magnitude longer had he not been so generous. As an emeritus professor he continued to supervise the research projects of graduate students and to develop and teach new courses in operations research, such as “Math in Sports” and “Supply Chain Management.” Students with serious academic aspirations benefited enormously from the unfailing care he put into his efforts as teacher and mentor.

Alan’s death resulted in a huge outpouring of comments from the many colleagues and students whose lives had been deeply touched by him, and from these comments familiar themes emerge. Alan was passionate and caring and eager to be exposed to new ideas; his intellectual generosity was unmatched. Alan was a true optimizer, striving to do things as close to perfectly as possible; and in so doing, he brought out the best in everyone around him. He is deeply missed by his colleagues.

Next: NICHOLAS J. GRANT »
Memorial Tributes: Volume 17 Get This Book
× 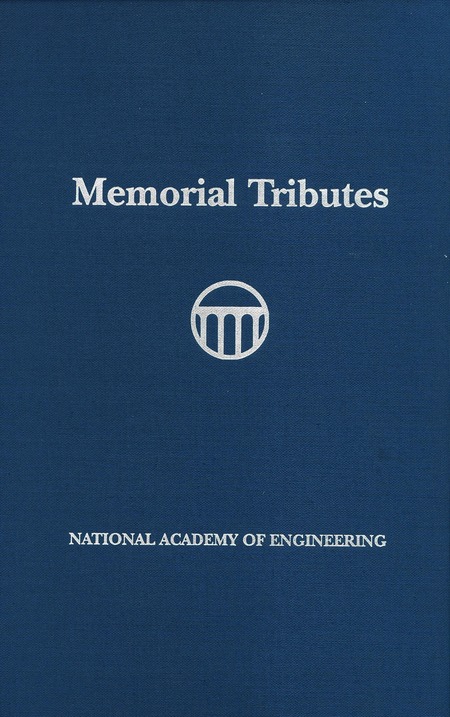 This is the 17th Volume in the series Memorial Tributes compiled by the National Academy of Engineering as a personal remembrance of the lives and outstanding achievements of its members and foreign associates. These volumes are intended to stand as an enduring record of the many contributions of engineers and engineering to the benefit of humankind. In most cases, the authors of the tributes are contemporaries or colleagues who had personal knowledge of the interests and the engineering accomplishments of the deceased. Through its members and foreign associates, the Academy carries out the responsibilities for which it was established in 1964.