The Science of Science Communication II: Summary of a Colloquium (2014)

Get This Book
Visit NAP.edu/10766 to get more information about this book, to buy it in print, or to download it as a free PDF.
« Previous: References
Page 105 Share Cite
Suggested Citation:"Appendix A: Agenda." National Academy of Sciences. 2014. The Science of Science Communication II: Summary of a Colloquium. Washington, DC: The National Academies Press. doi: 10.17226/18478.
×

The Sciences of Communication

Science in a Time of Controversy

Next: Appendix B: Speakers »
The Science of Science Communication II: Summary of a Colloquium Get This Book
× 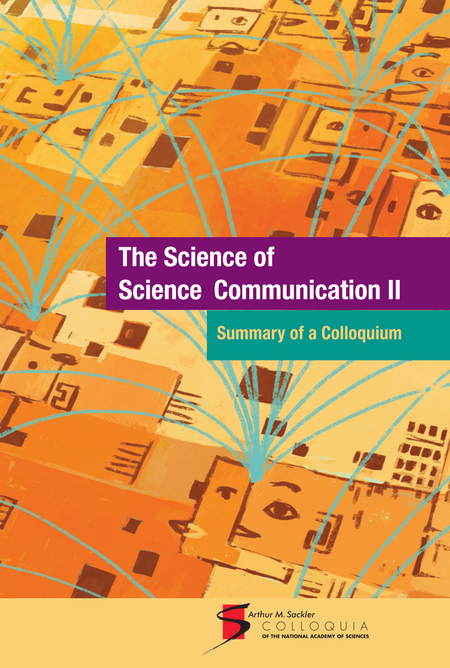 Successful scientists must be effective communicators within their professions. Without those skills, they could not write papers and funding proposals, give talks and field questions, or teach classes and mentor students. However, communicating with audiences outside their profession - people who may not share scientists' interests, technical background, cultural assumptions, and modes of expression - presents different challenges and requires additional skills. Communication about science in political or social settings differs from discourse within a scientific discipline. Not only are scientists just one of many stakeholders vying for access to the public agenda, but the political debates surrounding science and its applications may sometimes confront scientists with unfamiliar and uncomfortable discussions involving religious values, partisan interests, and even the trustworthiness of science.

The Science of Science Communication II is the summary of a Sackler Colloquium convened in September 2013 At this event, leading social, behavioral, and decision scientists, other scientists, and communication practitioners shared current research that can improve the communication of science to lay audiences. In the Sackler Colloquia tradition, the meeting also allowed social and natural scientists to identify new opportunities to collaborate and advance their own research, while improving public engagement with science. Speakers provided evidence-based guidance on how to listen to others so as to identify their information needs, ways of thinking about the world, and the cultural stereotypes regarding scientists. They delved deeply into the incentive systems that shape what scientists study and how they report their work, the subtle changes in framing that can influence how messages are interpreted, the complex channels that determine how messages flow, and the potential politicization of scientific evidence.