Visit NAP.edu/10766 to get more information about this book, to buy it in print, or to download it as a free PDF.
Page i Share Cite
Suggested Citation:"Front Matter." National Research Council. 1982. Carbon Dioxide and Climate: A Second Assessment. Washington, DC: The National Academies Press. doi: 10.17226/18524.
×

Foreword As residents of this most pleasant planet, we must necessarily be concerned about any changes in its heating and ventilation systems. One possibly significant change has been unequivocally observed over the past two decades: the amount of carbon dioxide in the air has increased. Moreover, it seems almost certain that we are primarily to blame. By burning fossil fuels and converting the carbon-rich natural landscape into farmland and cities, we transfer carbon to the atmosphere. Since carbon dioxide absorbs and emits thermal radiation and is an essential nutrient for plants, there is good reason to suspect that increases in its abundance may affect the climate of the globe and the workings of the biological systems that support our life. As we plan ways of meeting our energy needs from fossil fuel and al- ternative sources, it is thus prudent to consider the implications for atmospheric carbon dioxide, climate, agriculture, the natural biosphere, and indeed for our increasingly interdependent global society. In framing the Energy Security Act of 1980, the Congress requested the Office of Science and Technology Policy and the National Academy of Sciences to conduct a comprehensive assessment of the implications of increasing carbon dioxide due to fossil fuel use and other human activities. The Climate Board of the National Research Council was asked to assume responsibility for the study, and the Carbon Dioxide Assessment Committee was formed under the board's aegis. Our assessment will deal with many questions relating to this complex issue: What amounts of fossil fuel are likely to be burned? How much carbon dioxide may remain in the air? What may be the effects on agriculture? How may these changes interact with other changes in a rapidly evolving world? xv

xvi Foreword At this writing, work is under way on these and other elements that will be integrated into our report. It was evident, however, that one aspect of the carbon dioxide issue merited early attention. The influence of higher levels of atmospheric carbon dioxide on climate was assessed in 1979 by a panel chaired by the late Me G. Charney. Since then, much work has been done, and some questions have been raised. An updated assessment of the relationship between carbon dioxide and climate was clearly in order, and Joseph Smagorinsky, Director of the Geophysical Fluid Dynamics Laboratory of the National Oceanic and Atmospheric Administration, was requested to lead a panel to address this task. This is the panel's report. It will contribute to the assessment to be prepared by the Carbon Dioxide Assessment Committee, but it also stands in its own right as a significant addition to our understanding of this complex and worrisome issue. I believe that it should also serve as a continuing reminder of the genius and wisdom of Me G. Charney, who illuminated this question as he did so many other problems of science and mankind. William A. Nierenberg, Chairman Carbon Dioxide Assessment Committee

Preface In the summer of 1979, the Director of the Office of Science and Technology Policy (OSTP) requested the President of the National Academy of Sciences to conduct a special study to assess the then current state of knowledge regarding the possible effects of increased atmospheric carbon dioxide (CO2) on climate. A committee under the chairmanship of the late Jule G. Charney was formed and produced a report (Climate Research Board, 1979), hereafter referred to as the Charney report. In the intervening years, the National Research Council (NRC) formed the Carbon Dioxide Assessment Committee under its Climate Board (formerly the Climate Research Board). The committee's responsibility to the OSTP, at the request of the Congress, is to provide an overview of the entire CO2 question. In this pursuit, the Carbon Dioxide Assessment Committee has asked the Climate Research Committee of the Climate Board (CB) and the Committee on Atmospheric Sciences (CAS) to bring up to date the Charney report, while essentially retaining the focus confined to the CO2-climate connection. The timeliness of such an update stems from the accelerated research activity on the many facets of the problem stimulated by vigorous national and international public attention. The subjects covered in the present report, therefore, generally coincide with those in the 1979 report, but some new considerations have been included, reflecting a broadened base of understanding of the problem. Examples are the role of aerosols, the development of climate scenarios, and some issues relating to development of a monitoring strategy for early detection. The present ad hoc CO2/Climate Review Panel, including invited experts, was established by the joint CB/CAS Climate Research Committee. Three xvii

xviii Preface meetings of the panel were held in March, April, and July 1981. The last of these took place at the National Center for Atmospheric Research, and we appreciate greatly the center's hospitality and the opportunity for discussions with its expert research staff. Staff support for the panel's work was provided by Robert S. Chen and John S. Perry of the CB staff, and Doris Bouadjemi and Sally Larisch speedily processed innumerable corrections and interim drafts. The panel is most grateful for the contributions of the invited experts who assisted in its work and are cited in the list of its members. In particular, V. Ramanathan and Stephen H. Schneider made major contributions to the discussion of energy-balance models. The panel's draft report was reviewed by members of the original Charney panel, other experts, the panel's parent committees, and the NRC'S Report Review Committee. The report discusses at length two recent studies that have concluded that the effect of increased CO2 on surface temperatures will be much less than estimated by the majority of the scientific community. The panel believes that these studies are flawed and incomplete, and the report attempts to identify clearly their deficiencies. The authors of the dissenting studies were provided with an opportunity to review the panel's report but remain unconvinced. Ultimately, of course, nature will reveal to us all the truth. The panel believes that, with the rapid rate of development of some of the scientific foundations on which firmer conclusions can be drawn, the problem will warrant periodic reassessments. Joseph Smagorinsky, Chairman COi/Climate Review Panel

Next: SUMMARY OF CONCLUSIONS AND RECOMMENDATIONS »
Carbon Dioxide and Climate: A Second Assessment Get This Book
× 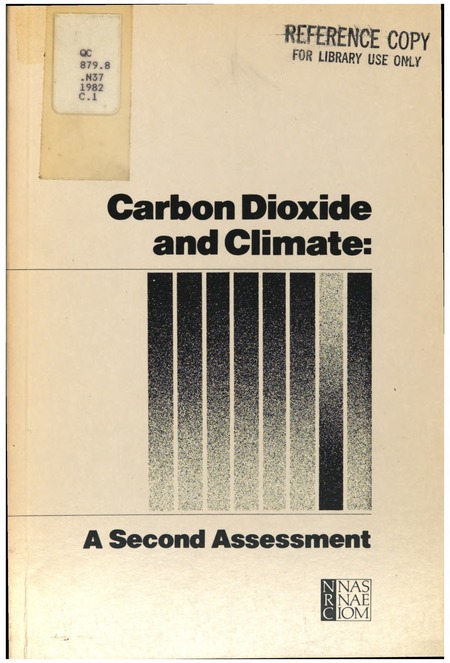