Chapter:8 Bringing the Pieces Together

Get This Book
Visit NAP.edu/10766 to get more information about this book, to buy it in print, or to download it as a free PDF.
« Previous: 7 Upgrading Food and Physical Activity Options Before, During, and After School in Low-Income Neighborhoods
Page 81 Share Cite
Suggested Citation:"8 Bringing the Pieces Together." Institute of Medicine. 2013. Creating Equal Opportunities for a Healthy Weight: Workshop Summary. Washington, DC: The National Academies Press. doi: 10.17226/18553.
×

Bringing the Pieces Together

Important Points Made by Speakers

•     Because of the complexity of the systems involved in people’s eating and physical activity, no single initiative is likely to be sufficient to prevent obesity. (Hammond)

•     The multiple actions that need to be taken must be coordinated to work together as effectively as possible. (Hammond)

A prominent theme of Accelerating Progress in Obesity Prevention is a systems perspective. The report observes that “an impressive body of evidence confirms that the drivers of the [obesity] epidemic involve interactions among several complex, ever-changing systems, including the food system, transportation systems, community infrastructure, school systems, health care systems, and the intricate behavioral and physiological systems that influence individual physical activity and eating behaviors and body weight” (IOM, 2012a, p. 21). Making changes in such a complex system requires a systems approach that focuses “on the whole picture and not just a single element, awareness of the wider context of any action, and an appreciation for interactions among different components of the problem” (IOM, 2012a, p. 21). The final speaker at the workshop—Ross Hammond, senior fellow in economic studies at the Brookings Institution—considered the implications of such a systems approach for creating equal opportunities for a healthy weight. A systems approach is more difficult to pursue than a more piecemeal effort because of the difficulties entailed in understanding and changing systems, but it also offers the prospect of much greater effectiveness.

Obesity is both simple and complex, Hammond began. It results from a simple imbalance between the energy embodied in the substances a person consumes and the energy that person expends. Yet energy balance, in turn, depends on the interactions of a long list of factors at many different levels, including individual decisions, marketing, the physical environment, and public policies. Obesity also potentially involves many different actors, including families, schools, retailers, the media, city planners, employers, and insurance companies, each of which has different incentives and goals. Finally, each individual and group affected by obesity is different and experiences highly varied circumstances.

One implication of this complexity is that the standard scientific tool set may have limited ability to capture the dynamics of the overall system in which the obesity epidemic is embedded. No one can hold all aspects of such a complex system in mind at the same time. As a result, mental models and intuitions about how an action might affect the system can be misleading, and no single solution will fit all circumstances and contexts.

To address equity issues, policies need to be broad enough to influence the overall system while being tailored to meet the needs of specific subpopulations, Hammond said. Yet, the complexity of the system is likely to result in unanticipated consequences of policy decisions.

Systems approaches have been generating great interest in public health over the past decade, Hammond stated. At the most fundamental level, a systems approach means taking the interactions among factors, agents, and levels into account to design a coordinated package of policies or interventions. Thus, discussions of the public health problems posed by obesity also involve agriculture, economics, marketing, and so on.

In addition, a systems approach means thinking carefully about the importance of circumstances in which events occur to understand the

implications of actions for different groups. For example, which actions would have the greatest impact most quickly to address a problem?

At a more formal level, systems approaches can include a qualitative approach called systems mapping. This process involves identifying the different parts of a system and their interactions, often through partnerships with stakeholders, and developing a visualization that includes feedback loops, synergies, leverage points, and gaps that can be filled to accelerate progress. Appendix B of Accelerating Progress in Obesity Prevention contains such a model and demonstrates how it can be used (IOM, 2012a).

The most formal level of a systems model is quantitative. At this level, the model quantifies the knowledge from theory, from data analysis, and from experience to create a computational simulation with which policy choices can be explored to provide on-the-ground guidance. Such models also create new possibilities for the evaluation of policies because they can help reveal the mechanisms behind outcomes. These models should not be seen as crystal balls, Hammond warned; they do not eliminate the need to make difficult decisions or judgment calls. But they can serve as guides to policy and help policy makers deal with uncertainty by identifying policies that are robust despite uncertainty. Training and standards must be in place for the results of models to be used appropriately, Hammond added.

The systems map developed in Accelerating Progress in Obesity Prevention (IOM, 2012a) focuses on one type of link—that between strategies and goals. For example, a single strategy can serve multiple goals both directly and indirectly, creating synergies that may not be apparent without a systems model.

Earlier presentations in the workshop pointed to other types of links and examples of synergies. Hammond cited as one important kind of synergy what he called prerequisites, in which one action depends for at least some of its success on a previous action. An example is seen in menu and food labeling, one of the strategies from Accelerating Progress in Obesity Prevention discussed in Chapter 6, which can be much more effective if accompanied by nutrition education. The more consumers know about the elements of a food label and understand what that information represents, the more they will be able to use the information

to make healthy choices. Nutrition education and food labeling are likely to occur in different sectors, but they work together, and Hammond suggested that they may be prerequisites for each other if each is to realize its full potential impact.

Another example involves investment in parks and recreational infrastructure, discussed in Chapter 2. Previous or simultaneous investments in crime reduction, transportation, adult supervision, and infrastructure can make parks much more useful than they would otherwise be. Similarly, the availability of healthy food options near a park can help ensure that people who have just been active do not then fill up on sugar-sweetened beverages.

A final example involves the beneficial effects of media literacy on reducing the impacts of advertising, discussed in Chapter 6. Even if advertising were reformed, Hammond stated, some people would still be exposed to unhealthy marketing. Greater media literacy could help those still exposed filter messages and avoid unhealthy behaviors.

Another type of link is complementarity, Hammond explained. For example, investments in parks and recreational infrastructure can complement advertising reform by reducing the amount of time people spend in front of screens. Similarly, an emphasis on breastfeeding can be complemented by access to healthy food for both mothers and their children.

In addition, multiple actions can be focused on the same goal but from different parts of a system. For example, breastfeeding can be promoted through primary care consultation, changes in social norms, the elimination of deterrents, reductions in poverty and teenage pregnancy, supportive worksite policies, and breastfeeding-friendly hospitals. Employing all of these approaches will have the greatest impact and could yield more than the sum of the parts.

Systems thinking provides an opportunity to coordinate policy and action for obesity prevention, stressed Hammond. Policies and actions in schools, for example, can complement those in doctors’ offices and worksites. Coordinated approaches provide synergies while increasing the motivation of those who need to act.

Computational models can help focus and prioritize actions, suggested Hammond. They also can help with timing in that some steps

can be taken initially and others later to leverage the complexity of the system.

Finally, systems thinking can help engage nontraditional partners, such as civil rights lawyers, economists, and systems analysts, who do not fit into a traditional public health mold.

The application of systems tools, whether qualitative or quantitative, requires data, funding, partnerships, and complementary approaches. It also requires coordinating policies and actions across many different sectors, which often is not easy, Hammond explained. However, obesity prevention has some features that make systems approaches promising. The centrality of the community in both originating and implementing ideas provides a logical nexus for coordination. Coalition building and stakeholder engagement can enable coordination. And interdisciplinary approaches, while always difficult, are becoming more common and more powerful, said Hammond.

In considering the five environments diagrammed in Figure 1-1 in Chapter 1 of this report, Accelerating Progress in Obesity Prevention states that action in any one of the five areas would accelerate progress in preventing obesity, but the effect of action taken in all areas together would be reinforced, amplified, and maximized (IOM, 2012a). A systems approach could make such optimization possible, Hammond concluded.

“A theme we heard a lot today is the importance of having sufficient activation energy, outrage, political will—it has been called a lot of things, but I think we are talking about the same thing. There has to be enough engagement by enough people that there is momentum for change.” —Ross Hammond

Next: References »
Creating Equal Opportunities for a Healthy Weight: Workshop Summary Get This Book
× 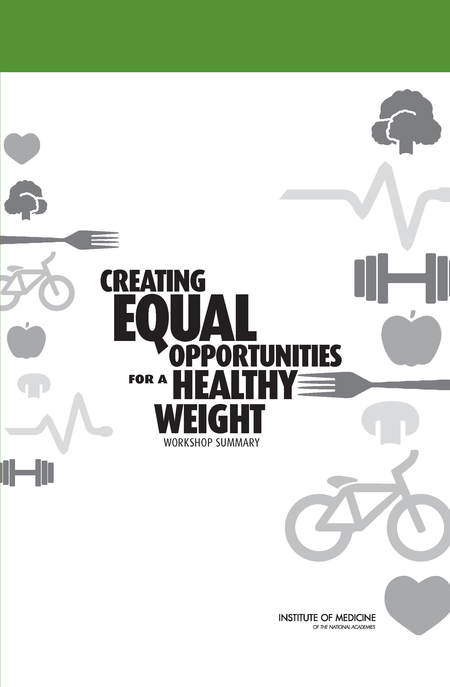 Creating Equal Opportunities for a Healthy Weight is the summary of a workshop convened by the Institute of Medicine's Standing Committee on Childhood Obesity Prevention in June 2013 to examine income, race, and ethnicity, and how these factors intersect with childhood obesity and its prevention. Registered participants, along with viewers of a simultaneous webcast of the workshop, heard a series of presentations by researchers, policy makers, advocates, and other stakeholders focused on health disparities associated with income, race, ethnicity, and other characteristics and on how these factors intersect with obesity and its prevention. The workshop featured invited presentations and discussions concerning physical activity, healthy food access, food marketing and messaging, and the roles of employers, health care professionals, and schools.

The IOM 2012 report Accelerating Progress in Obesity Prevention acknowledged that a variety of characteristics linked historically to social exclusion or discrimination, including race, ethnicity, religion, socioeconomic status, gender, age, mental health, disability, sexual orientation or gender identity, geographic location, and immigrant status, can thereby affect opportunities for physical activity, healthy eating, health care, work, and education. In many parts of the United States, certain racial and ethnic groups and low-income individuals and families live, learn, work, and play in places that lack health-promoting resources such as parks, recreational facilities, high-quality grocery stores, and walkable streets. These same neighborhoods may have characteristics such as heavy traffic or other unsafe conditions that discourage people from walking or being physically active outdoors. The combination of unhealthy social and environmental risk factors, including limited access to healthy foods and opportunities for physical activity, can contribute to increased levels of chronic stress among community members, which have been linked to increased levels of sedentary activity and increased calorie consumption. Creating Equal Opportunities for a Healthy Weight focuses on the key obesity prevention goals and recommendations outlined in Accelerating Progress in Obesity Prevention through the lens of health equity. This report explores critical aspects of obesity prevention, while discussing potential future research, policy, and action that could lead to equity in opportunities to achieve a healthy weight.