Seeking Solutions: Maximizing American Talent by Advancing Women of Color in Academia: Summary of a Conference (2013)

Get This Book
Visit NAP.edu/10766 to get more information about this book, to buy it in print, or to download it as a free PDF.
« Previous: Appendix E-6: Women of Color in Physics Departments: A Data Picture17
Page 173 Share Cite
Suggested Citation:"Appendix E-7: American Mathematical Society Written Testimony." National Research Council. 2013. Seeking Solutions: Maximizing American Talent by Advancing Women of Color in Academia: Summary of a Conference. Washington, DC: The National Academies Press. doi: 10.17226/18556.
×

A Demographic Profile of the Faculty in Fall 201018

The following tables provide estimates of the numbers of faculty in various categories within departments housing the undergraduate mathematical sciences programs at two-year and four-year colleges and universities in the US. These tables are taken from a publication in preparation by the American Mathematical Society as part of the report of the 2010 Conference Board of the Mathematical Sciences Survey of Undergraduate Program in the Mathematical Sciences. The reported is scheduled for publication and distribution in September 2012. This project is supported by a grant from the National Science Foundation.

The tables provided are those that provide a view of the gender breakout of the faculty in various appointment categories and also the gender by race/ethnicity where available.

The first seven tables describe the mathematics and statistics faculty at four-year colleges and universities, and the final seven are for public two-year colleges.

Questions about these tables should be directed to Dr. James Maxwell, Associate Executive Director, AMS, jwm@ams.org and 401-455-4035.

Table E-7-2 Percentage of gender and of racial/ethnic groups among all tenured, tenure-eligible, postdoctoral and other full time faculty in mathematics departments of four-year colleges and universities in fall 2010.

Notes: The column “Other/Unknown” includes the federal categories Native American/Alaskan Native and Native Hawaiian/Other Pacific Islander. 0 means less than half of 1 percent and this may cause apparent column sum inconsistencies.

Table E-7-3 Percentage of gender and racial/ethnic groups among all tenured, tenure-eligible, postdoctoral, and other full-time faculty in doctoral and masters statistics departments (combined) at universities in fall 2010.

Notes: The column “Other/Unknown” includes the federal categories Native American/Alaskan Native and Native Hawaiian/Other Pacific Islander. 0 means less than half of 1 percent and this may cause apparent column sum inconsistencies.

Table E-7-4 Number of tenured, tenure-eligible, postdoctoral, and other full-time faculty in mathematics departments at four-year colleges and universities by gender and type of department in fall 2010. (Note: Postdoctoral faculty are included in other full-time totals.)

Table E-7-6 Percentages of full-time faculty belonging to various ethnic groups, by gender and type of department, in fall 2010. Except for round-off, the percentages within each departmental type sum to 100 percent.

Table E-7-7 Percentages of part-time faculty belonging to various ethnic groups, by gender and type of department, in fall 2010. Except for round-off, the percentages within each departmental type sum to 100 percent.

Notes: * denotes the data source of that column is from Report Table 65 from IPEDS Fall 2009 Compendium Tables, National Center for Education Statistics. nces.ed.gov/library/ipeds_com.asp. (These figures include resident aliens but do not include a total of 2074 nonresident aliens who also received masters degrees.) 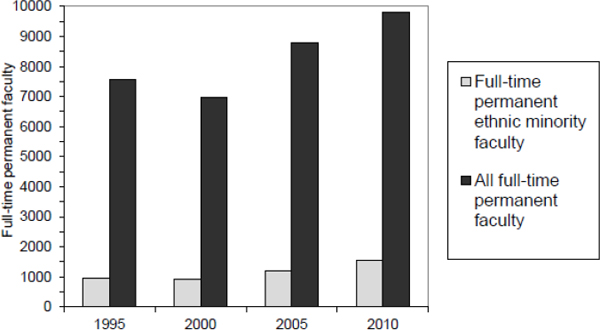 Notes: Zero means less than half of one percent.

Notes: Zero means less than half of one percent.

This Award for Mathematics Programs that Make a Difference was established in 2005 by the AMS's Committee on the Profession to compile and publish a series of profiles of programs that:

•   aim to bring more persons from under-represented minority backgrounds into some portion of the pipeline beginning at the undergraduate level and leading to advanced degrees in mathematics and professional success, or retain them once in the pipeline;

•   have achieved documentable success in doing so; and

Mathematics Programs That Make a Difference 2007

This year the AMS recognizes Enhancing Diversity in Graduate Education (EDGE), run collaboratively by Bryn Mawr College and Spelman College, and the Mathematical Theoretical Biology Institute (MTBI), currently conducted at Arizona State University. Both of these are successful programs that have made significant contributions to the effort of supporting and encouraging underrepresented minorities to continue in the study of mathematics.

The EDGE program pairs an academic component (a four-week summer program) with a mentoring component. The program's long-range goals are to increase the presence of women, with a special focus on women of color, in the upper ranks of mathematical scientists, and to create models for mathematics programs that allow people from all backgrounds and cultures to thrive, advance and contribute to the profession. The four-week Summer Program provides intense exposure to material and mastery through problem solving by a combination of individual effort and teamwork. The curriculum consists of two, four-week core courses, one in abstract and linear algebra and one in analysis; problem sessions conducted by three graduate student mentors; a mini-course and guest lectures on timely areas of mathematical research; TeX sessions and presentations by participants. The Follow-Up Mentoring Program provides support, both socially and professionally, for the graduate school experience. The co-directors and local coordinator arrange for a faculty mentor at each student's graduate institution. In addition, they maintain contact with students during the year and provide a small research allowance for books and professional travel. Each student is invited to return to EDGE the following summer for a

19 This information is drawn from the following page on the AMS website: www.ams.org/profession/prizes-awards/ams-supported/make-E-diff-award. For more information about this program, please contact Dr. Ellen Maycock, Associate Executive Director, AMS, via e-mail at ejm@ams.org or by phone at 800-321-4267, ext. 4101.

reunion, and an electronic bulletin board allows alumnae to share triumphs and challenges throughout their graduate school years.

One hundred five outstanding women were accepted into the EDGE Program from 1998 to 2006. As of 2005, data show that EDGE participants are from diverse racial (49 percent underrepresented minorities) and educational (44 percent liberal arts) backgrounds. In the first eight years of EDGE (1998-2005), 90 EDGE students entered graduate programs; approximately 92 percent of these students either are actively pursuing or have earned a graduate degree. By 2006, 28 percent of the total group had earned a master's degree and discontinued their education, most often to accept employment, and 58 percent were continuing in a graduate degree program. To date, six EDGE participants (6.7 percent) and three other EDGE graduate mentors have earned their doctoral degrees in mathematics, and several other participants expect to complete their degree requirements by the end of 2007. Among the six doctoral recipients, three are white and three are African American.

The AMS commends the program co-directors, Sylvia Bozeman (Spelman College) and Rhonda Hughes (Bryn Mawr College), for their success in improving the diversity of the profession of mathematics in the United States.

Every summer MTBI offers sequential research experiences for undergraduates and graduate students, most of whom come from underrepresented minority groups. The program has run for eleven years in conjunction with Cornell University, Los Alamos National Laboratory and Arizona State University. MTBI focuses on the field of applied mathematics, in particular on applications to the biological and social sciences, and provides research training and mentorship for students. New students take three and a half weeks of intense training in dynamical systems (broadly understood to include stochastic processes) and modeling in the biological and social sciences. At the end of the initial training period, students set their own research agenda each summer by forming research groups of 3-4 participants around a project of their choice. Each group is assigned a faculty advisor and provided with appropriate graduate student support.

The AMS commends the director of MTBI, Carlos Castillo-Chavez, for his high level of commitment and his successful efforts to improve the diversity of the profession of mathematics in the United States.

For more information about the nomination process, please contact Dr. Ellen Maycock, Associate Executive Director, AMS, via e-mail at ejm@ams.org or by phone at 800-321-4267, ext. 4101.

Seeking Solutions: Maximizing American Talent by Advancing Women of Color in Academia is the summary of a 2013 conference convened by the Committee on Women in Science, Engineering and Medicine of the National Research Council to discuss the current status of women of color in academia and explore the challenges and successful initiatives for creating the institutional changes required to increase representation of women of color at all levels of the academic workforce. While the number of women, including minority women, pursuing higher education in science, engineering and medicine has grown, the number of minority women faculty in all institutions of higher education has remained small and has grown less rapidly than the numbers of nonminority women or minority men.

Seeking Solutions reviews the existing research on education and academic career patterns for minority women in science, engineering, and medicine to enhance understanding of the barriers and challenges to the full participation of all minority women in STEM disciplines and academic careers. Additionally, this report identifies reliable and credible data source and data gaps, as well as key aspects of exemplary policies and programs that are effective in enhancing minority women's participation in faculty ranks. Success in academia is predicated on many factors and is not solely a function of talent. Seeking Solutions elucidates those other factors and highlights ways that institutions and the individuals working there can take action to create institutional cultures hospitable to people of any gender, race, and ethnicity.