Visit NAP.edu/10766 to get more information about this book, to buy it in print, or to download it as a free PDF.
Page i Share Cite
Suggested Citation:"Front Matter." National Research Council. 1986. Workshop on Biotechnology in Agriculture: Summary Report, Jakarta, Indonesia, March 13-14, 1986. Washington, DC: The National Academies Press. doi: 10.17226/18585.
×

PREFACE In 1985, the National Research Council of Indonesia (DRN) invited the Board on Science and Technology for International Development (BOSTID) to join it in sponsoring a workshop on the application of biotechnology to agricultural development. This workshop was held in Jakarta, Indonesia, March 13-14, 1986. The primary objectives of the workshop were to exchange information and experience on applying biotechnology to agriculture, to discuss how the present state of and future prospects for biotechnology could lead to increased agricultural production in Indonesia, and to set priorities for the application of biotechnology to agriculture in four areas: embryo transfer and animal production, plant cell and tissue culture, biological nitrogen fixation, and bioconversion of agricultural by-products. Agricultural development has high priority in Indonesia. It is key to fulfilling the basic needs of its people and providing prosperity for the country. Such development faces great challenges, however, since the demand for food--in relation to both quantity and quality-- continues to rise. The tremendous amount of existing agricultural by-products, now underutilized, could be used to produce food, feed, and other industrial products. Particular attention was given in the workshop to the industrial potential of products that may arise from the application of biotechnology as well as how to increase agricultural output. Attention was focused not only on near-term prospects, but also on the longer term which will be affected by the use of biotechnological techniques. These activities were one activity in a larger program of cooperation between BOSTID and the Indonesian government. Begun in 1968, this program has featured a series of workshops on food policy, industrial and technological research, natural resources, rural productivity, manpower planning, and marine algae biotechnology. BOSTID's participation has been supported in the context of a science and technology loan from the U.S. Agency for International Development (USAID) to the government of Indonesia. The current two-year program with BOSTID calls for a number of activities (panel discussions, workshops, follow-up activities, or small advisory groups) to be organized each year. -iii-

ORGANIZATION OF THE WORKSHOP This workshop was organized by the National Committee for Biotechnology of the Office of the Minister of State for Research and Technology under the sponsorship of the Indonesian National Research Council. Prior to the workshop, a one-day visit was made to the Marihat area to meet with officials of the oil palm estate, research center, and palm oil factory located there. The next two days were spent in the Bogor area visiting officials of Bogor Agricultural University, staff of the Bogor Research Institute for Estate Crops, several dairy farms, as well as Tapos, the personal farm of President Suharto. All of these site visits were arranged by the staff of the Biotechnology Organizing Committee. Dr. A. M. Satari, on behalf of the steering committee, convened the workshop in plenary session on the morning of March 13 (see Appendix A). Mr. Richard A. Cobb, chief of the Office of Agriculture and Rural Development of the USAID Mission in Indonesia, commented on the timeliness of these discussions given that biotechnology will likely become the foundation of a new revolution in agricultural research and development through the remainder of the century (see Appendix B). Dr. Doddy A. Tisna Amidjaja, vice-chairman of the DRN, officially opened the workshop on behalf of Dr. B. J. Habibie, minister of state for research and technology and chairman of the DRN. He then described the long relationship between Indonesia and the U.S. National Research Council. He indicated that Indonesia's future development will depend heavily on its ability to use science and technology effectively, especially in the utilization of its endowment of natural as well as human resources. He expressed his hope that recommendations from this workshop would focus on program priorities, research and development needs, and manpower development (see Appendix C). Papers prepared for the workshop compose Part I of this report. During the workshop, participants broke into four working groups which addressed the four specific areas of concern: embryo transfer and animal production, plant cell and tissue culture, plant nitrogen fixation, and bioconversion of agricultural by-products. On March 14, the conclusions and recommendations of the four working groups were presented by the chairperson of each group. Dr. Charles C. Muscoplat, chairman of the U.S. National Research Council (NRC) panel, spoke on behalf of his U.S. colleagues about the various steps needed for Indonesia to further develop its capability in biotechnology. His comments are included in Part III of this report. The workshop agenda and a list of the participants are included as Appendixes D and E, respectively. This workshop report was prepared by Rose Bannigan of the BOSTID staff using papers written by the Indonesian and NRC workshop participants. The papers have been edited to eliminate duplication, but they accurately reflect the discussions. The final draft was reviewed and approved by the members of the NRC panel and the Indonesian organizing committee. Sabra Bissette Ledent, BOSTID consultant, edited the report. -iv-

Participants would like to acknowledge the valuable contribution of the workshop's organizing committee to the final arrangements for the workshop as well as to the site visits to Marihat and Bogor. The organizing committee was chaired by Dr. Haryanto Dhanutirto. Special thanks is due to Ir. Oestara Wiradinata, director of Utama PT Perkebunan, and his colleagues for receiving the visitors to the oil palm estate and industry and for their generous hospitality. Appreciation is also extended to officials at Tapos for hosting the visit to their cattle breeding experiment station. Finally, the participants would like to thank the members of the workshop secretariat for the excellent organization of the workshop. The secretariat was under the supervision of Drs. Jana Anggadiredja. -v-

Next: OVERVIEW »
Workshop on Biotechnology in Agriculture: Summary Report, Jakarta, Indonesia, March 13-14, 1986 Get This Book
× 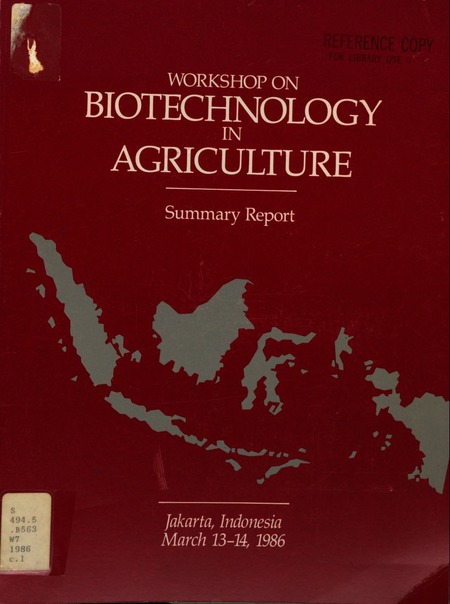