Harnessing Operational Systems Engineering to Support Peacebuilding: Report of a Workshop by the National Academy of Engineering and United States Institute of Peace Roundtable on Technology, Science, and Peacebuilding (2013)

Get This Book
Visit NAP.edu/10766 to get more information about this book, to buy it in print, or to download it as a free PDF.
« Previous: 3 The Potential of Operational Systems Engineering
Page 35 Share Cite
Suggested Citation:"4 Case Study: Election Violence in Kenya." National Academy of Engineering. 2013. Harnessing Operational Systems Engineering to Support Peacebuilding: Report of a Workshop by the National Academy of Engineering and United States Institute of Peace Roundtable on Technology, Science, and Peacebuilding. Washington, DC: The National Academies Press. doi: 10.17226/18598.
×

In the afternoon, the workshop broke up into three parallel breakout discussions to look at specific issues in Kenya, South Sudan, and Haiti and at what methods might allow the application of systems engineering in each case. Drawing on materials prepared before the workshop and on brief plenary presentations on the three cases, subsets of workshop participants discussed each situation in depth, prepared analyses, and proposed actions that were presented in the final plenary session of the workshop.

This chapter describes the deliberations and conclusions of the subgroup that examined election violence in Kenya. Chapter 5 examines food security in South Sudan, and Chapter 6 looks at post-earthquake peacebuilding in Haiti.

A HISTORY OF ELECTION VIOLENCE1

1 The introduction to this chapter is drawn from a background paper prepared for the workshop by Ryan Shelby, Christine Mirzayan Science & Technology Policy Fellow and J. Herbert Hollomon Fellow at the National Academy of Engineering.

FIGURE 4-1 The Rift Valley province, stretching from the northern border to the southern border in the western part of Kenya, was the main site of organized violence associated in the 2007 elections. SOURCE: CIA World Factbook, “Final Report,” Commission of Inquiry into the Post Election Violence (CIPEV), 2008.

ber of the Kalenjin ethnic group), introduced the first multiparty election system since Kenya’s independence in 1963. In the lead-up to the first such elections in 1992, groups and individuals affiliated with the KANU organized gangs of armed young men, with the promise of land and jobs, to carry out violence against members of the Luo, Luhya, Kamba, and Kikuyu ethnic groups in the Rift Valley (Figure 4-1). This resulted in approximately 250,000 people displaced (mainly Kikuyu) and approximately 1,500 people killed (Figures 4-2 and 4-3).

In 1997 multiparty elections were again marred by organized violence against groups in the Rift Valley and Coast provinces that were viewed as opposed to the KANU. Approximately 100,000 people were displaced and about 400 killed.

The 2002 election featured two Kikuyu contenders for the presidency: Mwai Kibaki of the newly formed National Rainbow Coalition (NARC) and Uhuru Kenyatta of the KANU. The 2002 election of President Kibaki is notable for the relative lack of organized violence and was deemed to be fair and free, although there were reported incidents of a small number of deaths (fewer than 200) and evictions.

The aftermath of the discrepancy-laden December 2007 Kenya election resulted in more than 630,000 people displaced and 1,133 killed, most of them in the Rift Valley (Figure 4-1). Pre- and post-election violence included excessive and calculated use of police forces to intimidate Orange Demo- 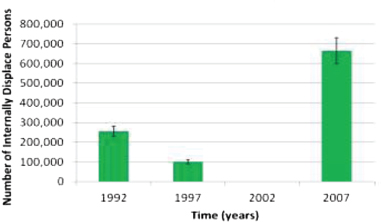 FIGURE 4-2 The number of Internally Displaced Persons (IDPs) rose as a result of election violence in 2007 after declines in previous Kenyan elections. SOURCE: “Final Report,” Commission of Inquiry into the Post Election Violence (CIPEV), 2008. 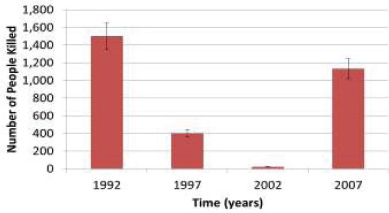 FIGURE 4-3 Deaths associated with the 2007 election in Kenya rose after declines in the previous two elections. SOURCE: “Final Report,” Commission of Inquiry into the Post Election Violence (CIPEV), 2008.

cratic Movement (ODM) members, the rape of women by police forces, use of live ammunition against demonstrators, attacks by armed youth militias such as the Mungiki against ODM supporters, and attacks by ODM-affiliated groups such as the Sabaot Land Defense Force against supporters of President Kibaki’s Party of National Unity.

Dorina Bekoe, research staff member in the Africa Program at the Institute for Defense Analyses, reviewed the major peacebuilding challenges in Kenya. At the time of the workshop, tensions were building in anticipation of an election scheduled for March 4, 2013. For example, the Communications Commission of Kenya established regulations for the content and distribution of political messages. First, they could not contain hate speech, which had been a critical factor in fostering electoral violence in 2007. Second, the messaging had to be in English or Swahili, the two most commonly understood tongues, to ensure transparency. Third, it had to be cleared in advance by the Commission to prevent nonstandard media channels from being used to incite violence as community radio had been used to do in 2007. And finally, political messages had to be issued between 6:00 AM and 6:00 PM.

Other pre-election activities included work done by the Electoral Institute for Sustainable Democracy in Africa, which put together conflict management panels in Kenya and conducted training and workshops to forestall possible violence. An elections observation group established in 2010 before a constitutional referendum in Kenya planned to monitor the election and check the vote tabulation, which was a problem in 2007, because the electoral commission was perceived as biased. US-based organizations were also working with other domestic groups on planning and training.

One of the most significant pre-election episodes of violence occurred in August 2012 in the Tana Delta, according to Bekoe. It took the form of communal clashes between the Orma, who are largely Muslim and pastoralists, and the Pokomo, who are Christian and agriculturalists. The violence, which resulted in more than 100 dead and about 12,000 displaced, ostensibly centered on access to the delta for cattle or crops. But behind the scenes, politicians were maneuvering to be elected and establish coalitions, raising the potential for political conflict.

Other hotspots included the Rift Valley and the Eastern provinces, where ethnic tensions were combining with political machinations to increase the likelihood of violence. Politicians play on preexisting ethnic grievances, many of them involving land use, to recruit voters, said Bekoe. In addition, politicians who had been found responsible for inciting violence in the past had not been punished, creating a sense of impunity that could contribute to future violence. Furthermore, police reforms were lagging in Kenya.

According to Jose Emmanuel Ramirez-Marquez, director of the Engineering Management Program in the System Development and Maturity Lab at Stevens Institute of Technology, who reported on the breakout group discussion, a major challenge in applying operational systems engineering to peacebuilding in Kenya is identifying the data needed to enable more peaceful elections. Such data would help in the mapping of relationships that promote violence and could thus inform steps toward the stabilization of Kenyan elections.

A related issue is the development of conflict assessments, and particularly the metrics used for them. Conflict assessment is different from systems engineering, which takes a much broader view of the context, not just the conflicts. As Sheldon Himelfarb, director of the USIP Center of Innovation for Science, Technology, and Peacebuilding, noted, NGOs have tended to focus on flashpoints rather than more broadly assessing the structure and dynamics of a conflict.

The breakout group focused on two major objectives, said Ramirez-Marquez. The first was the local capacity for maintaining peace. Local systems can be seen as components of larger systems and analyzed separately, if information and data are available at that level of detail, and thus serve as representative test beds for larger systems analyses. If data are not available for such an analysis, a systems approach can be used to identify the data needed to understand a local situation and establish an agenda for data gathering and research.

The second objective addressed by the group was the development of an early warning and early response system for election-related violence. Such a system would depend critically on the provision of the information and on the actions of those who receive it. Many early warning systems exist in Kenya at local, regional, and national levels, but the relationships between them are not clearly established. If systems analysis indicated that connecting a subset of systems would yield more useful warnings, this could be an important benefit of such an approach. The Kenyan government has an early warning system, and various peacebuilding groups were feeding information into it, but whether any action would be taken based on the warnings was still unclear, said Ramirez-Marquez.

The group decided on three concrete steps that could be taken:

Use a systems approach to map the situation in Kenya in order to form testable hypotheses.

Examine the sources of data for such a map.

Use these data to build a statistical history of election violence in Kenya, which could be useful in analyzing the future potential for violence.

Bekoe noted that data could be gathered in each of the five areas cited by Beth Cole as desirable end states (see Chapter 2): rule of law, safe and secure environment, sustainable economy, stable government, and social well-being. Commissions formed after large-scale violence in the country have done painstaking data gathering and analyses of conflicts. Furthermore, crowdsourcing systems such as Ushahidi are creating independent and accountable sources of information for people working in potentially violent environments. Using such platforms, activists have been able to collect, visualize, and communicate reports of election violence that have been e-mailed and texted from people throughout Kenya.

Violence often depends on context, said Bekoe, and it has occurred both in traditional hotspots and in new locations. Analysis of data on disputes over time viewed from a systems perspective might yield insights into differences in the number and intensity of disputes. More effective application of systems engineering tools for understanding and planning would be possible with the additional data now available.

Members of the breakout group agreed that the application of operational systems engineering to elections in Kenya could affect the March 4, 2013, election. Because of the lack of time available prior to the elections, however, the impact of any analysis undertaken by the working group would most likely be retrospective rather than prospective. Even such retrospective analysis, members thought, could demonstrate the applicability of systems engineering to peacebuilding while enabling learning that would support future applications in places such as presidential elections in Afghanistan in 2014 and parliamentary elections in Burma in 2015.

Next: 5 Case Study: Food Security in South Sudan »
Harnessing Operational Systems Engineering to Support Peacebuilding: Report of a Workshop by the National Academy of Engineering and United States Institute of Peace Roundtable on Technology, Science, and Peacebuilding Get This Book
× 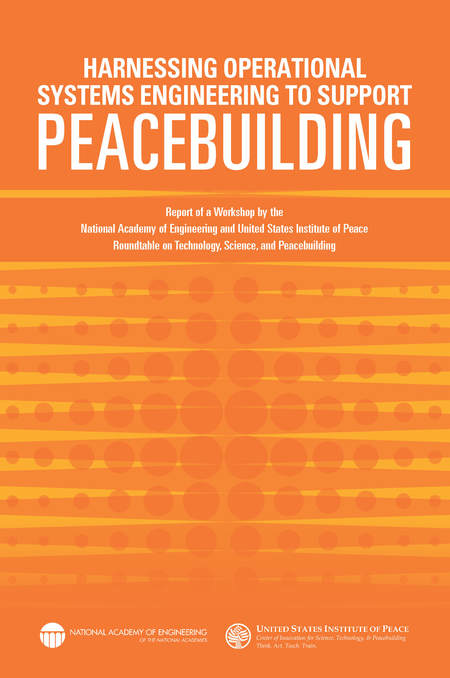 Operational systems engineering is a methodology that identifies the important components of a complex system, analyzes the relationships among those components, and creates models of the system to explore its behavior and possible ways of changing that behavior. In this way it offers quantitative and qualitative techniques to support the design, analysis, and governance of systems of diverse scale and complexity for the delivery of products or services. Many peacebuilding interventions function essentially as the provision of services in response to demands elicited from societies in crisis. At its core, operational systems engineering attempts to understand and manage the supply of services and product in response to such demands.

Harnessing Operational Systems Engineering to Support Peacebuilding is the summary of a workshop convened in November 2012 by the Roundtable on Science, Technology, and Peacebuilding of the National Academy of Engineering and the United States Institute of Peace to explore the question "When can operational systems engineering, appropriately applied, be a useful tool for improving the elicitation of need, the design, the implementation, and the effectiveness of peacebuilding interventions?" The workshop convened experts in conflict prevention, conflict management, postconflict stabilization, and reconstruction along with experts in various fields of operational systems engineering to identify what additional types of nonnumerical systems methods might be available for application to peacebuilding.