The Growth of Incarceration in the United States: Exploring Causes and Consequences (2014)

Get This Book
Visit NAP.edu/10766 to get more information about this book, to buy it in print, or to download it as a free PDF.
« Previous: References
Page 419 Share Cite
Suggested Citation:"Appendix A: Supplementary Statement by Ricardo H. Hinojosa." National Research Council. 2014. The Growth of Incarceration in the United States: Exploring Causes and Consequences. Washington, DC: The National Academies Press. doi: 10.17226/18613.
×

I respect the views of the members of the study committee who have worked hard over the last 2 years to forge a consensus based on their review of the body of published scholarly research regarding the causes and consequences of the rise of incarceration in the United States. Although I have not personally engaged in academic research, my expertise and views on these matters are based on 30 years as a federal district judge sentencing thousands of individuals, reviewing their presentence reports, and presiding over their sentencing hearings as well as having served for more than 10 years on the United States Sentencing Commission. My views are not meant to represent views of the federal judiciary nor the United States Sentencing Commission.

increased incarceration. However, I do not write separately on the matters in this report about which I may have concerns because I concur with the recommendations in this report, which are important, ripe for consideration and need to be addressed by the public and the policy makers.

Next: Appendix B: Data Sources »
The Growth of Incarceration in the United States: Exploring Causes and Consequences Get This Book
× 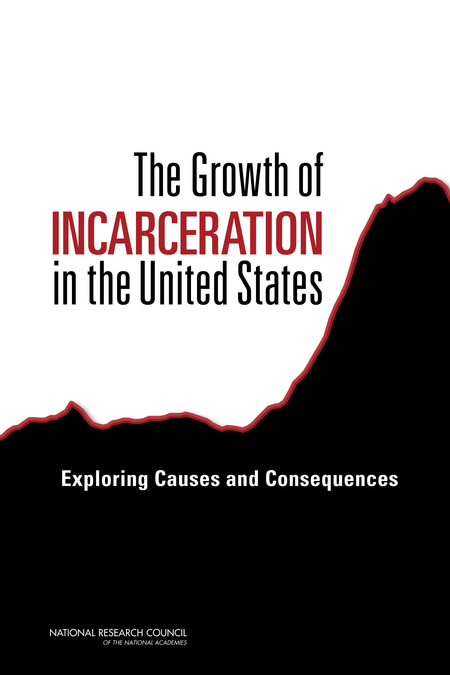 After decades of stability from the 1920s to the early 1970s, the rate of imprisonment in the United States more than quadrupled during the last four decades. The U.S. penal population of 2.2 million adults is by far the largest in the world. Just under one-quarter of the world's prisoners are held in American prisons. The U.S. rate of incarceration, with nearly 1 out of every 100 adults in prison or jail, is 5 to 10 times higher than the rates in Western Europe and other democracies. The U.S. prison population is largely drawn from the most disadvantaged part of the nation's population: mostly men under age 40, disproportionately minority, and poorly educated. Prisoners often carry additional deficits of drug and alcohol addictions, mental and physical illnesses, and lack of work preparation or experience. The growth of incarceration in the United States during four decades has prompted numerous critiques and a growing body of scientific knowledge about what prompted the rise and what its consequences have been for the people imprisoned, their families and communities, and for U.S. society.

The Growth of Incarceration in the United States recommends changes in sentencing policy, prison policy, and social policy to reduce the nation's reliance on incarceration. The report also identifies important research questions that must be answered to provide a firmer basis for policy. The study assesses the evidence and its implications for public policy to inform an extensive and thoughtful public debate about and reconsideration of policies.