The Arc of the Academic Research Career: Issues and Implications for U.S. Science and Engineering Leadership: Summary of a Workshop (2014)

Get This Book
Visit NAP.edu/10766 to get more information about this book, to buy it in print, or to download it as a free PDF.
Page i Share Cite
Suggested Citation:"Front Matter." National Academy of Sciences, National Academy of Engineering, and Institute of Medicine. 2014. The Arc of the Academic Research Career: Issues and Implications for U.S. Science and Engineering Leadership: Summary of a Workshop. Washington, DC: The National Academies Press. doi: 10.17226/18627.
×

Issues and Implications for U.S. Science and Engineering Leadership

Summary of a Workshop

This study was supported by Grant No. B2013-31 between the National Academy of Sciences and the Alfred P. Sloan Foundation. Any opinions, findings, conclusions, or recommendations expressed in this publication are those of the authors and do not necessarily reflect the views of the organization that provided support for the project.

DAVID DANIEL [NAE], President, The University of Texas at Dallas

SHIRLEY M. MALCOM [NAS] Head of the Directorate for Education and Human Resources Programs, American Association for the Advancement of Science

DAVID DANIEL [NAE], President, The University of Texas at Dallas

This report has been reviewed in draft form by individuals chosen for their diverse perspectives and technical expertise, in accordance with procedures approved by the National Academies’ Report Review Committee. The purpose of this independent review is to provide candid and critical comments that will assist the institution in making its published report as sound as possible and to ensure that the report meets institutional standards for quality and objectivity. The review comments and draft manuscript remain confidential to protect the integrity of the process.

Although the reviewers listed above have provided many constructive comments and suggestions, they were not asked to endorse the content of the report, nor did they see the final draft before its release. Responsibility for the final content of this report rests entirely with the rapporteur and the institution.

Structure of the Academic Research Career

The Economics of Early Careers

It’s All in the Timing

Next: 1 Introduction »
The Arc of the Academic Research Career: Issues and Implications for U.S. Science and Engineering Leadership: Summary of a Workshop Get This Book
× 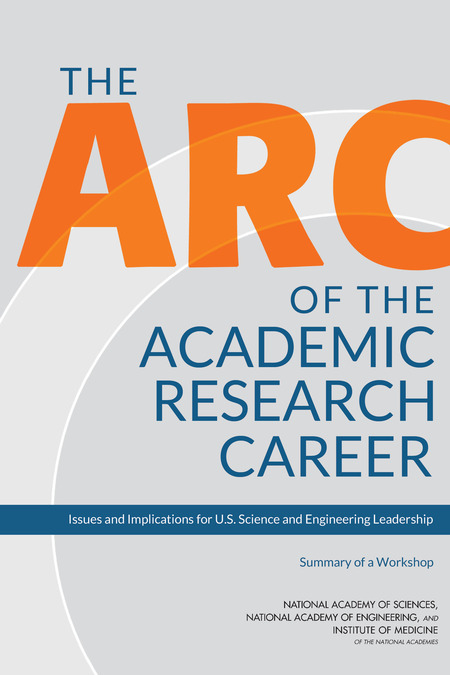 America's research universities have undergone striking change in recent decades, as have many aspects of the society that surrounds them. This change has important implications for the heart of every university: the faculty. To sustain their high level of intellectual excellence and their success in preparing young people for the various roles they will play in society, universities need to be aware of how evolving conditions affect their ability to attract the most qualified people and to maximize their effectiveness as teachers and researchers.

Gender roles, family life, the demographic makeup of the nation and the faculty, and the economic stability of higher education all have shifted dramatically over the past generation. In addition, strong current trends in technology, funding, and demographics suggest that change will continue and perhaps even accelerate in academe in the years to come. One central element of academic life has remained essentially unchanged for generations, however: the formal structure of the professorial career. Developed in the mid-nineteenth and early twentieth centuries to suit circumstances quite different from today's, and based on traditions going back even earlier, this customary career path is now a source of strain for both the individuals pursuing it and the institutions where they work.

The Arc of the Academic Research Career is the summary of a workshop convened by The Committee on Science, Engineering, and Public Policy in September 2013 to examine major points of strain in academic research careers from the point of view of both the faculty members and the institutions. National experts from a variety of disciplines and institutions discussed practices and strategies already in use on various campuses and identified issues as yet not effectively addressed. This workshop summary addresses the challenges universities face, from nurturing the talent of future faculty members to managing their progress through all the stages of their careers to finding the best use of their skills as their work winds down.