Responsible Science: Ensuring the Integrity of the Research Process: Volume I (1992)

Get This Book
Visit NAP.edu/10766 to get more information about this book, to buy it in print, or to download it as a free PDF.
« Previous: 8 SELECTED BIBLIOGRAPHY
Page 180 Share Cite
Suggested Citation:"MINORITY STATEMENT." National Academy of Sciences, National Academy of Engineering, and Institute of Medicine. 1992. Responsible Science: Ensuring the Integrity of the Research Process: Volume I. Washington, DC: The National Academies Press. doi: 10.17226/1864.
×

Three general concerns preclude our support of the present report. First, its overall tone presents an unbalanced treatment of scientists and institutions. It fails to convey the overriding importance of intellectual freedom and trust in a creative process that has been remarkably successful, and it lacks conviction in assessing the consequences of inappropriate institutional action or inaction. Second, the report is equivocal in defining misconduct in science and is inadequate in stating explicitly the problems inherent in alternative definitions. The “other misconduct” category introduces ambiguities into the definition, and blurs the boundaries between misconduct in science and questionable practice. Misconduct in science requires rigorous adjudicatory machinery and governmental oversight, protection of whistle-blowers, due process, strong sanctions, and full disclosure. In contrast, questionable practices raise issues about the value system and culture of science, and underscore the need for explicit dialogue and education. Governmental intervention is inappropriate for concerns regarding errors in collecting and interpreting data, incompetence, sloppiness, selection of data, authorship practices, multiple publications, and the like. The absence of consensus on the definition overtly undermines a primary goal of the report to achieve clear boundaries for the definition of misconduct in science. Third, the report does not stress sufficiently the importance of establishing a regularized institutional “response pathway” for allegations of mis-

conduct, and for considering problems stemming from institutional and individual conflict of interest. Problematic institutional responses are a common theme in complicated cases of misconduct in science; yet the crucial need for and intricate complexities of vigorous, prompt and fair responses to allegations, establishing an “open door ” from bench to Bethesda, are not emphasized. The report is weak in condemning the ALERT system of the Public Health Service which lists individuals because they are the subject of an investigation even though they should be presumed innocent. Finally, conflicts of interest directly related to research can be more complex, potentially more serious and perhaps more numerous than the examples of fabrication, falsification, and plagiarism, and therefore need to be addressed in this report.

Next: APPENDIXES »
Responsible Science: Ensuring the Integrity of the Research Process: Volume I Get This Book
× 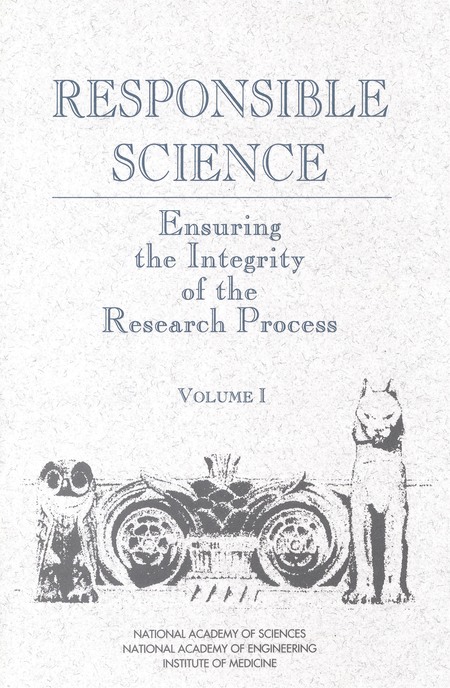 Responsible Science is a comprehensive review of factors that influence the integrity of the research process. Volume I examines reports on the incidence of misconduct in science and reviews institutional and governmental efforts to handle cases of misconduct.

The result of a two-year study by a panel of experts convened by the National Academy of Sciences, this book critically analyzes the impact of today's research environment on the traditional checks and balances that foster integrity in science.

Responsible Science is a provocative examination of the role of educational efforts; research guidelines; and the contributions of individual scientists, mentors, and institutional officials in encouraging responsible research practices.