Get This Book
Visit NAP.edu/10766 to get more information about this book, to buy it in print, or to download it as a free PDF.
« Previous: GLOSSARY
Page 173 Share Cite
Suggested Citation:"BIOGRAPHICAL INFORMATION ON COMMITTEE MEMBERS." National Research Council. 1992. DNA Technology in Forensic Science. Washington, DC: The National Academies Press. doi: 10.17226/1866.
×

VICTOR A. McKUSICK (Chairman) is University Professor of medical genetics at Johns Hopkins. He received his M.D. from the Johns Hopkins University School of Medicine. Dr. McKusick is the founding coeditor of the international journal GENOMICS and served as founding president of the Human Genome Organization (HUGO). Dr. McKusick is a member of the National Academy of Sciences and served as a member of the Academy's Committee on Mapping and Sequencing the Human Genome. He also belongs to the American Society for Clinical Investigation, Association of American Physicians, American Society of Human Genetics, American Philosophical Society, American Academy of Arts and Sciences, Royal College of Physicians (London), and Académie Nationale de Médecine (France).

C. THOMAS CASKEY is professor of medicine, biochemistry, and cell biology, at Baylor College of Medicine and Henry and Emma Meyer Professor in molecular genetics, director of the Institute for Molecular Genetics, and investigator of the Howard Hughes Medical Institute. He received his M.D. from Duke University. His research focuses on inherited disease and mammalian genetics. Dr. Caskey's professional affiliations include membership in the Institute of Medicine, National Academy of Sciences, American Society of Human Genetics, Human Genome Organization, and Association of American Physicians. He served as chairman of the Advisory Panel on Forensic Uses of DNA Tests, U.S. Congress Office of Technology Assessment. Dr. Caskey resigned from the committee on December 21, 1991.

PAUL B. FERRARA is director of the Virginia Division of Forensic Science. He holds Ph.D. degrees in organic chemistry from Syracuse University and from the State University of New York. After working as a research chemist for du Pont, Dr. Ferrara entered the field of forensic science in the Northern Virginia Police Laboratory, which became the Northern Virginia Regional Facility of the statewide Forensic Laboratory System. He is a charter member and past president of the Mid-Atlantic Association of Forensic Scientists, a member of the Executive Board of the American Society of Crime Laboratory Directors (ASCLD), and chairman of the DNA Implementation Committee of ASCLD.

MICHAEL W. HUNKAPILLER is vice president for science and technology and general manager of Applied Biosystems Inc. He holds a Ph.D. in chemical engineering from the California Institute of Technology. His research focuses on the automation of procedures used in the structural analysis and synthesis of proteins and DNA. Dr. Hunkapiller is the author of more than 100 publications and the inventor on more than 20 patents. His current professional activities include service on the editorial boards of Technique, Genomics, and Analytical Biochemistry , and he is a member of the American Association for the Advancement of Science, American Chemical Society, and Human Genome Organization. Dr. Hunkapiller resigned from the committee on August 17, 1990.

HAIG H. KAZAZIAN, JR. serves as director of the Center of Medical Genetics at Johns Hopkins University School of Medicine. He is the Frank Sutland Professor of pediatric genetics and professor of medicine and gynecology and obstetrics at the medical school and professor of biology at the university. His research has concentrated on mutation analysis in genetic diseases and he has had a long interest in DNA diagnosis of genetic disease. Dr. Kazazian has served on numerous NIH committees and editorial boards. He is a member of the American Pediatric Society, American Society of Clinical Investigation, Association of American Physicians, and the American Society of Human Genetics.

MARY-CLAIRE KING is professor of epidemiology in the School of Public Health of the University of California, Berkeley and of genetics in the Department of Molecular and Cell Biology. She holds a Ph.D. in genetics from the University of California, Berkeley. Dr. King's expertise is in human genetics, genetic epidemiology, and population genetics. Her professional affiliations include membership in many NIH committees and the American Association for the Advancement of Science, American Epidemiological Society, Society for Epidemiological Research, and American Society of Human Genetics.

ERIC S. LANDER is a member of the Whitehead Institute for Biomedical Research, associate professor of biology at the Massachusetts Institute of Technology, and director of the MIT Center for Genome Research. He received his A.B. in mathematics from Princeton University and his Ph.D. in mathematics from Oxford University. Dr. Lander's expertise is in human and mouse genetics, molecular biology, population genetics, mathematics, and statistics. He has been a MacArthur Fellow for research in human genetics and a Rhodes Scholar. He has been a member of numerous NIH committees and has chaired the Genome Research Review Committee for the National Center for Human Genome Research. He also served on the Advisory Panel on Forensic Uses of DNA Tests for the U.S. Congress Office of technology Assessment. Other professional activities include service on the editorial boards of GENOMICS, Mammalian Genome, Theoretical Population Biology, BioTechniques, and PCR Methods and Applications.

HENRY C. LEE serves as director of the Forensic Science Laboratory of the Connecticut State Police and professor of forensic science at the University of New Haven. He received an M.S. and a Ph.D. in biochemistry from New York University. Dr. Lee has been editor of the Hua-Lian Daily News and captain at the Taipei Police Headquarters in Taiwan. He has conducted special training activities in the various components of forensic science. His professional memberships include those in the American Academy of Forensic Science, American Society of Crime Laboratory Directors, International Association of Forensic Science, Forensic Science Society (England), New York Academy of Science, and International Homicide Detective Association.

RUTH MACKLIN serves as professor of bioethics in the Department of Epidemiology and Social Medicine at the Albert Einstein College of Medicine. She received her M.A. and Ph.D. in philosophy from Case Western Reserve University. Dr. Macklin has published on medical ethics, and her

list of honors and awards includes an American Council of Learned Societies fellowship and elected membership in the Institute of Medicine.

THOMAS G. MARR serves as senior staff investigator at the Cold Spring Harbor Laboratory. He received his M.S. and Ph.D. in biology from Michigan State University. The subjects of Dr. Marr's research studies include molecular genetics analysis and databases. He is a member of the Human Genome Joint Informatics Task Force, NIH/DOE, as well as the Technical Advisory Group-Genome Database, Howard Hughes Medical Institute/The Johns Hopkins University. Dr. Marr sits on the editorial board of Mammalian Genome, and his other professional affiliations include membership in the American Statistical Association, Association for Computing Machinery, and Institute of Electrical and Electronic Engineers.

PHILIP R. REILLY is executive director of the Shriver Center for Mental Retardation. He received his J.D. from Columbia University and his M.D. from Yale University. Dr. Reilly has written numerous articles and several books, including Genetics, Law, and Social Policy . He lectures on ethical issues in genetic testing, paternity litigation, and DNA forensic science. Dr. Reilly also served as a member of the National Research Council Committee on Public Information in the Prevention of Occupational Cancer.

JACK B. WEINSTEIN is U.S. district judge for the Eastern District of New York. He has published treatises, books, and articles, primarily on evidence and procedures. He is adjunct professor at the Columbia and Brooklyn law schools. He served on the National Research Council Committee on Statistics and Law.

Next: PARTICIPANTS »
DNA Technology in Forensic Science Get This Book
× 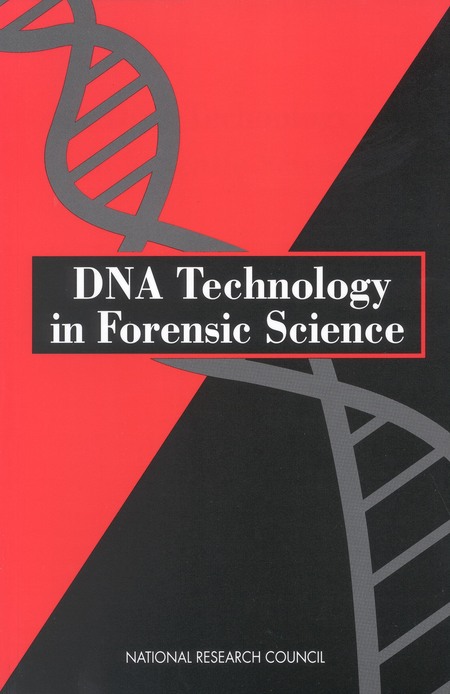 Matching DNA samples from crime scenes and suspects is rapidly becoming a key source of evidence for use in our justice system. DNA Technology in Forensic Science offers recommendations for resolving crucial questions that are emerging as DNA typing becomes more widespread.

Combining this original volume with the new update—The Evaluation of Forensic DNA Evidence—provides the complete, up-to-date picture of this highly important and visible topic.