Visit NAP.edu/10766 to get more information about this book, to buy it in print, or to download it as a free PDF.
« Previous: 5. Toxic Hazard Assessment
Page 51 Share Cite
Suggested Citation:"6. Fire Risk Assessment." Transportation Research Board and National Research Council. 1991. Fires in Mass Transit Vehicles: Guide for the Evaluation of Toxic Hazards. Washington, DC: The National Academies Press. doi: 10.17226/1869.
×

6 FIRE RISK ASSESSMENT Fire risk assessment methodology relates hazard modeling to actual fire fatality experience. The element of probability is added, and the prediction of life loss in specific fire scenarios Is attempted. Risk assessment is the latest technology for estimating the impact of both new and existing products on life safety in a fire. The fire risk assessment method of most significance in the United States is one developed by a consortium of investigators and funding entities coordinated by the National Fire Protection Research Foundation. According to the developers, the methodology is intended to be an aid to, and not a substitute for, the judgment of fire professionals. It is not in itself a basis for regulation. 1990~. The method is characterized by the following discrete procedural steps (Clarke et al., Step Choosing the Product. The product to be studied must have an analogue in current use from which it may differ in fire properties and size but not in intended use or location. It should appear specifically or be contained in the list of items first ignited that is used in the National Fire Protection Association 901 Fire Reporting System. · Step 2 Identifying the Occupancy Characteristics. This step identifies and describes one or more occupancies in which the fires involving the product occur. The first task is to decide on the number needed. The calculated fire risk for each is weighted by its estimated contribution to the makeup of the whole occupancy class. · Step 3Scenario Generation Relating Fire Severity to Fire Frequency. The extent of flame spread for each incident is used to infer quantitative information about its severity. This is done by assigning a maximum upper-layer temperature according to the extent of spread and defining a heat release rate curve with a shape that produces the 51

52 .. temperature profile required. The heat release curve is used as the basis for modeling the scenario. Since the frequency of the modeled scenarios is known, the result is a way to marry frequency with severity, that is, a way to calculate risk. · Step 4 Designing the Fire Model. The fire model relates the characteristics of the product and occupancy to the severity of the fires. The mode! used is FAST (fire and smoke transport), developed by the Center for Fire Research, National Institute of Standards and Technology. The FAST model uses as input the heat release rate curve from the room of fire origin developed in Step 3. The parameters needed to specify a product's contribution to fire growth are rate of heat release, heat of combustion, peak heat release rate, mass optical density of the smoke produced, and the toxicity of the smoke. For smolder-prone materials, a product's resistance to cigarette ignition is also required. To deal with scenarios in which a product is secondarily ignited from another item, the measured ignition flux needed to ignite the product is required. The FAST mode! computes the temperature and movement of smoke throughout the occupancy as a function of time. The TENAB (tenability) mode! uses three criteria to terminate escape activity: accumulated thermal burden, sufficiency of heat to cause severe thermal injury, and inhalation of a lethal dose of smoke. Tenability criteria do not change for different occupants or from case to case. Occupants are followed through the occupancy, and the temperature, radiant heat flux, and smoke concentration to which they are exposed are continuously recorded. When one of the criteria for cessation of escape is exceeded, escape is stopped. If the occupants are still inside the structure at this point, they are considered fatalities. Step 5 Describing and Predicting Escape of Occupants. The occupants of the structure are described in terms of the speed with which they move, their capacity for unaided escape, and the ease with which they are alerted. One set of such parameters characterizes healthy adults; another describes the elderly, another the handicapped, and so forth. The building population is then described by the number of each type of occupant it contains. Each assembly of potential building occupants Is called an occupant set. The likelihood that a building will actually contain a population with the characteristics of any given occupant set is the statistical occurrence of that occupant set in the population. The escape behavior of occupants is describer! using available exit models. For residences, a previously existing behavioral model, EXIT, Is used to predict the time needed for occupants to escape. For other occupancies, a simple empirically based flow monies may be used to estimate the same parameter. Execution of the method is done in three sequential steps. · Step 6 Calibrating the Model: The Base Case. The fire properties associated with one or more prototype products are described based on the assumption that society's use of the prototypes has given rise to whatever fire experience is reported. The expected number of deaths per fire is calculated scenario by scenario via the mode! developed in Steps 4 and 5, and the total number of deaths is computed by weighting the results for each scenario by the number of times it is reported to occur. This is the base case. · Step 7 Predicting the Fire Risk for a New Product. Once a satisfactory representation of the base case has been obtained, the same hard mode! is used to predict the risk associated with a product having any specified set of fire properties by replacing the properties of the prototype base case product with those representing the new or test

53 product. The other data used are unchanged. The method yields a predicted number of fire deaths associated with the changed set of fire properties. Step 8 Sensitivity Analysis and Test of Assumptions. The results are compared and analyzed. Inordinate sensitivities of the results to a particular fire property, assumption, or assignment are identified, and any consequences this has are noted. Fire risk assessment methodology has been applied to four occupancy-product pairs: furnishings in residences, carpets in offices, concealed combustibles in hotels, and .. . . . , ._ . .. . . . . ~ . . . class; wa~cover~ngs In restaurants. only the residential t~urn~sh~ngs case, with weil-defined occupancy characteristics and ample fire fatality experience data, could be regarded as relatively successful. The other three cases suffered from both a lack of real fire experience, as well as less well characterized occupancy detail, and were, therefore, less satisfactory in the prediction of fatalities. Although the methodology of fire risk assessment is still developmental, it has significant potential. Those using the method in the future may expect it to be most rewarding for cases that fit well with the assumptions on which the method is based and for which experience and market-related data are most abundant. A properly formulated case will produce the most credible results if 1. the occupancy-product pair under study is a homogeneous, well-characterized 2. the structure is likely to be confined to a fairly narrow size range and/or its population does not increase directly with its size; - 3. the occupant population is well-characterized; 4. the dimensions of the structure's rooms are of the order of a few (i.e.' less than 10) meters, rather than in the range of tens or hundreds of meters; and 5. the transport of fire and smoke can be treated by documented modeling methods. CONCLUSION Ultimately, fire risk assessments might be used in the evaluation of the life safety impact of materials used in Sit vehicles. Although case studies of materials used in transit vehicles would appear to match well with the criteria for credible use of fire risk assessment, Validation of the methodology is limited by the small number of fatal incidents in uncontrolled fires. REFERENCE Clarke, F. B., R. W. Bukowski, S. W. Stiefel, I. R. Hall, Ir., and S. A. Steele. 1990. The National Fire Risk Assessment Research Project: Final Report, National Fire Protection Research Foundation, Quincy, MA.

Next: Appendix A: Recommended Fire Safety Practices for Rail Transit Materials Selection »
Fires in Mass Transit Vehicles: Guide for the Evaluation of Toxic Hazards Get This Book
× 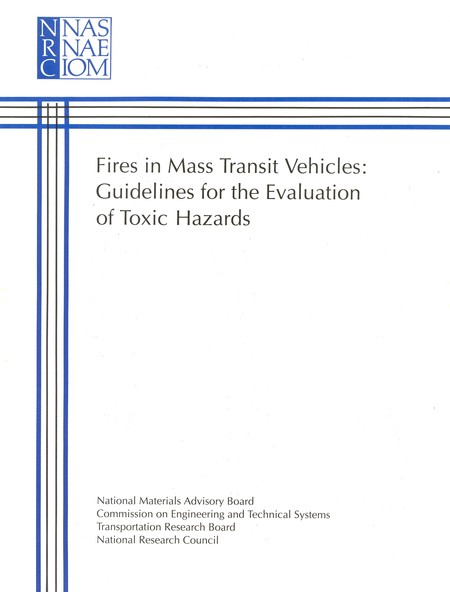