Get This Book
Visit NAP.edu/10766 to get more information about this book, to buy it in print, or to download it as a free PDF.
Page i Share Cite
Suggested Citation:"Front Matter." Transportation Research Board and National Research Council. 2014. Reducing the Fuel Consumption and Greenhouse Gas Emissions of Medium- and Heavy-Duty Vehicles, Phase Two: First Report. Washington, DC: The National Academies Press. doi: 10.17226/18736.
×

Committee on Assessment of Technologies and Approaches for Reducing the Fuel Consumption of
Medium- and Heavy-Duty Vehicles, Phase Two

This study was supported by cooperative agreement DTNH22-12-H-00389 between the National Academy of Sciences and the U.S. Department of Transportation, National Highway Traffic Administration. Any opinions, findings, conclusions, or recommendations expressed in this publication are those of the author(s) and do not necessarily reflect the views of the organizations or agencies that provided support for the project.

Copyright 2014 by The National Academy of Sciences. All rights reserved.

The Institute of Medicine was established in 1970 by the National Academy of Sciences to secure the services of eminent members of appropriate professions in the examination of policy matters pertaining to the health of the public. The Institute acts under the responsibility given to the National Academy of Sciences by its congressional charter to be an adviser to the federal government and, upon its own initiative, to identify issues of medical care, research, and education. Dr. Victor J. Dzau is president of the Institute of Medicine.

COMMITTEE ON ASSESSMENT OF TECHNOLOGIES AND APPROACHES FOR REDUCING THE FUEL CONSUMPTION OF MEDIUM- AND HEAVY-DUTY VEHICLES, PHASE TWO

JAMES J. ZUCCHETTO, Director, Board on Energy and Environmental Systems

ALAN CRANE, Senior Scientist, Board on Energy and Environmental Systems

DANA CAINES, Financial Manager, Board on Energy and Environmental Systems

BOARD ON ENERGY AND ENVIRONMENTAL SYSTEMS

The fuel consumption and greenhouse gas (GHG) emissions of medium- and heavy-duty vehicles (MHDVs) have become a focus of legislative and regulatory action in the past few years. Section 101 of the Energy Independence and Security Act of 2007 (EISA 2007), Pub. L No. 110-140 §101, mandated the U.S. Department of Transportation to promulgate fuel consumption standards for MHDVs for the first time. In addition, Section 108 of that same Act required the Secretary of Transportation to contract with the National Academy of Sciences to undertake a study on the technologies and costs for improving fuel consumption in MHDVs and prepare follow-on reports at 5-year intervals.

In response to the Secretary’s request, the National Research Council (NRC) in 2010 completed Technologies and Approaches to Reducing the Fuel Consumption of Medium- and Heavy-Duty Vehicles, referred to henceforth as the Phase One Report. The Phase One Report provided a series of findings and recommendations on the following: the development of a fuel consumption program for MHDVs; metrics for measuring MHDV fuel consumption; availability and costs of various technologies for reducing fuel consumption; potential indirect effects and externalities associated with fuel consumption standards for MHDVs; alternatives for the scope, stringency, certification methods, and compliance approach for the standards; and a suggested demonstration program to validate innovative certification procedures and regulatory elements.

Thereafter, in 2011, the National Highway Traffic Safety Administration (NHTSA) and the U.S. Environmental Protection Agency issued the Phase I Rule on fuel consumption and GHG emissions of MHDVs.

This report comprises the first periodic, 5-year follow-on to the NRC’s 2010 report. The NRC formed the Committee on Technologies and Approaches for Reducing the Fuel Consumption of Medium- and Heavy-Duty Vehicles, Phase Two, for this purpose.

In the present report, the committee seeks to advise NHTSA as it revises its regulatory regime for MHDVs that meets the two agencies’ objectives of (1) reducing in-use emissions of carbon dioxide from MHDVs; (2) reducing in-use emissions of other GHGs from MHDVs; and (3) improving in-use efficiency of fuel use in MHDVs—by driving innovation, advancement, adoption, and in-use balance of technology through regulation. At the same time, the committee seeks to advise on pathways to accomplish this, subject to the following constraints: (a) holding life-cycle cost of technology change or technology addition to an acceptable level; (b) holding capital cost of acquiring required new technology to an acceptable level; (c) acknowledging the importance of employing a balance of energy resources that offers national security; (d) avoiding near-term, precipitous regulatory changes that are disruptive to commercial planning; (e) ensuring that the vehicles offered for sale remain suited to their intended purposes and meet user requirements; (f) ensuring that the process used to demonstrate compliance is accurate, efficient, and not excessively burdensome; and (g) not eroding control of criteria pollutants or unregulated species that may have health effects.

Objectives 1, 2, and 3 are not fully congruent when fuels having different carbon content are considered, and when GHGs other than carbon dioxide are considered. In particular, GHG and efficiency are decoupled when the fuel and engine technology changes. Objectives 1, 2 and 3 also require that any regulation must reflect real-world activity and performance of vehicles. Constraints (a) and (b) suggest that the regulation and standards may stop short of driving best available technology or certain technology pathways. However, (a) and (b) do not go so far as to suggest that new technology must offer a positive return on investment for the consumer through reduced fuel usage: Needs for efficiency and GHG reduction may reach beyond economic drivers for change. Constraints (c), (d), and (e) may dictate that a single standard may not be reasonable because a mix of fuels may be needed and because these different fuels may not be capable of meeting a common standard if the standard is set too ambitiously. Constraint (f) may be in conflict with the

real-world benefit implications of the objectives. Constraints (c) and (d) imply that the regulations should not close current or anticipated technology pathways without adequate notice to manufacturers and suppliers.

The committee is grateful to all of the federal agencies, original equipment manufacturers, suppliers and their respective associations, and nongovernmental organizations whose staff contributed significantly of their time and efforts to this NRC study, either by giving presentations at committee meetings or by responding to committee requests for information.

This report has been reviewed in draft form by individuals chosen for their diverse perspectives and technical expertise, in accordance with procedures approved by the NRC’s Report Review Committee. The purpose of this independent review is to provide candid and critical comments that will assist the institution in making its published report as sound as possible and to ensure that the report meets institutional standards for objectivity, evidence, and responsiveness to the study charge. The review comments and draft manuscript remain confidential to protect the integrity of the deliberative process. We wish to thank the following individuals for their review of this report:

Art Fraas, Resources for the Future,

Although the reviewers listed above have provided many constructive comments and suggestions, they were not asked to endorse the conclusions or recommendations nor did they see the final draft of the report before its release. The review of this report was overseen by Elisabeth M. Drake, NAE, Massachusetts Institute of Technology. Appointed by the NRC, she was responsible for making certain that an independent examination of this report was carried out in accordance with institutional procedures and that all review comments were carefully considered. Responsibility for the final content of this report rests entirely with the authoring committee and the institution.

Committee on Assessment of Technologies and Approaches for Reducing the Fuel Consumption of Medium- and Heavy-Duty Vehicles, Phase Two

Metrics Used in the Regulation

Classes of Vehicles to Regulate

Pilot Program and Evolution of the Regulatory Regime

Overview of Medium- and Heavy-Duty Vehicles (Classes 2b Through 8)

Use of GEM for Over-the-Road Tractors

Fixed Values in the GEM Code

4      BASELINE INFORMATION ON MHDV FLEET AND METHODOLOGY FOR COLLECTION

Why Do We Need a Baseline? NHTSA Should Have a Baseline in Order to Inform Its Rulemaking

What Is a Baseline?

Which Year Should the Baseline Capture?

Which Data Should the Baseline Contain?

Comments on the CalHEAT Report for the California Energy Commission

Annex 4A: Other Sources of Baseline Data in the Industry

Annex 4B: Additional Ways to Obtain Information in the Future

Summary of Supply and Demand Trends for Natural Gas Fuel

6      REVIEW OF OPTIONS TO REDUCE ENERGY USE OF TRAILERS

Aerodynamics and Tire Rolling Resistance of the Tractor-Trailer

Aerodynamics of the Combined Tractor-Trailer

Current Use of Aerodynamic Devices and Low-Rolling-Resistance Tires

Barriers to Increased Use of Trailer Aerodynamic Devices

Annex 6A: Questions Posed to Van Trailer Manufacturers to Gather Information for Table 6-5

Next: Summary »
Reducing the Fuel Consumption and Greenhouse Gas Emissions of Medium- and Heavy-Duty Vehicles, Phase Two: First Report Get This Book
× 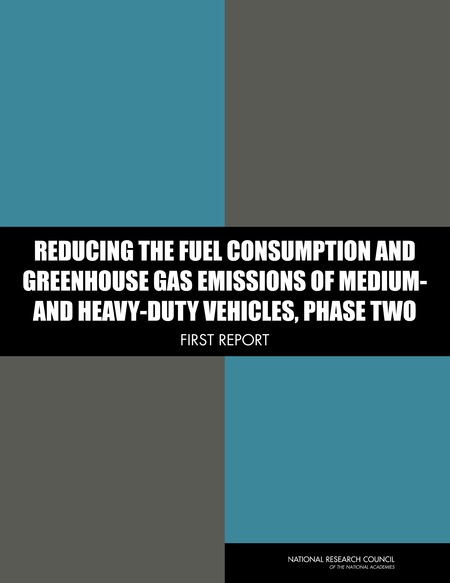 Medium- and heavy-duty trucks, motor coaches, and transit buses - collectively, "medium- and heavy-duty vehicles", or MHDVs - are used in every sector of the economy. The fuel consumption and greenhouse gas emissions of MHDVs have become a focus of legislative and regulatory action in the past few years. Reducing the Fuel Consumption and Greenhouse Gas Emissions of Medium- and Heavy-Duty Vehicles, Phase Two is a follow-on to the National Research Council's 2010 report, Technologies and Approaches to Reducing the Fuel Consumption of Medium-and Heavy-Duty Vehicles. That report provided a series of findings and recommendations on the development of regulations for reducing fuel consumption of MHDVs.

This report comprises the first periodic, five-year follow-on to the 2010 report. Reducing the Fuel Consumption and Greenhouse Gas Emissions of Medium- and Heavy-Duty Vehicles, Phase Two reviews NHTSA fuel consumption regulations and considers the technological, market and regulatory factors that may be of relevance to a revised and updated regulatory regime taking effect for model years 2019-2022. The report analyzes and provides options for improvements to the certification and compliance procedures for medium- and heavy-duty vehicles; reviews an updated analysis of the makeup and characterization of the medium- and heavy-duty truck fleet; examines the barriers to and the potential applications of natural gas in class 2b through class 8 vehicles; and addresses uncertainties and performs sensitivity analyses for the fuel consumption and cost/benefit estimates.