Get This Book
Visit NAP.edu/10766 to get more information about this book, to buy it in print, or to download it as a free PDF.
« Previous: 4 Intermediary Organizations and Scale-Up
Page 47 Share Cite
Suggested Citation:"5 Expanding Programs Internationally." Institute of Medicine and National Research Council. 2014. Strategies for Scaling Effective Family-Focused Preventive Interventions to Promote Children's Cognitive, Affective, and Behavioral Health: Workshop Summary. Washington, DC: The National Academies Press. doi: 10.17226/18808.
×

Several family-focused programs developed in the United States have been implemented internationally, including the Triple P-Positive Parenting Program, Family Check-Up, and the Nurse–Family Partnership. To offer an international perspective on implementation, Terje Ogden from the Norwegian Center for Child Behavioral Development described the challenges and successes of implementing in Norway the Parent Management Training-Oregon (PMTO) model, a behavior intervention program that provides parents with learning experiences related to parenting skills in five areas, including encouragement, discipline, monitoring, problem solving, and positive involvement.1 Norway, as well as other countries in Scandinavia, have been highly receptive to empirically supported interventions for children, youth, and families, according to Ogden.

There is long-term governmental funding of the national implementation and research on evidence-based interventions in Norway, but also a high level of autonomy at the practitioner level and in the local communities. In 1999, the Norwegian government launched an initiative aimed at increasing the capacity and the competence of its child and adolescent service system to address the challenges of child conduct problems. The specific goal of this initiative was to decrease the use of incarcerations and

1The expansion to other countries of additional family-focused programs discussed in this report (e.g., the Triple P-Positive Parenting Program, Family Check-Up, and the Nurse–Family Partnership) was not discussed at the workshop and by extension is not discussed in this chapter. In addition to these programs, which were developed in the United States, there is much to be learned from family-focused programs that were developed in other countries.

out-of-home placements of children due to serious behavior problems by implementing family-based empirically supported interventions, such as PMTO. This initiative led to the creation of Norway’s Nationwide Implementation Strategy, which Ogden helped develop. The strategy created the Center for Child Behavioral Development, whose aim is to develop, implement, and evaluate evidence-based interventions.

The center built an implementation infrastructure that had national implementation teams and combined a top-down with a bottom-up approach. Ogden noted that experts at the center selected the programs “we thought were the right ones to put our stakes on,” and defined the structure of the implementation. But the center then relied on the motivation of practitioners, who volunteered to participate in the training and were promised by their agency leaders to have time to practice in the program after their training was completed (Ogden et al., 2005). Trainees were recruited through the regular child and adolescent services across Norway. There were procedures for the sustained recruitment, training, supervision, and evaluation of practitioners, and also for the implementation, maintenance, and quality assurance of empirically supported programs. Norway has five health regions, and each had implementers from the center who offered training.

Recognizing the concern that a program such as the PMTO model might work in the United States but not in Norway, the center did a small-scale and then a large-scale effectiveness study of the intervention, which replicated the findings in the United States with the intervention (Amlund-Hagen et al., 2011; Ogden and Amlund-Hagen, 2008). The center also conducted a large-scale implementation study of PMTO in order to examine the sustainability of implementation quality and treatment fidelity across three generations of therapists (Forgatch and DeGarmo, 2011) and over time (Hukkelberg and Ogden, 2013). These studies, which used videotaped observations of therapists’ interactions with families, found there was high fidelity to the original program with no attenuation of effects, despite heterogeneity among the service providers and the treatment population, even after several successive generations of therapists were trained.

Ten years after starting the implementation of the PMTO in Norway, a randomized study found that there was successful implementation of competency drivers, such as training, supervision, and evaluation of practice, but the implementation was not as successful at integrating the program with the usual services offered in Norway, which tend not to be evidence based (Ogden et al., 2012). “Looking at these outcomes we decided we are going to have to work more with the local organizations in order to blend in the evidence-based practices with the usual services they offer,” Ogden said.

When PMTO was first implemented in Norway in 2002, it was provided to 200 families. It now serves around 3,000 parents or families in Norway each year, Ogden reported, adding, “The politicians are very happy about this development.” Later during discussion, Lauren Supplee asked if there have been any changes in psychiatric diagnoses, health care costs, incarceration costs, and so on owing to the effects of the PMTO program in Norway. Ogden responded that there have been encouraging signs of such changes, including a drop in law-breaking behavior among youths, but it has not been shown that the program is necessarily the cause of those changes.

When William Beardslee from Boston Children’s Hospital and Harvard Medical School asked Ogden to compare the differences between scale implementation that occurs in the Norwegian system versus the American system, he responded, “What impresses me when I come to America are the breakthroughs. You are cutting edge on research, you are developing new programs, new methods, new approaches that are highly impressive, so we come to you for inspiration. But you are not that good at carry-through, so when you’re going to implement these programs, models, and approaches you export them to Europe and other countries. I think what is lacking is some kind of implementation infrastructure in the United States so your own children and youth can benefit from your tremendous high-quality research.”

Thomas Dishion added during his presentation that Sweden has taken up Family Check-Up quickly and effectively, with providers getting high-fidelity ratings. “I attribute that to a high level of training in the supervisors. Most of the time when I do trainings there, they have all had exposure to many of our programs, such as The Incredible Years®, Triple P, Functional Family Therapy, and so on. They are exposed to a lot of the evidence-based practices,” Dishion said. 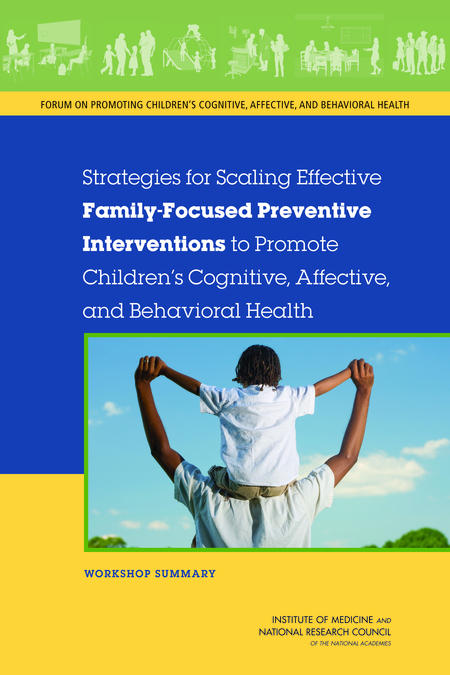 Over the last three decades, researchers have made remarkable progress in creating and testing family-focused programs aimed at fostering the cognitive, affective, and behavioral health of children. These programs include universal interventions, such as those for expecting or new parents, and workshops for families whose children are entering adolescence, as well as programs targeted to especially challenged parents, such as low-income single teens about to have their first babies, or the parents of children with autism. Some family-focused programs have been shown to foster significantly better outcomes in children, including enhanced educational performance, and reduced rates of teen pregnancy, substance abuse, and child conduct and delinquency, as well as reduced child abuse. The favorable cost-benefit ratios of some of these programs are due, in part, to the multiple and far-ranging effects that family-focused prevention programs targeting children can have. Other family-focused programs have shown success in smaller academic studies but have not been widely applied, or have not worked as effectively or failed when applied to more diverse real-world settings.

Strategies for Scaling Effective Family-Focused Preventive Interventions to Promote Children's Cognitive, Affective, and Behavioral Health is the summary of a workshop convened by the Institute of Medicine Forum on Promoting Children's Cognitive, Affective, and Behavioral Health to explore effective preventive interventions for youth that can modify risk and promote protective factors that are linked to mental, emotional, and behavioral health, and how to apply this existing knowledge. Based on the 2009 report Preventing Mental, Emotional, and Behavioral Disorders Among Young People, this report considers how to build a stronger research and practice base around the development and implementation of programs, practices, and policies that foster children's health and well-being across the country, while engaging multi-sectorial stakeholders. While research has advanced understanding of risk, promotive, and protective factors in families that influence the health and well-being of youth, a challenge remains to provide family-focused interventions across child and adolescent development at sufficient scale and reach to significantly reduce the incidence and prevalence of negative cognitive, affective, and behavioral outcomes in children and adolescents nationwide, as well as to develop widespread demand for effective programs by end users. This report explores new and innovative ways to broaden the reach and demand for effective programs and to generate alternative paradigms for strengthening families.