Progress Toward Restoring the Everglades: The Fifth Biennial Review: 2014 (2014)

Get This Book
Visit NAP.edu/10766 to get more information about this book, to buy it in print, or to download it as a free PDF.
« Previous: Summary
Page 13 Share Cite
Suggested Citation:"1 Introduction." National Research Council. 2014. Progress Toward Restoring the Everglades: The Fifth Biennial Review: 2014. Washington, DC: The National Academies Press. doi: 10.17226/18809.
×

The Florida Everglades, formerly a large and diverse aquatic ecosystem, has been dramatically altered over the past century by an extensive water control infrastructure designed to increase regional economic productivity through improved flood control, urban water supply, and agricultural production (Davis and Ogden, 1994; NRC, 2005). Shaped by the slow flow of water, its vast terrain of sawgrass plains, ridges, sloughs, and tree islands supported a high diversity of plant and animal habitats. This natural landscape also served as a sanctuary for Native Americans. However, large-scale changes to the landscape have diminished the natural resources, and by the mid- to late-20th century, many of the area’s defining natural characteristics had been lost. The remnants of the original Everglades (see Figure 1-1 and Box 1-1) now compete for vital water with urban and agricultural interests, and contaminated runoff from these two activities impairs the South Florida ecosystem.

Recognition of past declines in environmental quality, combined with continuing threats to the natural character of the remaining Everglades, led to initiation of large-scale restoration planning in the 1990s and the launch of the Comprehensive Everglades Restoration Plan (CERP) in 2000. This unprecedented project envisioned the expenditure of billions of dollars in a multidecadal effort to achieve ecological restoration by reestablishing the hydrologic characteristics of the Everglades, where feasible, and to create a water system that simultaneously serves the needs of both the natural and the human systems of South Florida. Within the social, economic, and political latticework of the 21st century, restoration of the South Florida ecosystem is now under way and represents one of the most ambitious ecosystem renewal projects ever conceived. This report represents the fifth independent assessment of the CERP’s progress by the Committee on Independent Scientific Review of Everglades Restoration Progress (CISRERP) of the National Research Council (NRC). 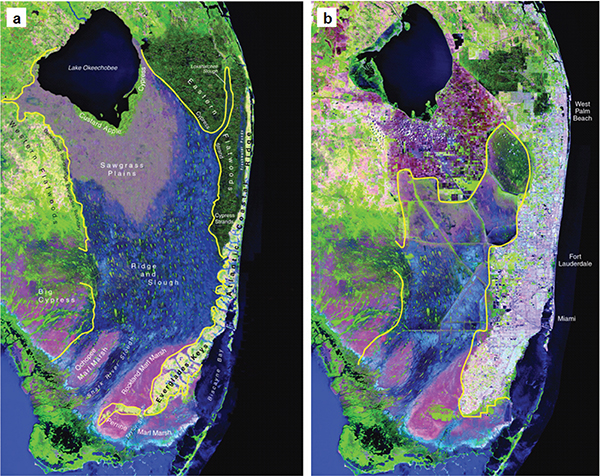 The NRC has been providing scientific and technical advice related to the Everglades restoration since 1999. The NRC’s Committee on the Restoration of the Greater Everglades Ecosystem (CROGEE), which operated from 1999 until 2004, was formed at the request of the South Florida Ecosystem Restoration Task Force (Task Force), an intergovernmental body established to facilitate

This box defines some key geographic terms used throughout this report.

• The original, historical, or pre-drainage Everglades refers to the areas of sawgrass, marl prairie, and other wetlands and estuaries south of Lake Okeechobee that existed prior to the construction of drainage canals beginning in the late 1800s (Figure 1-1a).

The Water Conservation Areas (WCAs) include WCA-1 (the Arthur R. Marshall Loxahatchee National Wildlife Refuge), WCA-2A and -2B, -3A, and -3B (see Figure 1-2).

• The Everglades Protection Area is defined in the Everglades Forever Act as comprising WCA-1, -2A, -2B, -3A, and -3B and Everglades National Park.

Many maps in this report include shorthand designations that use letters and numbers for engineered additions to the South Florida ecosystem. For example, canals are labeled C-#; levees and associated borrow canals as L-#; and structures, such as culverts, locks, pumps, spillways, control gates, and weirs, as S-# or G-#. 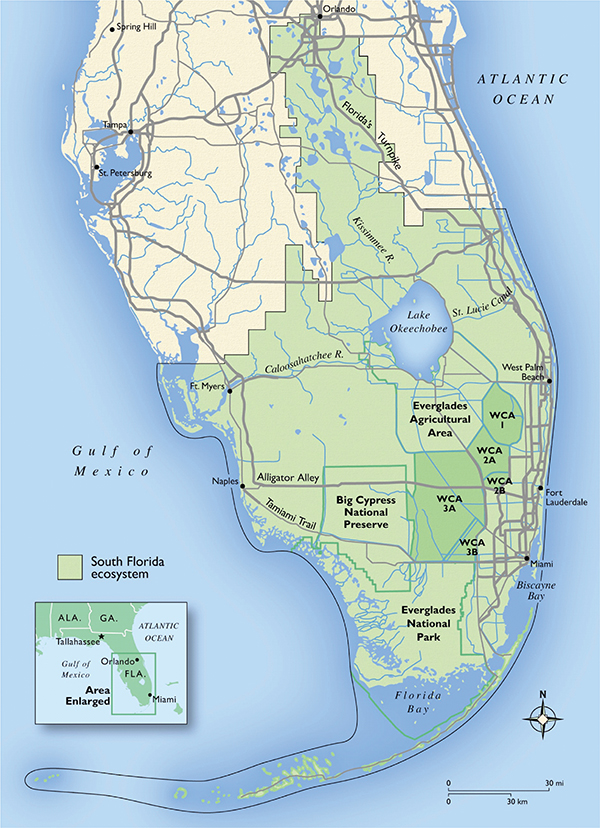 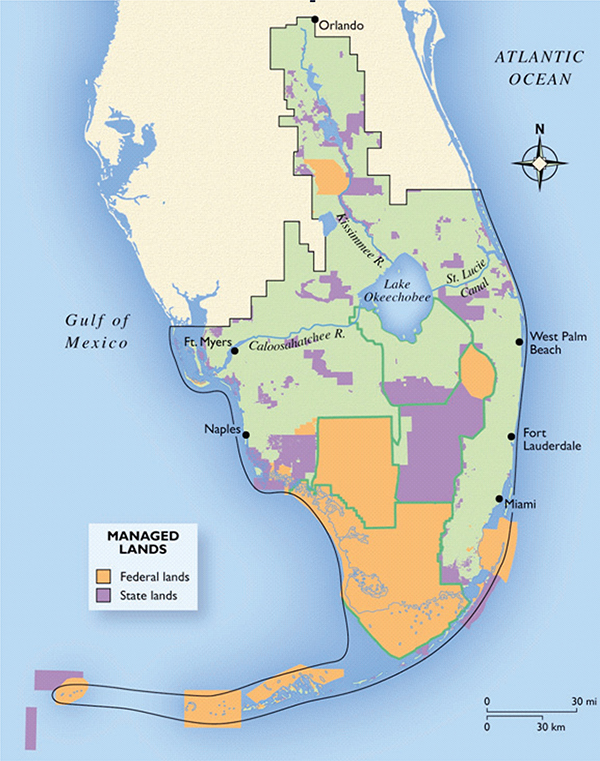 FIGURE 1-3 Land and waters managed by the State of Florida and the federal government as of December 2005 for conservation purposes within the South Florida ecosystem.

coordination in the restoration effort, and the committee produced six reports (NRC, 2001, 2002a,b, 2003a,b, 2005). The NRC’s Panel to Review the Critical Ecosystem Studies Initiative produced an additional report in 2003 (NRC, 2003c; see Appendix A). The Water Resources Development Act of 2000 (WRDA 2000) mandated that the U.S. Department of the Army, the Department of the Interior, and the State of Florida, in consultation with the Task Force, establish an independent scientific review panel to evaluate progress toward achieving the natural system restoration goals of the CERP. The NRC’s CISRERP was therefore established in 2004 under contract with the U.S. Army Corps of Engineers. After publication of each of the first four biennial reviews (NRC, 2007, 2008, 2010, 2012a; see Appendix A for the report summaries), some members rotated off the committee and some new members were added.

The committee is charged to submit biennial reports that address the following items:

1. An assessment of progress in restoring the natural system, which is defined by section 601(a) of WRDA 2000 as all of the land and water managed by the federal government and state within the South Florida ecosystem (see Figure 1-3 and Box 1-1);

2. A discussion of significant accomplishments of the restoration;

3. A discussion and evaluation of specific scientific and engineering issues that may impact progress in achieving the natural system restoration goals of the plan; and

Given the broad charge, the complexity of the restoration, and the continually evolving circumstances, the committee did not presume it could cover all issues that affect restoration progress in any single report. This report builds on the past reports by this committee (NRC, 2007, 2008, 2010, 2012a) and emphasizes restoration progress since 2012, high-priority scientific and engineering issues that the committee judged to be relevant to this time frame, and other issues that have impacted the pace of progress. The committee focused particularly on issues for which the “timing was right”—that is, where the committee’s advice could be useful relative to the decision-making time frames—and on topics that had not been fully addressed in past NRC Everglades reports. Interested readers should look to past reports by this committee (NRC, 2007, 2008, 2010, 2012a) to find detailed discussions of important topics, such as the human context for the CERP, water quality and quantity challenges and trajectories,

The committee met five times during the course of this review; received briefings at its public meetings from agencies, organizations, and individuals involved in the restoration, as well as from the public; and took several field trips to sites with restoration activities (see Acknowledgments) to help it evaluate restoration progress. In addition to information received at the meetings, the committee based its assessment of progress on information in relevant CERP and non-CERP restoration documents. The committee’s conclusions and recommendations also were informed by a review of relevant scientific literature and the experience and knowledge of the committee members in their fields of expertise. The committee was unable to consider in any detail new materials received after March 2014.

In Chapter 2, the committee provides an overview of the CERP in the context of other ongoing restoration activities and discusses the restoration goals that guide the overall effort.

In Chapter 3, the committee discusses progress in the Central Everglades Planning Project and presents its evaluation of the effort.

In Chapter 4, the committee analyzes the progress of CERP implementation, including recent developments at Picayune Strand, Biscayne Bay Coastal Wetlands, the C-111 Spreader Canal, and Indian River Lagoon-South and several pilot projects that are under way. Also discussed in the chapter are programmatic progress and issues, including funding, authorization, and sequencing.

In Chapter 5, the committee discusses the implications of climate change for Everglades restoration and recommends planning and research needs to address this issue.

In Chapter 7, the committee discusses the contributions and use of science for CERP decision making. The chapter focuses on science coordination, adaptive management, and science support for water quality improvements.

Next: 2 The Restoration Plan in Context »
Progress Toward Restoring the Everglades: The Fifth Biennial Review: 2014 Get This Book
× 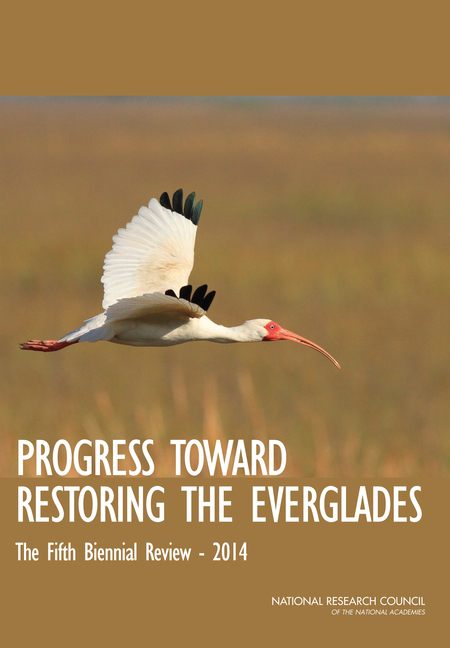 The Everglades ecosystem is vast, stretching more than 200 miles from Orlando to Florida Bay, and Everglades National Park is but a part located at the southern end. During the 19th and 20th centuries, the historical Everglades has been reduced to half of its original size, and what remains is not the pristine ecosystem many image it to be, but one that has been highly engineered and otherwise heavily influenced, and is intensely managed by humans. Rather than slowly flowing southward in a broad river of grass, water moves through a maze of canals, levees, pump stations, and hydraulic control structures, and a substantial fraction is diverted from the natural system to meet water supply and flood control needs. The water that remains is polluted by phosphorus and other contaminants originating from agriculture and other human activities. Many components of the natural system are highly degraded and continue to degrade.

Progress Toward Restoring the Everglades is the fifth biennial review of progress made in meeting the goals of the Comprehensive Everglades Restoration Plan (CERP). This complex, multibillion-dollar project to protect and restore the remaining Everglades has a 30-40 year timeline. This report assesses progress made in the various separate project components and discusses specific scientific and engineering issues that may impact further progress. According to Progress Toward Restoring the Everglades, a dedicated source of funding could provide ongoing long-term system-wide monitoring and assessment that is critical to meeting restoration objectives. The report makes recommendations for restoration activities, project management strategies, management of invasive nonnative species, and high-priority research needs.