Get This Book
Visit NAP.edu/10766 to get more information about this book, to buy it in print, or to download it as a free PDF.
Page i Share Cite
Suggested Citation:"Front Matter." National Research Council. 2014. The Flexible Electronics Opportunity. Washington, DC: The National Academies Press. doi: 10.17226/18812.
×

Any opinions, findings, conclusions, or recommendations expressed in this publication are those of the author and do not necessarily reflect the views of the organizations or agencies that provided support for the project.

The Institute of Medicine was established in 1970 by the National Academy of Sciences to secure the services of eminent members of appropriate professions in the examination of policy matters pertaining to the health of the public. The Institute acts under the responsibility given to the National Academy of Sciences by its congressional charter to be an adviser to the federal government and, upon its own initiative, to identify issues of medical care, research, and education. Dr. Victor J. Dzau is president of the Institute of Medicine.

Special Advisor to the Chancellor for Economic Development

University of Arkansas at Little Rock

Association of Public and Land-grant Universities

For the National Research Council (NRC), this project was overseen by the Board on Science, Technology, and Economic Policy (STEP), a standing board of the NRC established by the National Academies of Sciences and Engineering and the Institute of Medicine in 1991. The mandate of the Board on Science, Technology, and Economic Policy is to advise federal, state, and local governments and inform the public about economic and related public policies to promote the creation, diffusion, and application of new scientific and technical knowledge to enhance the productivity and competitiveness of the U.S. economy and foster economic prosperity for all Americans. The STEP Board and its committees marshal research and the expertise of scholars, industrial managers, investors, and former public officials in a wide range of policy areas that affect the speed and direction of scientific and technological change and their contributions to the growth of the U.S. and global economies. Results are communicated through reports, conferences, workshops, briefings, and electronic media subject to the procedures of the National Academies to ensure their authoritativeness, independence, and objectivity. The members of the STEP Board* and the NRC staff are listed below:

Department of Nuclear Science and Engineering

Professor of Business Administration and Economics

Some industry experts predict that the global market for flexible electronics will experience a double-digit growth rate, reaching $250 billion by 2025.1 However, most experts believe that the United States is not adequately poised to capitalize on this opportunity. A recent study commissioned by the National Science Foundation and the Office of Naval Research concluded that “the relatively low prevalence of actual manufacturing and advanced systems research and development in the United States has led to an incomplete hybrid flexible electronics R&D scenario for this country.”2 Furthermore, the report observed that “manufacturing is moving to regions of the world that provide greater investment and commitment to product development. It then becomes questionable as to whether this approach is a healthy one and can be sustained in the long term.”3

Responding to a congressional request, a committee of the National Research Council’s (NRC’s) Board on Science, Technology, and Economic Policy (STEP) has reviewed foreign and domestic innovation programs and their potential to advance the production of flexible electronics technologies. It has sought to understand their structure, focus, funding, and likely impact and to determine what appropriate steps the United States might consider to develop a robust flexible electronics industry. (See Box P-1.)

THE STEP BOARD’S RESEARCH ON
INNOVATION AND COMPETITIVENESS

Since 1991, the National Research Council, under the auspices of the Board on Science, Technology, and Economic Policy, has undertaken a program of activities to improve policy makers’ understandings of the interconnections of science, technology, and economic policy and their importance for the American economy and its international competitive position. The board’s activities have corresponded with increased policy recognition of the importance of knowledge

An ad hoc committee will examine and compare selected innovation programs both foreign and domestic, and their potential to advance the production of flexible electronics technology in the United States. The analysis, carried out under the direction of the committee, will include a review of the goals, concept, structure, operation, funding levels, and evaluation of foreign programs similar to major U.S. programs, e.g., innovation awards, S&T parks, and consortia. To assess these programs, the committee will convene a series of meetings to gather data from responsible officials and program managers, and encourage a systematic dissemination of information and analysis as a means of better understanding the transition of flexible electronics research into products and to identify specific recommendations to improve and to develop U.S. programs.

Specifically, the committee will examine the role of research consortia around the world to advance flexible electronics technology, comparing their structure, focus, funding, and likely impact, and determining what appropriate steps the United States might consider to develop the industry in the United States. This review will include the potential of the industry, the possible contributions of a consortium, and other measures contributing to the development of the industry in the United States. The committee will undertake workshops to carry out this analysis, prepare a workshop summary capturing the tacit knowledge expressed, commission additional analyses, and develop findings and recommendations for inclusion in the committee’s final consensus report.

and technology to economic growth. New economic growth theory emphasizes the role of technology creation, which is believed to be characterized by significant growth externalities.4 In addition, many economists have recognized the limitations of traditional trade theory, particularly with respect to the reality of imperfect international competition. Public–private partnerships are increasingly recognized for their contributions to the commercialization of state and national investments in research and development. Such partnerships help address the challenges associated with the transition of research into products ready for the marketplace.5

One important element of NRC analysis has concerned the growth and impact of foreign technology programs. U.S. competitors have launched substantial programs to support new technologies, small firm development, innovative production at large companies, and consortia among large and small firms to strengthen national and regional positions in sectors they consider strategic for the development of their economies. Some foreign governments have chosen to provide public support to research and the commercialization of that research to overcome the market imperfections apparent in their national innovation systems.6 They believe that the rising costs and risks associated with new potentially high-payoff technologies, and the growing global dispersal of technical expertise, underscore the need for national research and development programs to support new and existing high-technology firms within their borders.7

On behalf of the National Academies, we express our appreciation and recognition for the insights, experiences, and perspectives made available by the many participants of workshops and site visits held over the course of this study. We would particularly like to recognize Thomas Howell for his research and preparation of a draft of this report, and David Dierksheide and Karolina Konarzewska of the NRC staff for their assistance in preparing this report for publication.

7 For a review of the challenges and opportunities faced by the United States in the face of unprecedented global competition for developing, commercializing, and manufacturing the next generation of technologies, see National Research Council, Rising to the Challenge, U.S. Innovation Policy for the Global Economy, eds. C. Wessner and A. Wolff (Washington, DC: The National Academies Press, 2012).

This report has been reviewed in draft form by individuals chosen for their diverse perspectives and technical expertise, in accordance with procedures approved by the National Academies’ Report Review Committee. The purpose of this independent review is to provide candid and critical comments that will assist the institution in making its published report as sound as possible and to ensure that the report meets institutional standards for objectivity, evidence, and responsiveness to the study charge. The review comments and draft manuscript remain confidential to protect the integrity of the process.

Although the reviewers listed above have provided many constructive comments and suggestions, they were not asked to endorse the conclusions or recommendations, nor did they see the final draft of the report before its release. The review of this report was overseen by Elsa Garmire, Dartmouth College. Appointed by the National Academies, she was responsible for making certain that an independent examination of this report was carried out in accordance with institutional procedures and that all review comments were carefully considered. Responsibility for the final content of this report rests entirely with the authoring committee and the institution.

1 FLEXIBLE ELECTRONICS AND THE MANUFACTURING CHALLENGE

A Renewed Focus on Manufacturing

From Basic to Applied Research

The Potential for Applied Research Partnerships

Learning from the Sematech Experience

Overview of this Report

2 ASSESSING THE POTENTIAL OF FLEXIBLE ELECTRONICS

The East Asian Edge in Displays

The Flow of Technology to Asia

Next: Executive Summary »
The Flexible Electronics Opportunity Get This Book
× 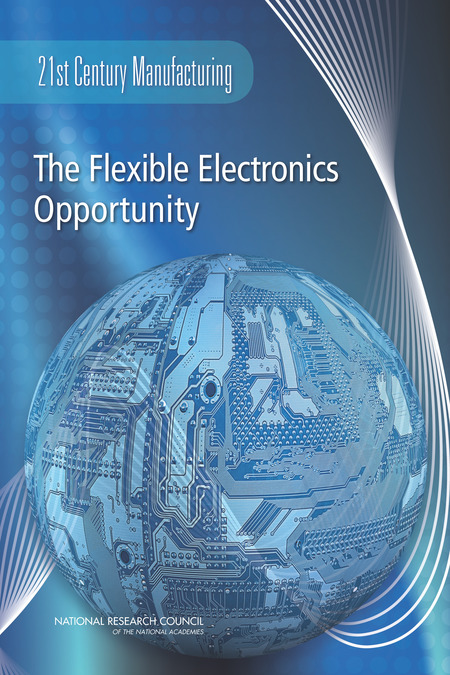 Flexible electronics describes circuits that can bend and stretch, enabling significant versatility in applications and the prospect of low-cost manufacturing processes. They represent an important technological advance, in terms of their performance characteristics and potential range of applications, ranging from medical care, packaging, lighting and signage, consumer electronics and alternative energy (especially solar energy.) What these technologies have in common is a dependence on efficient manufacturing that currently requires improved technology, processes, tooling, and materials, as well as ongoing research. Seeking to capture the global market opportunity in flexible electronics, major U.S. competitors have initiated dedicated programs that are large in scope and supported with significant government funding to develop and acquire these new technologies, refine them, and ultimately manufacture them within their national borders. These national and regional investments are significantly larger than U.S. investment and more weighted toward later stage applied research and development.

The Flexible Electronics Opportunity examines and compares selected innovation programs both foreign and domestic, and their potential to advance the production of flexible electronics technology in the United States. This report reviews the goals, concept, structure, operation, funding levels, and evaluation of foreign programs similar to major U.S. programs, e.g., innovation awards, S&T parks, and consortia. The report describes the transition of flexible electronics research into products and to makes recommendations to improve and to develop U.S. programs. Through an examination of the role of research consortia around the world to advance flexible electronics technology, the report makes recommendations for steps that the U.S. might consider to develop a robust industry in the United States.