India-United States Cooperation on Science and Technology for Countering Terrorism: Summary of a Workshop (2014)

Get This Book
Visit NAP.edu/10766 to get more information about this book, to buy it in print, or to download it as a free PDF.
« Previous: Front Matter
Page 1 Share Cite
Suggested Citation:"Synopsis." National Academy of Sciences. 2014. India-United States Cooperation on Science and Technology for Countering Terrorism: Summary of a Workshop. Washington, DC: The National Academies Press. doi: 10.17226/18960.
×

The terrorist attacks of September 11, 2001, in the United States and the terrorist attacks in Mumbai on November 26, 2008, significantly increased attention paid to the complexity of threats to safety and security around the world. Recognizing shared concerns, capabilities, and willingness to cooperate, the governments of India and the United States initiated a bilateral Homeland Security Dialogue in May 2011 with a visit by U.S. Department of Homeland Security Secretary Janet Napolitano to meet with Indian Minister of Home Affairs P. Chidambaram. The dialogue, which continues today, is a mechanism by which the two countries reaffirm their commitment to work cooperatively on law enforcement issues, to combat common threats, to improve bilateral cooperation through the development and application of innovative technology, to combat the flow of illicit finances and currency counterfeiting, and to work closely to counter terrorism and promote cybersecurity.1

To facilitate cooperation on science and technology to counter terrorism via the Homeland Security Dialogue and directly, the U.S. National Academy of Sciences and the National Institute for Advanced Studies (NIAS) organized and convened a workshop entitled “India-U.S. Workshop on Science and Technology for Countering Terrorism,” held February 3-5, 2014, in Bangalore, India, on the NIAS campus. The plan for the workshop is described succinctly in the statement of task in Box S-1.

GOALS AND OBJECTIVES FOR JOINT WORKSHOP

The workshop itself enabled Indian and U.S. experts to describe their work and plans for future activities on a breadth of scientific and technical areas relevant to countering terrorism, including Systems Approaches to Countering Terrorism; Security at Chemical Facilities; Agricultural and Food Security; Technical Aspects of Civilian Nuclear Material Security; Global Health Security and Strengthening

An ad hoc organizing committee under the auspices of the National Academy of Sciences (NAS) standing Committee on International Security and Arms Control (CISAC) will work with partner organizations in India to convene an Indian-U.S. workshop on science and technology for countering terrorism. The organizing committee and its counterpart in India will develop the workshop agenda, select and invite speakers and discussants, and moderate the discussions. The agenda will include topics to address biological threats (health and agriculture); protection of nuclear facilities; security (physical and cyber) for chemicals, chemical facilities and other critical infrastructure; and monitoring, surveillance, and emergency response. It will also include topics to identify and examine promising areas for further Indian-U.S. cooperation on science and technology for countering terrorism.

Public Health Infrastructures; Emergency Management and Response, An All Hazards Approach, Protecting Critical Infrastructure; Cybersecurity in its Complexity; the Challenges of Conventional Terrorism; and Forensics Capabilities during Response Phases, Attribution, and Perpetrator Prosecution. Overarching themes that emerged from the detailed discussions, and outlined thematically here in the synopsis, were the need to develop, test, and implement systems of security; the tension faced in India and the United States between the core mission of companies or research institutions and the needs of safety and security; similar tensions among free speech, privacy, and security in open, democratic societies; and the need to prioritize among a variety of domestic and international terrorist threats.

SELECTED THOUGHTS ON GOALS AND OPPORTUNITIES FOR COOPERATION

BUILDING ON THE SUCCESS OF THE WORKSHOP

Technical experts in a variety of fields associated with science and technology to counter terrorism provided presentations and engaged in frank discussions. These experts were chosen by the workshop organizers from the national laboratories, academia, and nongovernmental organizations of their respective countries. Over the course of the three-day workshop, they provided their perspectives, knowledge, and experience and shared ideas for possible future joint collaborations between India and the United States. Participants expressed their hopes that cooperation and collaboration on common problems would arise from this first step at sharing about the science and technology needs. The workshop was not intended to provide a particular plan of action or specific concrete next steps for this collaboration. Rather, it was intended to bring forth a variety of areas in which experts from the two countries can proceed with cooperative efforts in their areas of expertise based on identification of mutual goals and priorities. In subsequent phases of engagement, more specific topics may be identified and appropriate time and resources may be devoted to sustained and intensified cooperation.

Next: 1 The Realities of Terrorism in India »
India-United States Cooperation on Science and Technology for Countering Terrorism: Summary of a Workshop Get This Book
× 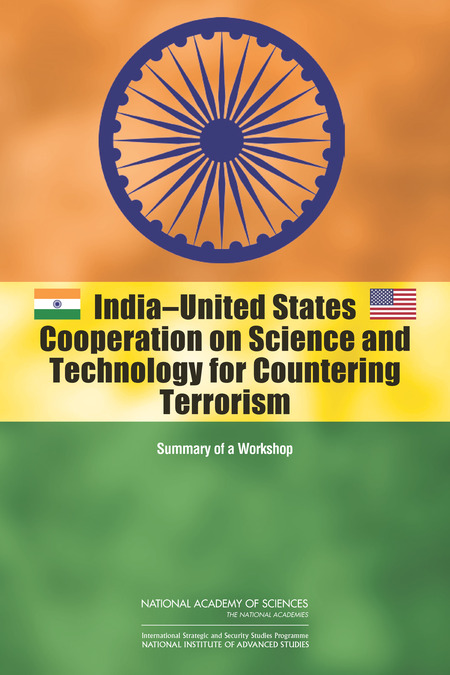 India and the United States are the world's two largest democracies with distinguished scientific traditions and experts in a wide range of scientific-technical fields. Given these strengths and the ability to learn from one another, the U.S. National Academy of Sciences together with the National Institute for Advanced Studies in Bangalore, India, held a joint Indian-U.S. workshop to identify and examine potential areas for substantive scientific and technical cooperation that can support counterterrorism efforts through the Homeland Security Dialogue and through direct cooperation. India-United States Cooperation on Science and Technology for Countering Terrorism is the summary of that workshop. This report examines topics such as biological threats; protection of nuclear facilities; security (physical and cyber) for chemicals, chemical facilities and other critical infrastructure; and monitoring, surveillance, and emergency response. The report also identifies and examines promising areas for further Indian-U.S. cooperation.