Making a World of Difference: Engineering Ideas into Reality (2014)

Visit NAP.edu/10766 to get more information about this book, to buy it in print, or to download it as a free PDF.
« Previous: Contents
Page 2 Share
Suggested Citation:"Letter From The President." National Academy of Engineering. 2014. Making a World of Difference: Engineering Ideas into Reality. Washington, DC: The National Academies Press. doi: 10.17226/18966.
×

Letter From THE PRESIDENT ifty years ago, on December 5, 1964, the National Academy of Engineering (NAE) was founded by the stroke of a pen when the National Academy of Sciences Council approved the NAEâs articles of organization. The first NAE Council, made up of its 25 founding members, quickly elected Augustus B. Kinzel president and Eric Walker vice president. The Making of the NAE: The First 25 Years presented the history leading up to and spanning the Academyâs founding. On the occasion of the Academyâs 50th Anniversary the essays presented here highlight the prodigious changes in peopleâs lives that have been created by engineering over the past half century and consider how the future will be similarly shaped. In public discourse the words âengineeringâ and âscienceâ are often used inter- changeably but, as any scientist or engineer will confirm, they are entirely differ- ent pursuits. Science discovers and understands truths about the greater world, from the human genome to the expanding universe. Engineering, for its part, solves problems for people and society, ranging from such handy innovations as displaying room temperature on your cell phone to devising ways to protect buildings against earthquakes to the enormous complexity involved in putting a man on the Moon. Engineering solutions encompass airplanes and automo- biles, information technology and communications, environment and health sys- tems, sustainability and energy sufficiency, computers and space missions, and much more. All of these solutions have evolved over time as people and society

required new technological capabilities to meet new needs. For instance, evolu- The fourth essay also reintroduces the NAE Grand Challenges for Engineering, tion in airplanes occurred when aluminum replaced wood in their construction a global vision proposed in 2008 describing urgently needed engineering solu- and when jet engines replaced propeller-driven engines, so that travelers could tions for tomorrowâs engineers to tackle. Meeting the Grand Challengesâmaking fly faster, more comfortably, and more safely. solar energy economical, engineering better medicines, and providing access to clean water, among othersâwill make the planet not only âa more tech- Over the past 50 years, engineering has transformed our lives literally every day nologically advanced and connected place, but also a more sustainable, safe, and it will continue to do so going forward, utilizing new capabilities, creating healthy, and joyous placeâin other words, a better place.â The Grand Challenges new applications, and providing ever-expanding services to people. For exam- represent the first global calling to engineering on behalf of the planet, a call that ple, not everyone thought they needed the iPhone when the first model was transcends countries, cultures, and continents. introduced in 2007. I recall the moment when I became hooked on mine. I was at my cabin in the mountains of California when, in an emergency, I urgently The past half century verifies that by advancing science and engineering we gain needed a veterinarian late on a Sunday afternoon. My iPhone directed me to the an accelerating growth in both knowledge and technological capabilities that nearest open veterinary emergency room, which was 40 miles away in another benefit people and society. I hope that these essays will underscore for you the state. Without the phone, I never would have found that vet. depth, breadth, and importance of engineering to human health, wealth, and joyâto humanity itself. My storyâmultiplied by the experiences of everyone who has adapted to new technology, whether the telephone and the automobile or the computer and the jet planeâcaptures the way engineering innovations quickly become integrated into our normal daily lives. These essays look at some of the areas of personal and societal life in which that seamless integration and the service provided has been evident over time. Three essays look at engineering innovations and solu- tions in the decades centered on 1964, 1989, and 2014. The fourth offers visions â C. D. Mote, Jr. of what engineering may deliver in the next half century. President, National Academy of Engineering Engineering Ideas into Reality 3

Next: 1964 Dawn of the Digital Age »
Making a World of Difference: Engineering Ideas into Reality Get This Book
× 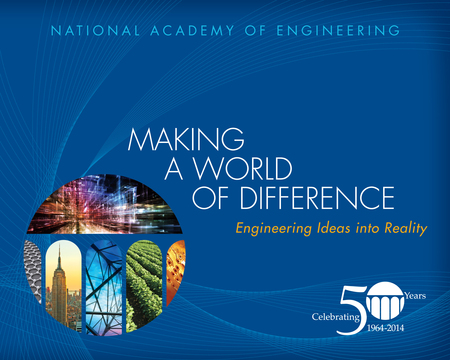 Fifty years ago, the National Academy of Engineering (NAE) was founded by the stroke of a pen when the National Academy of Sciences Council approved the NAE's articles of organization. Making a World of Difference commemorates the NAE anniversary with a collection of essays that highlight the prodigious changes in people's lives that have been created by engineering over the past half century and consider how the future will be similarly shaped. Over the past 50 years, engineering has transformed our lives literally every day, and it will continue to do so going forward, utilizing new capabilities, creating new applications, and providing ever-expanding services to people. The essays of Making a World of Difference discuss the seamless integration of engineering into both our society and our daily lives, and present a vision of what engineering may deliver in the next half century.