Chapter:A2 Chikungunya at the Door - Dj Vu All Over Again?--David M. Morens and Anthony S. Fauci

Get This Book
Visit NAP.edu/10766 to get more information about this book, to buy it in print, or to download it as a free PDF.
« Previous: A1 Animal Reservoirs of Middle East Respiratory Syndrome Coronavirus--Jonathan H. Epstein and Kevin J. Olival
Page 133 Share Cite
Suggested Citation:"A2 Chikungunya at the Door - Dj Vu All Over Again?--David M. Morens and Anthony S. Fauci." Institute of Medicine. 2015. Emerging Viral Diseases: The One Health Connection: Workshop Summary. Washington, DC: The National Academies Press. doi: 10.17226/18975.
×

CHIKUNGUNYA AT THE DOOR—DÉJÀ VU ALL OVER AGAIN?2

In 2008, we noted that the global reemergence of dengue fever threatened U.S. residents (Morens and Fauci, 2008). An outbreak of locally acquired dengue subsequently occurred in Florida, and the risk of U.S. dengue outbreaks will probably continue indefinitely.

We now face a new threat posed by the unrelated chikungunya virus, which causes a disease clinically similar to dengue in a similar epidemiologic pattern, which is transmitted by the same mosquito vectors, and for which we also lack vaccines and specific treatments.

In December 2013, an outbreak of chikungunya fever appeared in the French sector of Saint-Martin/Sint Maarten and spread epidemically throughout the French West Indies to other Caribbean islands and contiguous Central and South American countries. By July 11, 2014, the Pan American Health Organization had reported more than 355,000 suspected and confirmed cases of chikungunya fever from more than 20 countries or jurisdictions in the Americas, with continuing local transmission and epidemic spread.

In 2014 in the continental United States, 232 imported cases of chikungunya fever had been reported as of July 15, according to the National Center for Emerging and Zoonotic Infectious Diseases at the Centers for Disease Control and Prevention (CDC); many of these cases occurred in the 14 or more states that harbor the classic mosquito vector, Aedes aegypti, that is capable of supporting

local chikungunya transmission. Moreover, an even more tenacious vector mosquito, Ae. albopictus, has established itself in at least 32 states over the past three decades.

Chikungunya is an arbovirus (arthropod-borne virus) first described during a 1952 outbreak in southern Tanganyika (now Tanzania). It is an RNA virus within the alphavirus genus of the Togaviridae family. The name “chikungunya” derives from a word in the Kimakonde language meaning “to become contorted” or “to walk bent over,” an apt description of the appearance of some infected people with arthralgias.

Typically, chikungunya disease manifests as acute onset of fever and prostration, muscle and joint pains, lymphopenia (as in many arboviral diseases), and frequently a nonspecific maculopapular rash that can be difficult to identify in dark-skinned patients. Symmetric arthralgias are usually prominent in phalanges, wrists, and ankles; after 1 year, at least 20% of patients still have severe recurrent joint pains. The case fatality ratio is about 1 per 1000, with most deaths occurring among newborns, the elderly, and the debilitated. The differential diagnosis for chikungunya includes dengue and other arboviral infections, as well as influenza. Chikungunya is distinguished from dengue clinically by persistent or recurring polyarthralgias, which are uncommon in dengue, and epidemiologically by a low rate of asymptomatic infection (as low as about 4%, vs. 50% or more with dengue).

Patterns of chikungunya emergence and reemergence are complex and incompletely understood. Mosquito-borne arboviruses typically exist in locale-specific enzootic cycles involving nonhuman vertebrates and one or more mosquito vectors. They may occasionally break out of their ecologic niches to infect humans, but human outbreaks are usually constrained by proximity to enzootic foci. For example, both St. Louis encephalitis virus and West Nile virus are flaviviruses that circulate in enzootic mosquito–bird–mosquito cycles. Spillover cases and outbreaks in humans are temporally, climatically, and geographically restricted by human exposure to these enzootic cycles, which leads to a pattern of sporadic and unpredictable, but local, reemergences.

Rarely, however, an arbovirus may evolve to permanently escape its enzooticity and become established as a human disease that is spread in a mosquito–human–mosquito cycle. Only three important arboviruses are known to have achieved this feat: the flaviviruses yellow fever and dengue, and chikungunya. Despite their phylogenetic distances, each of these viruses has become adapted to transmission by Ae. aegypti, the vector now provisionally implicated in the Caribbean chikungunya outbreaks (Weaver, 2014).

The epidemiology of chikungunya, like that of dengue and yellow fever, is related not only to mosquitoes and their environments, but also to human behavior. The warming and drying of North Africa about 5,000 years ago probably forced ancestral arboreal mosquitoes (Ae. aegypti formosus) to adapt to new environments in which humans were increasingly storing precious water (Powel and Tabachnick, 2013). This adaptation provided access to new mosquito breeding

sites, leading Ae. aegypti to develop as a subspecies closely tied to human habitation and creating a new ecologic niche into which evolving viruses could move. European involvement in West African slave trading, which began about 500 years ago, spread Ae. aegypti mosquitoes and their viruses around the world. The emergence of yellow fever, dengue, and chikungunya is thus a story of human behavior driving vector adaptation, which in turn has driven viral adaptation.

Over the past five centuries, these three diseases have caused periodic epidemics in tropical regions. Phylogenetic evidence suggests that chikungunya may have emerged and evolved in Africa, developing into distinct, distantly related West African and East Central South African (ECSA) clades. According to historians, chikungunya fever arrived in Asia and the Americas two or more centuries ago to cause, among other outbreaks, a notable epidemic in Batavia (now Jakarta) in 1779 (Carey, 1971) and a pandemic involving parts of the Western Hemisphere in the 1820s. These outbreaks were at the time called dengue, since chikungunya was not fully distinguished from dengue until the 1950s (Carey, 1971). Chikungunya may thereafter have left Asia and the Americas, only to return to Asia in the mid-1900s in the form of a new ECSA lineage (Weaver et al., 2012) transmitted by Ae. aegypti.

In 2004, another ECSA chikungunya virus spread pandemically from East Africa across the Indian Ocean, causing epidemics and seeding outbreaks as far away as Italy, France, and Southeast Asia. In the process, the virus acquired envelope gene mutations, giving rise to an ECSA Indian Ocean Lineage (IOL). These mutations significantly increased viral transmission by a different mosquito vector, Ae. albopictus—the vector that has been spreading globally and causing dengue outbreaks in the United States and elsewhere. There was little or no concomitant reduction in transmissibility by Ae. Aegypti (Weaver et al., 2012). Thus the new IOL chikungunya lineage could now be efficiently transmitted by each of the two mosquito vectors.

Surprisingly, preliminary viral genetic data from the Caribbean implicate not this current pandemic IOL strain but the older Asian chikungunya strain, which is so far unadapted to explosive Ae. albopictus transmission (Weaver et al., 2012); indeed, Caribbean data so far suggest that Ae. aegypti is the principal vector (Weaver, 2014). It appears that an epistatic mutation in the Asian–Caribbean chikungunya lineage may restrict transmission by Ae. albopictus, one of the two important potential Western Hemisphere vectors (Weaver et al., 2012).

Nevertheless, the course of the burgeoning epidemic in populations not previously exposed to alphaviruses offers little room for optimism: the growing number of imported chikungunya cases in the Americas raises concerns about possible future local transmission. The possibility that the Western Hemisphere may actually have experienced a chikungunya pandemic in the past (Cary, 1971) is hardly reassuring. The potential for chikungunya to become established in the Western Hemisphere, either in an urban mosquito–human–mosquito transmission cycle or in an enzootic cycle involving other vertebrates, must be considered.

Next: A3 Emerging Infectious Diseases: Threats to Human Health and Global Stability--David M. Morens and Anthony S. Fauci »
Emerging Viral Diseases: The One Health Connection: Workshop Summary Get This Book
× 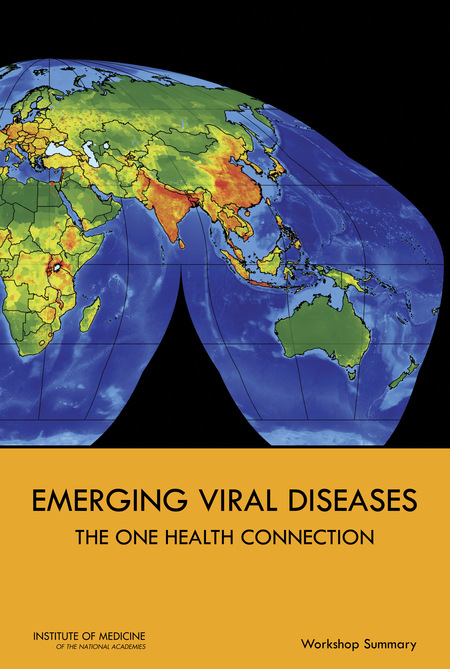 Emerging Viral Diseases is the summary of a public workshop hosted in March 2014 to examine factors driving the appearance, establishment, and spread of emerging, re-emerging and novel viral diseases; the global health and economic impacts of recently emerging and novel viral diseases in humans; and the scientific and policy approaches to improving domestic and international capacity to detect and respond to global outbreaks of infectious disease. This report is a record of the presentations and discussion of the event.